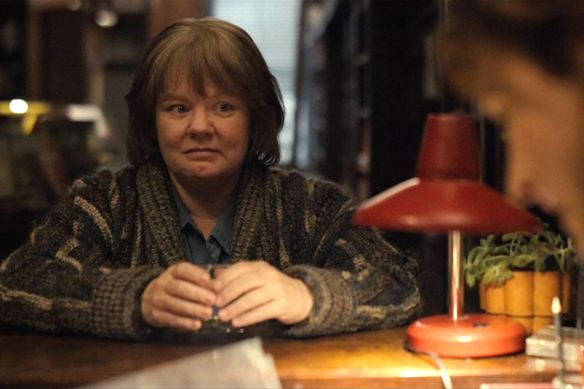 Melissa McCarthy awaits that call from the Academy.

It’s a tough old world out there and anyone who tells you differently is trying to sell you something. Sometimes we find success only to have it snatched away from us and before long, desperation begins to set in as the bills begin to pile up.

Lee Israel (McCarthy) was a successful writer – her biography of columnist, raconteur and perpetual game show contestant in the 1950s Dorothy Kilgallen landed her on the New York Times bestseller list. Those days are long gone; a disastrous biography of cosmetics maven Estee Lauder was in the cut-out bins almost as soon as it was released. Her caustic personality hasn’t endeared her to publishers or her agent (Curtin) and nobody but nobody wants to hire her – in addition to her prickly personality her style of biographies have gone out of favor with the public while caustic tell-alls are all the rage. Her agent tells her bluntly she needs to find another way to earn a living.

This is New York City in the 1990s, one of the most expensive places in the world to live and Lee is 51 years old with no job experience other than writing. Her alcoholism has become so pronounced that when she does find a job as a copy editor, she actually brings her glass, ice and booze into the office, a big no-no. So with her rent months overdue and her beloved cat ill and needing medicine that she can’t afford and in any case she has an unpaid balance that needs to be paid before the vet will even look at the cat, she hits rock bottom.

She sells a letter from Katherine Hepburn that nets her an unexpectedly high amount of cash from a local bookseller but when she discovers a Fanny Brice letter, the bookseller who buys it (a lovely Dolly Wells) gently tells her that the contents of the letter are a little bland, so she can’t give her as much as she’d like to. Undeterred, Israel decides to rewrite the letter for which she gets a handsome fee. Now realizing that this could be a lucrative source of income for her, she begins forging letters out of whole cloth from gone but not quite forgotten stars like Noel Coward, Marlene Dietrich and Dorothy Parker who Lee is particularly adept at imitating.

Lee begins to celebrate by drinking more, endearing her to the closest thing she has to a friend – gay, drug-addicted fading man about town Jack Hock (Grant) who shares a catty wit with Lee who mainly tolerates him but when she starts letting him get close, she soon realizes that there was a reason that she has isolated herself from people. Besides, the FBI has discovered her little game and soon she appears on a list of people forging memorabilia from stars and nobody will buy from her. She has to rely on Jack to sell her letters – and Jack isn’t exactly the most reliable guy on the planet.

Some will have a tough time with this because McCarthy is almost too good at portraying Israel’s notorious misanthropic side. Near the end of the movie cracks begin to appear in her armor and even as her deeds are coming crashing down around her, one gets the sense that McCarthy might have preferred a less humble Lee at the end of the film.

But for the most part the script is funny and smartly written by Nicole Holofcener – one of my favorite writer/directors out there – and Jeff Whitty. We also get a nice epilogue which explains what happened to both Jack and Lee (both have since sadly passed away) and lets us know that Lee’s wit was just as caustic as ever even after she did her time. This is a strong indie which may have some Oscar buzz around it going into Awards season; keep an eye out for it if you are motivated by such things.

REASONS TO GO: The script is smart and funny. McCarthy does a not-quite-Oscar-worthy turn here.
REASONS TO STAY: Israel is so unlikable that it is difficult to root for her.
FAMILY VALUES: There is a pretty fair amount of profanity (some of it sexual) as well as some brief depictions of drug use.
TRIVIAL PURSUIT: McCarthy’s husband Ben Falcone was attached to the movie before she was. When Julianne Moore who was originally cast as Lee Israel backed out over creative differences, Falcone recommended his wife for the role.
CRITICAL MASS: As of 11/6/18: Rotten Tomatoes: 98% positive reviews. Metacritic: 87/100.
COMPARISON SHOPPING: The Hoax
FINAL RATING: 7.5/10
NEXT: The Long Shadow