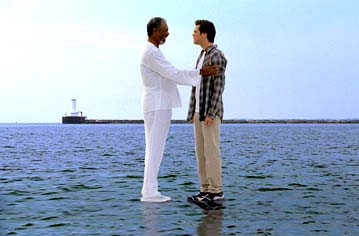 Walking on water is no big deal to these guys but STANDING on water, now that's a feat!

Not being the biggest fan of Jim Carrey in the world, I came into this movie fully expecting to, at best, just tolerate my two hours in his company. Then, something funny happened on the way to my expectations; I actually found myself laughing. I was enjoying America’s favorite rubberface.

Carrey plays Bruce Nolan, an on-camera reporter for a Buffalo television channel who dreams of being an anchor, of being respected and admired by the community. He is known for doing the “lighter” news and for being taken less seriously, both by his colleagues and the community. Just when he thinks he’s getting somewhere, a smarmy colleague (Carell) goes behind his back and nabs the anchor job Bruce wanted. When Bruce finds out (in the middle of a live feed from Niagara Falls), he loses it and consequently, gets canned.

His long-suffering girlfriend Grace (Anniston) waits patiently for Bruce to commit, but he is way too absorbed in his own career to notice. And as things begin to go wrong, Bruce looks to God for answers. The answers that come, however, aren’t much to Bruce’s liking, and the newscaster launches into a tirade against the Almighty, blaming Him for all of Bruce’s troubles.

Of course, this being Hollywood, God hears Bruce and God responds with an invitation to visit Him in His office. And God looks uncannily like Morgan Freeman, which is pretty much how I imagined Him too … well, OK, more in a George Burns kind of way, but close enough.

Since Bruce thinks he can do a better job than the Big Guy, God invests Bruce with His powers and invites him to take over the job (which works out, since Bruce is between positions at the time). Now, Bruce happens to be a broadcast journalist, which is to say, completely self-absorbed, so naturally he uses his powers to resurrect his stalled career, utilizing a few “scoops” (conveniently “discovering” the body of Jimmy Hoffa in a police training ground, and “happening” to be around when a meteor hits. And when it comes time to answer prayers, Bruce just grants them … with devastating effect.

I like the movie for a lot of reasons. For one thing, it’s not an over-the-top Jim Carrey-fest, which I feared it would be. If the Ace Ventura movies were your speed, you may be disappointed with how subdued Carrey is here. Aniston is wonderful; at this point in her career she was catching up with Meg Ryan as the queen of romantic comedy, a title which has sadly eluded her since.

This is a movie that is not so much about faith as it is about values. Bruce is unhappy mainly because he confuses his own needs with his value system. The things that he is chasing with nearly obsessive focus are transitory and in the scheme of things, only self-defining at the surface. The deeper, intrinsic things that define us are the things we tend to push aside in favor of career and acclaim. Faith merely helps us see what is already there.

The sight gags and effects are pretty nifty, and there’s a really awesome sequence wherein Bruce sabotages the backstabbing anchor using his powers to – well, make him speak in tongues.

I didn’t expect to like this movie as much as I did. There is a certain sweetness to it, and the leads are well-cast and lovable, and the message is a bit deeper than the average summer comedy. Any movie that can make me cry and laugh in the same two hours is doing something right.

WHY RENT THIS: Carrey is at his most appealing and Aniston shows why she is one of the best comediennes today. Appealing, warm-hearted and doesn’t beat you in the face with a message of faith. Freeman makes an awesome God!

WHY RENT SOMETHING ELSE: A little more schtick than there needed to be.

FAMILY MATTERS: Some of the humor is a little crude, and there is a bit of foul language and sexuality as well.

TRIVIAL PURSUITS: The riot scene was filmed in the Universal backlot set made famous as the town square of Hill Valley. The clock tower can clearly be seen.

NOTABLE DVD FEATURES: There are some outtakes and bloopers, but that’s it.

BOX OFFICE PERFORMANCE: $484.6M on an $84M production budget; the movie was a blockbuster.