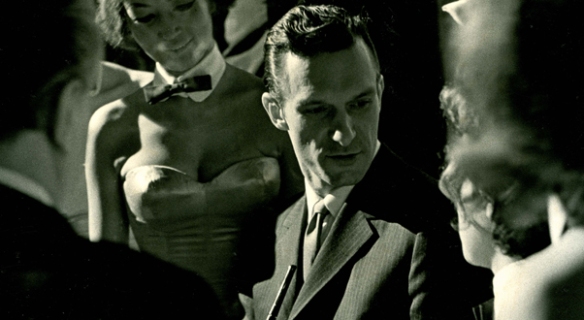 There have been many polarizing figures in the 20th century. Ronald Reagan, for example; conservatives look at him as a great president, one whose economic philosophy have shaped our economy for the past thirty years and have led us to unprecedented prosperity. Liberals look at him as the architect for our greed-dominated society and see his presidency as an American tragedy.

Hugh Hefner gets the same sort of reception. The publisher of Playboy magazine is responsible for the popularization of the centerfold. To the minds of the radical feminists, he has led to the objectification of women and is indirectly or directly responsible for the rape and abuse of women by men who have bought in to his philosophy. To conservatives, he is an immoral man, dedicated to the destruction of American society and the corruption of American morality.

Most people see the swinging lifestyle; the pajamas, the pipe, the smile and the 20-something women cavorting at the Shangri La-esque Playboy mansion. They see an octogenarian with seven girlfriends young enough to be his great-great granddaughters and yes, there is an element of the ridiculous to it. Overkill at the very least.

But there is more to Hef than meets the eye, and those who have followed his career will know that. Hef has been a crusader for First Amendment rights through his magazine, supporting the legal defense of those rights (often with cash donations) and during the Blacklisting era, printing pieces by Dalton Trumbo and other writers who could get no work elsewhere.

He has also been a champion for civil rights. His Playboy clubs and “Playboy After Dark” television show gave exposure to African-American performers who might never have gotten an audience. Sammy Davis Jr., Dizzy Gillespie and Dick Gregory all regularly worked in Hefner’s establishments. He supported Martin Luther King’s agenda both editorially and with contributions to his cause.

And he has also defended women’s reproductive rights as well as their civil rights as well. He has supported the “Equal Pay for Equal Work” theory as well as nurturing the careers of women into executive positions at his own company. He works tirelessly for the environment as well as for the preservation of jazz, an art form he’s passionate about.

Berman was given unprecedented access to the magazine’s archives and to Hefner’s own personal collection of letters and documents; she also was able to get her hands on footage from Hefner’s television shows which are some of the most fascinating moments of the film.

Hefner is often simply thought of as a pornographer and a fairly mild one at that; his pictorials tend to be much more artistic and less hardcore than those of, say, Larry Flynt or Bob Guccione. In some ways, he’s rather archaic – Playboy is essentially less of a factor in publishing the pictures of naked women than the Internet is. His legacy, however is far more complicated.

Hef didn’t invent sex but he brought it out of the recesses of puritanical dogma. He didn’t make it okay for women to like sex, but he supported the concept and helped popularize it. He didn’t objectify women – that’s been around far longer than Playboy – but he did help develop what the male ideal was for women physically (can we all say big boobs?) and make being a centerfold an aspiration for many women.

Tarring Hefner with the brush of a pornographer misses the point of what he’s done, and is rather simplistic and naive. I don’t always agree with his lifestyle and I wonder why he has rarely gone for women closer to his own age – I also wonder if there is too much emphasis on sex in his philosophy. Sex is, after all, only a part of life and while it is an important part, it’s not the most important part.

But that’s once again not all there is to Hefner. He has championed causes that have needed a champion, and has stood up for things that were unpopular back in the day. Most importantly, he has helped usher in a change of American values and hopefully, not all of it has to do with sex. Some of it has to do with compassion and the dignity of all people. Hugh Hefner may not be a hero to most, but in all honesty he deserves to be and this movie captures that largely unremarked upon aspect of him.

WHY RENT THIS: A fascinating look inside the legend. Some great footage from the old “Playboy After Dark” television show.

WHY RENT SOMETHING ELSE: Doesn’t really challenge much. Presents Hef as a bit of a saint.

FAMILY VALUES: There is some nudity (of the Playboy centerfold variety) and a bit of sexual content as you might imagine.

BOX OFFICE PERFORMANCE: $10,000 on an unreported production budget; I suspect the movie was unprofitable.