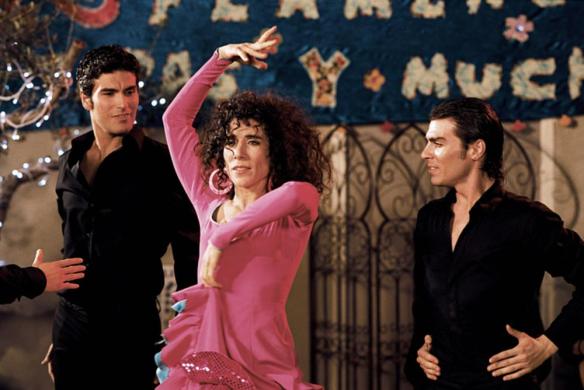 When I was a kid, my parents used to host dinner parties from time to time – not on a regular basis but at least once or twice a year. When their adult guests would arrive, we’d be ushered off to our rooms which we were frankly happy enough to do – in our view, adults were boring, uncultured sorts who didn’t even have the foggiest idea of the serious intellectual properties of Scooby Doo.

These days, I get the sense that dinner parties are something of a lost art. Four or five couples at a dinner table talking about adult subjects? For one thing, how many of them could stay off of their cell phones for three or four hours? And of course these days opinions on current affairs are mostly excuses for shouting matches unless of course you invite people who agree with you politically and then what sort of fun is that?

The French however have kept this art form alive – and a good dinner party is very much a work of art. ML (Viard), a high-powered attorney, and her husband Piotr (Boon) are hosting such a dinner party and they’ve chosen an auspicious occasion – the celebration of Parisian street music known as Fete de la musique which takes place every 21st of June. Piotr, of Polish descent, will be the chef and has chosen as the main entree a stew called bigos (which in case you’re interested in trying out yourself the recipe is listed during the end credits courtesy of Seigner’s husband, director Roman Polanski).

On the invitation list is Melanie (Fois), a gynecologist who has been carrying on an affair with a jockey and is preparing to leave her husband Alain (Bruel), a kind oncologist who genuinely cares for his patients and who has no idea what is going on behind his back (to be fair, ML is carrying on with the contractor who supervised the remodeling of her kitchen). Lucas (Thompson), an overbearing sort who works for a rival firm and is attempting to get ML to jump ship, as well as Lucas’ wife Sarah (Seigner) who has all the self-confidence of a student driver behind the wheel of their first driver’s education class.

Also on board is Juliette (Hands), ML’s sister who has grown distant from her sibling and who has brought an older gentleman, Erwann (Chesnais) who may or may not be her lover. Arriving late is ML’s flamenco teacher Manuela (Li) who has dreams of opening up her own school as well as Jean-Louis (Stocker), the previously mentioned contractor who is ML’s lover. Arriving unexpectedly is Henri (Arditi), the father of Juliette and ML who has been estranged from his daughters for some time – and strikes up an unsuspecting friendship with Erwann.

Nearly all of the party guests are having an affair, just called off an affair or are thinking of having one. Apparently extramarital sex is much on the mind of the average Parisian and just as apparently most American critics are a bit squeamish about it. Sometimes it is difficult for Americans to look at extramarital sex in the same way that the French do, who are much more pragmatic about it and much less emotional than we Americans are. We tend to use words like “cheating” and “betrayal” in regards to it while the French have looked on it as a natural part of life. It is one of those cultural differences that both sides find the other hard to fathom.

So getting past that can be hard for an American audience, but it isn’t the aspect of the movie that should be dwelled upon. Ms. Thompson uses a flash-forward to illustrate the beginnings of significant changes in the lives of those who attended the dinner party which started as small events at the dinner party, reassembling those who had originally attended the party a year after the fact. It is a bit jarring when the first flash-forward occurs but once one understands that they are viewing two separate parties than it begins to make sense.

This is a very strong cast, with Viard, considered by some to be the French equivalent of Meryl Streep, in strong form as the very much conflicted hostess who is frustrated at being the support of her chronically unemployed husband whom she nevertheless loves. Boon, for his part, is better known as a comic actor but plays it straight nicely, Seigner has a small but juicy role and reaffirms why she is one of my favorite Gallic actresses working today and Bruel also pulls off some decent work.

The drawback to having this many guests is that not all of the stories are as compelling and while they all entwine and enmesh tightly, it does make for a rather ponderous pace as we move from one storyline to the next with the two dinner parties the linking thread. American audiences, used to a different sort of pacing, may grow restless with this. Take your Adderall before you watch it folks.

WHY RENT THIS: What could be more entertaining and stimulating than a French dinner party? Well-acted and well-written.

WHY RENT SOMETHING ELSE: Some of the storylines are less diverting than others. An occasional excess of fluff.

FAMILY VALUES: There are adult situations and some sexuality and occasionally foul language.

TRIVIAL PURSUIT: Daniele and Christopher Thompson are mother and son; she is the daughter of director Gerard Oury and actress Jacqueline Roman. She also was nominated for a screenwriting Oscar in 1976 for Cousin, Cousine.