Many children around the world live lives of hopelessness, despair and hard labor.

When we think of child labor and slavery, we tend to think of them as problems in the distant past. Slavery was eradicated, after all, in virtually every civilized nation on Earth. As for child labor, well, we took care of that at the beginning of the 20th century. Those are both heinous practices that are very much a part of our past but not of our present. I suppose you could be forgiven for thinking that.

But if you did think that, you’d be wrong. Child labor is a global issue, affecting products you consume on a daily basis. Well maybe in the Third World, you might think, but not here in the United States. Yes, here in the United States. A loophole in the existing child labor laws allows the agricultural business to employ children. These children are often exposed to pesticides and other chemicals without any sort of protection, do backbreaking work in the fields, and occasionally die from nicotine poisoning in the tobacco fields of North Carolina, absorbing the nicotine from the plant through their skin because their employers won’t provide them with gloves. If they did, they’d have to admit they were employing minors and a lot of agribusiness is uncomfortable doing that. Smoking isn’t just deadly to smokers as it turns out.

This well-researched documentary goes around the world to find children working in a variety of often dangerous jobs with many of them literally slave labor. They mine cobalt for lithium batteries in Africa and mica for make-up (to make it sparkly) in India. They harvest palm fruit in Indonesia for palm oil (used as a preservative in nearly everything we eat) as well as cocoa in Ghana. They work in factories in China assembling cell phones and weave rugs, make jewelry and embroider in India. Chances are much of what you are wearing right now if it was made outside the United States probably had a kid involved in making it at some point.

Same goes with everything you eat. Nearly all the chocolate devoured in this country comes from plantations that utilize child labor and the supply which comes from Ghana is almost always forced labor. Children are paid less if they are paid at all and they are more likely to be docile and less willing to stand up for themselves than adults. Children don’t form labor unions. Often they are beaten when they don’t meet quotas. They rarely get any sort of schooling, being forced to drop out so that they can work. Those that aren’t working as slaves generally do so because their families are starving and the income is needed to survive. All of this in the name of globalization and corporate profit.

For the most part the documentary is set up as most documentaries are – plenty of talking head interviews, footage both archival and current and graphics showing statistics and numbers. In that sense, Invisible Hands isn’t terribly innovative, although we get to go along on a child trafficking sting near the end which if those who were arrested are convicted could lead to ten years in prison or more.

There are organizations that monitor what’s going on with child labor and slave labor (two of the founders of one are some of the more articulate interviews here) and there’s even a Nobel laureate who goes beyond the courtroom to literally rescue kids from sweatshops in India. Kailash Satyarthi has been beaten and seen colleagues murdered in his crusade to rescue children – during the course of the film we see his team attacked by a mob and barely escaping with their lives.

The willful ignorance of big multinational corporations is also examined. Only Nestle was brave enough to send a representative (Frutigar) who is unaware that children are being exploited for their product – which is ironically aimed at children. Much of the problem is that nobody monitors the supply chain; subcontractors often take shortcuts when taking on contracts, leading to using kids as labor in order to maximize profit. It’s a sick, depressing cycle that revolves endlessly and given the pro-business bent of our current administration, one that is unlikely to be addressed anytime soon.

But there is hope. Rescued kids in India by the group Satyarthi runs are brought to Ashrams where they can slowly become whole again. They are generally reunited with their parents unless it is thought that they would be at risk of being sold again. There are those standing up for kids around the world. We can do it too by insisting that those who make the products we consume be responsible and monitor their supply chains in order to make sure that there are no violations of international and local labor laws. Companies like Pantene, Samsung, Nestle, Hershey, Sony, Cadbury, Maybelline, Kraft, Estee Lauder, Unilever, Kellogg’s, Microsoft and a variety of clothing lines should feel an economic response to make them better corporate citizens rather than just paying lip service. Generally a kick in the wallet is all they’ll ever respond to.

This is a vitally important documentary that should be seen by as wide an audience as possible. Although veteran documentary viewers may grouse a bit at how the information is presented, there is no argument that the information is compelling. Anyone who loves their children will be affected by the sight of miserable children separated from their families toiling in harsh and often dangerous conditions. It’s enough to break even a heart of stone.

REASONS TO GO: The filmmakers did their due diligence. Some of the footage is absolutely horrifying.
REASONS TO STAY: The layout is essentially standard documentary 101.
FAMILY VALUES: There is some violence as well as disturbing thematic material.
TRIVIAL PURSUIT: This is the first feature film for Tandon who began her career as a television journalist.
CRITICAL MASS: As of 11/25/18: Rotten Tomatoes: No score yet. Metacritic: No score yet.
COMPARISON SHOPPING: Stolen Childhoods
FINAL RATING: 7.5/10
NEXT: Upgrade 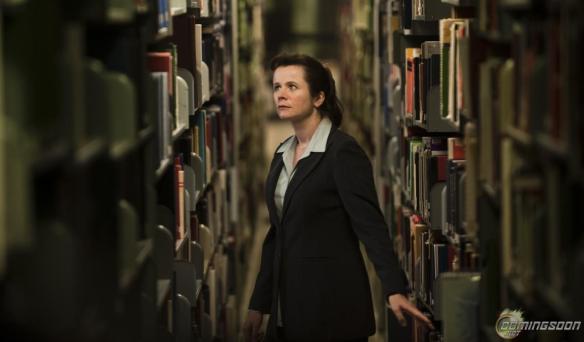 Emily Watson finds the Lost Ark of the Covenant.

Sometimes things are done with the best of intentions but upon further reflection are nothing short of evil. This propensity for doing horrible things for the best of reasons is true of governments as well as individual people.

Social worker Margaret Humphreys (Watson) ran a support group for orphans in Nottingham, England – home of the Sheriff.  While in the course of her duties, she discovers something monstrous, so much so that at first she is in disbelief.

Children of poor mothers – single moms, drug addicts, prostitutes – were routinely taken from their mothers, told their parents were dead and shipped out of England to points elsewhere in the Empire but mainly Australia. They were told that they would have oranges for the picking from trees and non-stop sunshine. The reality was that these children would be used as forced labor, many of them at Catholic-run facilities.

Humphreys would dig further and find out that there were literally tens of thousands of children who were affected since World War 2 (and in fact the practice had been going on since the mid-19th century). Approached by Charlotte (Holmes) begging her to help her find her mother, she ends up discovering that Charlotte has a brother, the suicidal and messed-up Jack (Weaving). She also helps the angry Len (Wenham) whom she eventually becomes friends with although at first he’s quite rotten to her.

She would start a foundation to help these kids which at times was funded but at others not. Because so many of the abuses took place in Catholic facilities, Roman Catholics particularly in Australia were downright hostile to her. The long hours and trips across the planet from Nottingham to Australia took a toll on her family life, with a husband (Dillane) who should have been nominated for sainthood holding down the fort at home. But in the face of governments who would be more than happy to forget about this practice (which continued until 1967) and the hostility of those who felt she was persecuting Catholics as well as her own yearning to be with her own family, could she possibly help all those who are in need of it?

This is a very powerful subject that should well provoke a deep emotional response in the viewer, but director Loach (son of veteran filmmaker Ken Loach) opts not to be too manipulative here. He could easily have demonized the government officials who mandated these decisions and the Catholic societies who behaved badly towards the children but he chooses not to make any villains here other than the policy itself.

Without a villain, there really isn’t the kind of conflict that would bring out that emotional response so instead the pressure goes on the shoulders of Watson as Humphreys to give a human face to the struggle and Watson delivers. One of the world’s most underrated actresses, she gives Humphreys a presentation as a flawed but compassionate woman, dogged in her determination to see justice done and these kids – now adults – be restored somewhat through reunions with their parents, or a vehicle for reparations for the wrongs done them. Weaving and Wenham both deliver memorable performances as well, as two men victimized in the same way but coping with it in very different ways.

The pacing is deliberately slow, maybe too much so. For the most part, Humphreys’ conflict is with apathy and that never makes for cinematic gold. Watson manages to overcome the film’s lack of inertia with a role that not only does justice to the real life Humphreys (who continues to work for these kids to this day) but also makes an unforgettable cinematic portrait of a real life unsung hero whose name is little known outside of England but really should be.

WHY RENT THIS: A tour de force for Watson. Weaving and Wenham are strong as well.

WHY RENT SOMETHING ELSE: Moves at a ponderous pace.

TRIVIAL PURSUIT: The scandal was portrayed in the documentary film The Lost Children of the Empire in which the real Humphreys appears.

NOTABLE DVD EXTRAS: There are interviews with the cast and production team.