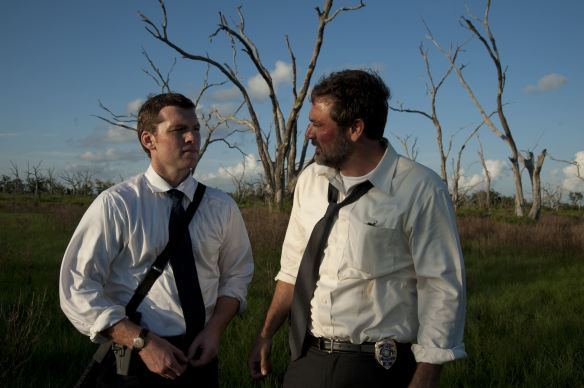 Some places are just bad. You can feel the malevolence when you walk into them. They seem to attract tragedy and trouble. The fields outside Texas City are like that. Half-swamp, they have periodically been a dumping place for bodies, particularly those of young females, over the years. The place has attracted a myriad of serial killers – and yes, this isn’t the movie. This is real.

In the movie however, we’re focusing on one killer but more to the point, to the cops chasing him. Det. Brian Heigh (Morgan) is a transplant from New York City. He’s a tough guy sure, but he has a tender side and the sight of a murdered girl on the pavement near the killing fields is enough to make him pray for her soul over her body.

His partner Mike Souder (Worthington) is a bit more cynical. A native of the Texas City area, he’s a fine detective but his personal life is all messed up. His ex-wife Pam (Chastain) works for a different law enforcement agency; it is in her purview that the fields fall whereas Mike and Brian are Texas City policemen. Mike is somewhat bitter about the break-up and wants nothing to do with Pam, even when it becomes clear that their investigation would benefit from working together.

Into this mix comes Little Ann Sliger (Moretz) – and yes, that’s her name, Little Ann. She’s a teen whose mother Lucie (Lee) is a drug addict whose parenting skills could use some work. Little Ann is the poster child for “at-risk.” Lucie is more interested in getting laid and getting high than getting Little Ann seen to, and consequently she’s getting into some increasingly serious trouble. Naturally Brian becomes protective of the young girl who is tough on the outside but tender on the inside – just like him. Brian’s wife Gwen (Gish) is less enchanted with the idea but keeps her peace.

As bodies begin to mount up, the suspicion begins to point to a local pimp, a malevolent thug and a kind of simple moron who can’t get away from trouble. All three are moving towards different conclusions but the one at the center of the murders is not one to let a cop get too close – and the collision course between pursued and pursuer is drawing near.

While this is said to be based on fact, there really is little more true here than that the killing fields near Texas City have become a notorious dumping ground for bodies of people from all over the I-45 corridor between Houston and Galveston. The script was written by a former DEA agent and has the kind of authenticity that can only come from someone who has lived the life and not just written about it.

If the directorial style looks familiar, it should. Mann is the daughter of Michael Mann who has made a career of some really good police procedurals including the Miami Vice series and movie as well as Collateral and Thief among others. She emulates her father’s style quite nicely, carrying a nice visual sense with a penchant for darkness and neon. Danny Boyle was once attached to this project but turned it down, saying that the script was so dark it would never get made. He went on to direct Slumdog Millionaire instead so I guess he made the right call seeing as he won the Oscar for it and all.

Morgan pulls out all the stops and delivers an impressive performance. His character is contradictory but not outside the realm of reason. He actually makes a pretty satisfactory partner for Worthington who does his best work here since The Debt. Mike’s got some issues of his own and certainly his scenes with his ex are some of the most incendiary of the movie.

What doesn’t work here is that the movie is so damn predictable. It starts out with the police procedural thing going on and any veteran watchers of Law and Order: SVU and CSI are going to have no trouble predicting what’s going to happen next. The last third is more or less a TV mystery movie with slightly rougher language and just as predictable.

There is a good movie here, although disappointingly enough, it’s not this one. In fact, this one’s just decent, memorable for Morgan and Worthington but little else. Chastain, who went on to greater heights, is also worth admiring here and Moretz acquits herself honorably as well (and ten points to anyone who can recognize Lee by face as the most famous corpse on TV nearly 20 years ago). However, you’ve seen this movie before unless of course you don’t watch a lot of these sorts of movies. Then and only then will it all seem new to you.

WHY RENT THIS: Morgan and Worthington make a good team, with Morgan particularly effective.

WHY RENT SOMETHING ELSE: A little anti-climactic. Relies too much on police procedural cliché.

FAMILY VALUES: As you would imagine there’s some violence, some sexual innuendo and plenty of bad language.

TRIVIAL PURSUIT: Worthington and Chastain previously teamed up in The Debt.

BOX OFFICE PERFORMANCE: $957,240 on an unreported production budget; I’m thinking this was not a money maker.