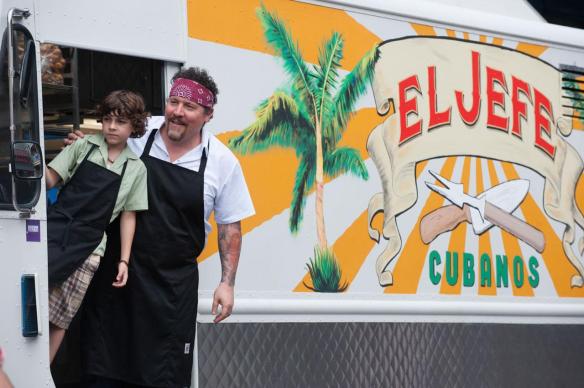 This might well be called the age of the Chef. We are more aware of those who cook are food than ever; some develop into a kind of rock star status with television shows, restaurant chains, food products and frequent appearances on talk shows. Getting to that point though takes a lot of hard work.

Carl Casper (Favreau) had reason to believe he was on that fast track to the big time. He came out of Miami as one of the most acclaimed up-and-coming chefs in the business, but it is certainly a business of “what have you cooked for me lately?” as that was a decade or more ago. Now, he toils as the head chef in a popular Beverly Hills eatery run by the control freak Riva (Hoffman). He’s lost his edge and his passion, cooking Riva’s menu even when one of the more influential bloggers and food critics Ramsey Michel (Platt) comes to review the restaurant.

That review goes very badly for Carl as Michel trashes the food but also Carl himself, blasting him for complacency and assuming the reason he’s put on so much weight is that “he’s eating all the food returned to the kitchen.” Carl takes it very personally, leading to a heated exchange with the critic which is caught on enough cell phones to go viral. Carl finds himself without a job and too much of an Internet punch line to get a new one.

On the personal front, Carl has an amiable relationship with his ex-wife Inez (Vergara) but his 10-year-old son Percy (Anthony) wants more of a relationship than his dad is able to supply right now. Percy lives in a perpetual state of disappointment when it comes to his father. Inez thinks that Carl needs to go back to his roots in Miami and get himself a food truck. Her other ex-husband Melvin (Downey) has one that’s pretty dilapidated but has some potential.

Right at his side is his former line cook Martin (Leguizamo) who is far more loyal than Carl maybe deserves, but between the two of them they come up with the best Cuban sandwich you may ever eat. They are going to drive the truck to L.A. from Miami with stops in New Orleans and Austin; of course, Percy will come along for the ride. This is a road trip that Carl needs to discover his passion not just for food but for life.

Favreau started out as a director doing Swingers which 20 years ago redefined the whole indie film genre and while Favreau has gone on to big franchise films for the most part, his heart has always been with these sorts of movies. The trouble with being an in-demand franchise film director is that there isn’t time for him to do small movies like this one. However, after excusing himself from the Iron Man franchise he went in this direction first and to his credit it’s a wise move.

Not that the Iron Man films are without heart but they are so much less intimate than a movie like this. Chef is often described as a foodie film (and I’m as guilty of it as anyone) but it really isn’t about food so much as it is about being an artist; Carl’s medium happens to be food. Inspiration is important to any artist; ask any artist who is working for somebody else how easy it is to have their own inspiration and style curtailed by someone who doesn’t understand art, doesn’t understand the artist.

One of the problems with art is that from time to time an artist will take themselves too seriously but this isn’t about the arrogance of the artist (although Carl certainly has some of that – art requires an absolute belief in your own talent) but about the artist who has lost their way and must find it again. First though he must find his own heart.

Kids can often be cloying in roles like this one but Anthony manages to avoid that. Sometimes he comes on a bit strong with the disappointed face, but other than that he has a very natural relationship with Favreau. The two seem genuinely fond of one another and that translates well to the screen.

Favreau, who often plays smartass sorts (maybe hanging around so much with Vince Vaughn early on in his career contributed to that) but while his character can be a bit of a dick sometimes, this is a much more mature character than we’re used to seeing from him although on paper, he is pretty childish in places. By mature, I mean a character that has a lot more depth to them than just one-line zingers. This is one of Favreau’s strongest performances to date both in front of and behind the camera.

And yes, you will leave the theater hungry, longing for a good Cuban sandwich or some fine beef brisket (Aaron Franklin, whose Franklin Barbecue in Austin is considered to be the best in the country by many experts, makes a cameo appearance showing off his brisket). That’s all right. For my own purpose I left the theater not just hungry for good food but for more films like this from Favreau.

REASONS TO GO: Warm without being overly sentimental. Will make you hungry. Realistic relationships.

REASONS TO STAY: Will likely end up somewhat dated.

TRIVIAL PURSUIT: Favreau was trained in knife-work and cooking techniques by Roy Choi, a well known fusion chef and food truck owner in the LA area who was also credited as a producer on the film (and makes a cameo appearance as himself).