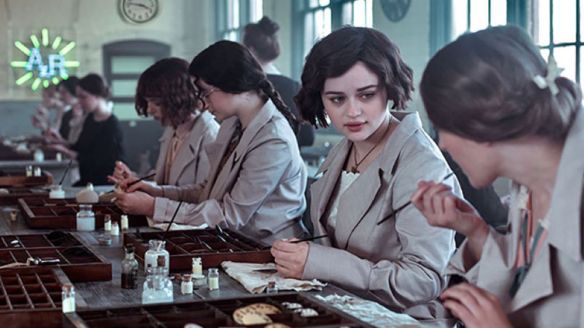 Where does their skin get that healthy glow? Radium!

Most of my readers will be too young to remember but there was a time when watches were painted with radium paint in order to make the dials luminescent. In the 1920s and 1930s, outfits like United States Radium and the Radium Dial Company employed women as young as 11 years old to paint the watch faces using camel hair brushes that the girls would dip into the paint and then paint the face of the watch. The brush would quickly lose its shape and the girls were instructed to use their lips to bring the brush to a point and then resume dipping and painting.

In 1928 the United States Radium Company employed 75 women in their New Jersey plant, including sisters Bessie (King) and Jo (Quinn). A third sister had also worked there but she’d passed away some months earlier. The girls are high-spirited, Bessie more so than Jo – especially after Jo falls ill. Bessie is really worried, particularly since Jo was by far the superior earner of the two (the girls are paid for each watch face they complete and Jo not only paints more of them but is far more meticulous). She asks the boss (Lloyd) if Jo can get seen by the company doctor, which he reluctantly agrees to.

The girls have been told that radium is perfectly safe; the company doctor tells Jo initially it’s just the flu and to drink lots of fluids and rest but Bessie insists on a thorough examination. The diagnosis comes back a syphilis, which is a bit amazing considering that Jo is a virgin. Bessie, never a radical, begins to discern a pattern developing among the girls at the factory who are all beginning to show symptoms of the same illness. Suspecting a rat, she sees a labor organization who helps her get a lawyer – she intends to hit United States Radium in the only place they understand; their wallets.

This is an important story and it deserves to be told. It has appeared on a number of different television shows, including 1,000 Ways to Die and other fact-based television shows. Books have been written around the girls as well as at least one stage play that I’m aware of. Oddly, it hasn’t been the subject of a theatrical feature until now and considering how important the case would become to labor laws in this country it’s almost inconceivable (and yes, I do know what it means). Perhaps because the victims were all women has it not gotten the coverage that’s warranted.

The movie is reasonably well-acted; the cast other than King is pretty much unknown but Pilcher and Mohler manage to get some pretty decent work tells me a lot about them as directors. They also are to be commended for their creative use of archival footage (and black and white recreations that look archival) that is inserted at various points during the film. That’s really imaginatively done and as a history buff I really appreciated it.

The main problem I had with the movie is that it feels too much like a movie of the week. That comes a great deal from the writing which has a kind of melodramatic feel to it. I’m not sure if the writers were trying to go for a period feel here or not but it doesn’t work. The movie is at its best not when it is showing us how horrible the rest of the world was to these women, but when it allows us to get to know who they were as people. Another thing I’m not sure of; I don’t know if the characters here were the actual Radium Girls from the U.S.R. plant in New Jersey or merely based on them. The names I’ve found for the actual litigants in the case were different than the ones given to the characters in the movie.

Also, the filmmakers failed to mention that there were two other groups of Radium Girls, one in Ottawa, Illinois who went through the same ordeal ten years after their New Jersey sisters did. That company, Radium Dial Company, had to have been fully aware of the dangers of radium and yet urged their employees to use the “lip, dip, paint” method anyway. It took eight trials (all of which were won by the litigants) for the Illinois Radium Girls to get the money they needed for medical expenses; it was a case of the company stalling so that the victims would die before they had to pay out anything. That gives you an idea of what monsters were running that company.

The real Radium Girls died real deaths that were terrible, gruesome and absolutely unconscionable. That they were abandoned to their fates by callous employers who saw them as expendable commodities that could easily be replaced only adds to the horror. It would be nice to say that things have changed a great deal since these events happened but sadly, they have not. The fact that the current administration is actively trying to strike down existing worker safety laws is proof enough of that.

REASONS TO SEE: Makes a wonderful use of archival footage.
REASONS TO AVOID: Feels too much like a Movie of the Week (in a bad way).
FAMILY VALUES: There’s some mild profanity and a bit of violence.
TRIVIAL PURSUIT: If you take a Geiger counter to the graves of the Radium Girls, it still registers as radioactive.
CRITICAL MASS: As of 5/7/19: Rotten Tomatoes: No score yet: Metacritic: No score yet.
COMPARISON SHOPPING: The Triangle Factory Fire Scandal
FINAL RATING: 6/10
NEXT: Girls of the Sun