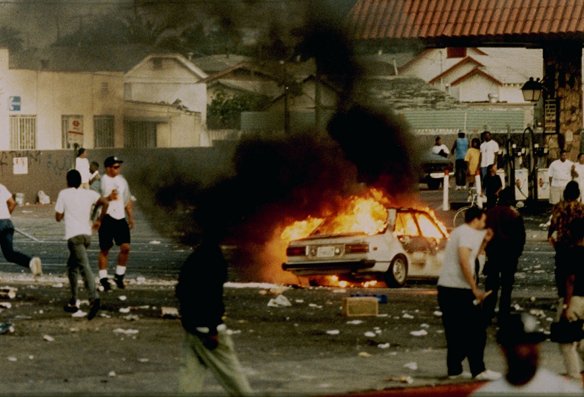 This year marks the 25th anniversary of the 1992 Los Angeles riots. There have been a number of documentaries that have been made to commemorate the event, including Burn, Motherf*cker, Burn and Let It Fall but for my money this is the best of the lot.

Filmmakers Lindsay and Martin take the bold step of utilizing no talking head interviews; the movie is made up entirely of archival footage and contemporaneous interviews that aired on the TV news and news magazine programs of the day. That’s a bit of a double edged sword in that while there is no “Monday morning quarterbacking” there is also no real analysis of the events; we are left to come to our own conclusions.

One of the best things about the documentary is that it show that the violence that erupted in April following the not guilty verdict for the cops that beat Rodney King didn’t occur in a vacuum. The filmmakers take great care in beginning with the events of the 1965 Watts riots that left 34 people dead (mostly African-Americans) and show the various incidents that led to a powderkeg growing in South Central Los Angeles.

In the era of Daryl Gates, the Los Angeles Police Department had become the enemy in the African-American neighborhoods of Los Angeles. Police brutality was not uncommon in the arrests of African-American suspects and to say that the police had an adversarial relationship with the black community is something of an understatement.

The powderkeg became primed when video surfaced of a brutal beat down of Rodney King, who led the police on a high-speed chase. King, an ex-convict out on probation, was driving while intoxicated and knew he would be sent back to prison if he was arrested. When he was ordered to get down on the ground, officers thought he was reaching for a weapon. A taser was used on King and then the horrifying beating in which cops used nightsticks as well as vicious kicks to hospitalize King.

It would have not gone beyond that except that a local resident named George Holliday, witnessing the incident used his brand new camcorder to capture the beating. When the cops showed little interest in the tape, he sent it to the news media. The resulting controversy caught the nation by storm and put the LAPD under a microscope. Although by that time I was living in Northern California, I grew up in Los Angeles and remember being ashamed to be an Angelino when this was going on.

Criminal charges were brought against the officers involved and the trial was moved to the mostly white suburb of Simi Valley. When the not guilty verdict was brought in, African-Americans were justifiably outraged, particularly since Korean shopkeeper Soon Ja Du had gotten off without serving jail time after shooting 15-year-old Latasha Harlins in the back of the head over a misunderstanding involving orange juice that he accused her of trying to shoplift.

The riot footage is brutal and disturbing. People are pulled out of their cars and beaten within an inch of their lives because of the color of their skin. Shops are torched and looted. The outpouring of fury was exacerbated by a stunning lack of leadership in the LAPD which led to police being withdrawn from the area which was left on its own to burn.

The riots took place before the ubiquitous use of smart phones to document everything, so mostly the footage comes from news sources although there is some home video footage that is shot, including the King beating which was one of the first examples of citizens using home video equipment to capture breaking news.

As a document of the riots and what led up to them, the documentary is superb. It presents the footage unemotionally and gives us some context that we didn’t have when the riots were going on. Yes, we don’t get a thoughtful analysis of how it changed the lives of those involved or how society in general was affected by them – other documentaries do a better job of that – for coverage of the riot itself and the immediate events that led to it the film is second to none.

The LA riots have continued to resonate over the years, leading directly to the Black Lives Matter movement which seems to indicate that there hasn’t been a whole lot of progress in the past quarter century, although ironically there has been in Los Angeles where the LAPD has become one of the most tolerant and most progressive police forces in the country. Still, it is disheartening that we continue to have the problems we do with racial relationships even given the events of the past 25 years.

This is a sobering documentary in which the old adage “two wrongs don’t make a right” is very much at issue. It shows what can happen when people feel pushed into a place where there is no other way out. It is also a warning that the powderkeg in South Central is also present everywhere and not just in African-American neighborhoods. Given the right circumstances, the kind of violence and horror that unfolded in April 1992 in South Central Los Angeles can happen anywhere.

REASONS TO GO: The filmmakers give the riots a great deal of context. Some of the archival footage is absolutely amazing. Some unsung heroes are brought to the forefront
REASONS TO STAY: This is definitely not for the faint of heart.
FAMILY VALUES: There are scenes of violence and disturbing images as well as profanity including racial epithets,
TRIVIAL PURSUIT: The film was nominated for a 2017 Emmy for prime time documentary merit.
BEYOND THE THEATERS: Amazon, Fandango Now, Google Play, iTunes, Vudu, YouTube
CRITICAL MASS: As of 8/11/17: Rotten Tomatoes: 86% positive reviews. Metacritic: 66/100.
COMPARISON SHOPPING: OJ: Made in America
FINAL RATING: 8/10
NEXT: City of Ghosts