Some movies defy simple description. Perhaps it’s because their director is a visionary who is filming outside the box; it might also be that the movie is just an unholy mess. Somewhere between Luis Brunel and Ed Wood is where this particular film lies.

The streets of Hanoi are unforgiving. Violent street gangs play out their songs of vengeance and violence in rain-drenched alleyways as the children of dead prostitutes try to eke out an existence by stealing wallets and selling Zippo lighters. The streets are prowled by a sinister ambulance whose doctor deliberately runs down people, occasionally rapes their corpses particularly when they are attractive women and consumes their flesh otherwise, sharing the tidbits with his corpulent son.

Women are tortured, their teeth pulled out and their flesh burned with cigarettes. What little romance lives in this world is snuffed instantly by the marauding ambulance. Among it all, implacable, are American corporate icons – Coca-Cola and Pepsi which one character waxes rhapsodic about the virtues of mixing the two soft drinks together into one mighty cola – as well as Kentucky Fried Chicken which is apparently the second choice of Vietnamese cannibals. I guess we really do taste like chicken.

This turbo-charged fusion of Grand Guignol, social treatise on globalization and slice of life for the marginalized is the brainchild of Le Binh Giang who took three years to get this hour long film made despite the powers that be claiming it was too violent and expelling him from University because of it. I can see where conservative professors might be confounded by this shocking hour of nearly every taboo being almost gleefully played out on the page or the screen. If you had any preconceptions of  Vietnam before watching this you’ll have them completely blown out of the water after this.

There is a story here but it’s told with flashbacks and flash-forwards and even those who are veteran cinema buffs might have some difficulty in following it. Things do get explained (more or less) by the end of the film but think of the story as something of a circle being closed and then dismembered with a machete. You may not understand what’s going on but I don’t think that it’s vital that you do.

There are some really wonderful images mixed in among the carnage and even the gore looks pretty much up to Hollywood standards. There is certainly an artistic aesthetic here but think of Herschell Gordon Lewis and Frida Kahlo having a love child and then handing it a camera. It’s lowbrow and highbrow all at the same time.

I’m not exactly what to think of this one. On the one hand, I admire the skill and imagination. On the other hand, this seems to be a pointless exercise in gratuitous gore and human depravity as well. I’m not sure what Giang had in mind when he wrote this and I suspect you won’t either. I gave it the middling rating because on the one hand there is much that is commendable about this film; on the other hand too many won’t be able to get past the excessive gore and taboo subjects. This is torture porn taken to its logical extreme.

=Fans of Orlando’s legendary Uncomfortable Brunch will likely find something enticing here and the cannibalism scenes will certainly go down more smoothly with pancakes and eggs. Whether or not this makes its way to Will’s Pub remains to be seen; it has no US distribution and not even an entry on iMDB. It is playing the New York Asian Film Festival and previously played Rotterdam so there is hope that eventually it will work its way to a more adventurous streaming service or a niche distributor. Either way, this is strictly for those who aren’t offended by much of anything. This is cinema for the discerning vulgarian.

REASONS TO GO: This is not what you’d expect from a Vietnamese film. There are some really impressive images here.
REASONS TO STAY: The graphic violence and gore may be off-putting to some. The story is told in a somewhat disjointed fashion.
FAMILY VALUES: Not for the young or the sensitive in any sense; it’s got violence, sex, cannibalism, graphic gore and bloodshed, profanity, sexuality, necrophilia and animal cruelty.
TRIVIAL PURSUIT: Giang submitted this film as a graduate project at the University of Ho Chi Minh but was denied graduation because the script was deemed too violent.
CRITICAL MASS: As of 7/6/17: Rotten Tomatoes: No score yet. Metacritic: No score yet.
COMPARISON SHOPPING: Slave of the Cannibal God
FINAL RATING: 5/10
NEXT: BnB Hell 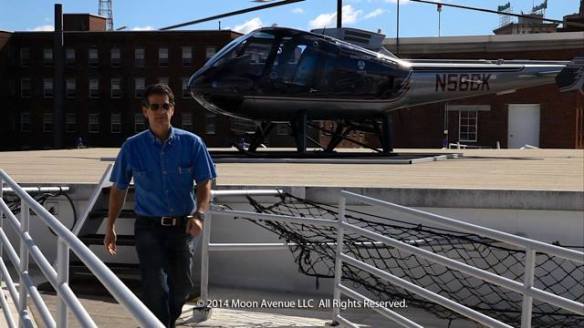 Who knew that the inventor of the Segway was such a badass?!

The problems of the world sometimes look so insurmountable that we feel helpless to do anything to remedy them. The truth is however that very often some of the biggest problems are resolved by a single person with the will, the drive and the expertise deciding to take that problem on and solve it.

Dean Kamen isn’t a household name but he should be. He is best known as the inventor of the Segway, the two-wheeled device that is sometimes used in place of walking tours. It is somewhat ironic that the device, which never caught on in the way he had hoped, is what has been up to now his legacy – he has since worked quite tirelessly in the medical field with among other things a portable dialysis device to his credit.

But Kamen isn’t satisfied with helping just a few people – he wants his legacy to be something more notable. As he correctly points out, half of the world’s illnesses are the result of water borne pathogens. If he could figure out a way to clean up the world’s water supply, he could empty half of the world’s hospital beds in a single stroke. Not a bad legacy to leave behind.

To successfully do this, he would need to develop a device that is easy to maintain, requires a minimal amount of power and is reasonably compact. All of these are matters of engineering and he and his team at his engineering think tank Deka Technology are very good engineers. So to make a long story short, he succeeded. The device exists. Testing it out in Ghana and Central America, the device proved to be successful.

The issue is getting them to where they’re needed and it is here that he hit his biggest roadblocks. Government agencies were unhelpful as were agencies like the United Nations and the Red Cross. Kamen’s frustration was palpable. What he needed was a distribution system.

Also the founder of the FIRST program and robotics competition which had outgrown its venue, Kamen had sought out a new venue for his competition and struck a deal with Phillips Arena in Atlanta. When he arrived in the Georgia city, he was struck by all the Coca-Cola signs around the arena and the city and was struck by inspiration – what product can be found in virtually every village in the world no matter how remote?

Coke wasn’t just a beverage he realized but also a delivery system. He contacted Muhtar Kent, the CEO of Coke who was intrigued with the idea. A bargain was soon struck – if Kamen could produced a certain number of devices, the Company would agree to underwrite the distribution of the devices and transport advisors who would teach the locals how to maintain it. In return, Kamen would invent for them a new soda fountain to replace the one they’d been using for more than half a century. Kamen came up with the Freestyle Coke dispensers, now in use at places like Burger King, Five Guys, AMC Theaters and Pei Wei.

The story is inspiring and it’s hard to believe that we are on the cusp of overcoming this problem – in a few short years the worlds water supply could well be completely cleansed. But equally inspiring is Kamen himself – he is an engaging personality, thoughtful and loquacious. By the film’s end you may well want to go invent something yourself. He also has a puckish sense of humor – he really took to the clapper which filmmakers use to sync the sound and film in the editing process. Throughout the film he claps his hands expertly to start the scene, which became kind of a theme among platinum passholders at the Festival who often “clapped” like Kamen just before a film screened.

While the movie drags a little bit in the middle as Kamen himself is bogged down in the bureaucratic red tape trying to get his invention out to where it is needed, this is a very good documentary that not only explains a major problem the world faces but also its solution which is somewhat rare for a documentary. It isn’t just the story of that problem that is engaging however, but also Kamen himself who keeps the interest of the viewer. That makes this one double threat of a documentary.

REASONS TO GO: Inspirational. Kamen is extremely articulate and likable.

REASONS TO STAY: Drags a little bit in places.

FAMILY VALUES:  Suitable for all ages.

TRIVIAL PURSUIT: The second film in Florida Film Festival history to take home both the Jury and Audience awards in a single category.

COMPARISON SHOPPING: If You Build It

NEXT: The Kill Team