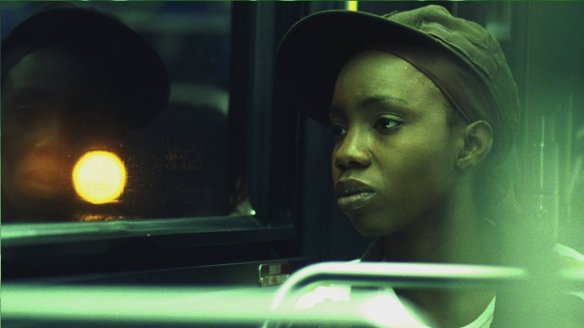 Discovering your own identity as a 17-year-old is difficult enough, but throw in that you’re an African-American lesbian into the mix and the obstacles are mind-boggling. Even in a relatively stable middle-class environment, becoming who you are can take the kind of courage that makes Kayla Jenner pale in comparison.

=Alike (Oduye), whose name is pronounced Ah-LEE-kay but is a misnomer because she’s anything but alike the rest of her circle, lives a dual life. The daughter of Arthur (Parnell), a police detective with a somewhat easygoing nature, and Audrey (Wayans), an extremely religious high-strung sort, she is by day a poet, a straight-A student who has earned a scholarship to a college on the West Coast (the family lives in Brooklyn). By night, she’s a budding lesbian who hangs out in a lesbian club with her openly gay friend Laura (Walker), and dresses in the uniform of a butch – loose baggy clothing, men’s underwear, doo-rag and ball cap. She only switches clothes on the bus ride home to avoid confrontation with her parents. She is also seeking to explore her sexual identity; she’s a virgin who really doesn’t want to be one anymore.

Audrey has a suspicion that her daughter might not be arrow-straight and disapproves of her relationship with Laura. Instead, she insists that she spend time with Bina (Davis), who is a devout church-going young woman. At first Alike hangs out with Bina just to placate her mother but soon begins to develop a crush on the young girl. When that leads to an unexpected physical encounter, the results are devastating.

While Audrey has suspicions, Arthur is more sanguine about his daughter’s sexual identity, although he is in complete denial about it. He believes her to be undergoing a phase and doesn’t imagine the depth of her true nature. While Alike has a better relationship with her father than her mother, she is realizing that she can’t live the life she’s leading for much longer. She needs to be who she is – only she’s not sure who that is quite yet.

Rees, who also wrote the film, based it largely on her own experiences as an African-American lesbian growing up in Brooklyn. She shows incredible promise as a filmmaker; the first ten minutes alone, in which she compactly sets up all the narrative you need to know about Akile’s background and circumstances, shows Rees’ background in short films have served her well. She is a bona fide storyteller.

She does occasionally devolve into cliches (particularly in the relationship between Arthur and Audrey) but for the most part she shows a singular voice. And while she sometimes is a bit leaden with her points about acceptance and homophobia within the African-American community, she can hardly be blamed for it in many respects although those who are less accepting of the LGBT community may find it overbearing in places.

That said, Rees gets a wondrous performance from most of her cast but particularly from Oduye on whose young shoulders most of this film rests. Oduye plays her role with immense dignity but also with incredible vulnerability. Alike is a poet with a sure voice but she is far from sure in her relationships even with those closest to her. Like most 17-year-olds, she is just trying to navigate her way through without the experience to help her avoid the rocks hidden under the water and so she occasionally wrecks her boat. Oduye portrays this without the excessive dramatics that other actresses have utilized in similar roles; to my mind she plays it more like an actual 17-year-old. Sure, there are tears but there’s also laughter and joy. This is a fully realized 17-year-old, complete with insecurities and angst galore but not so that’s all there is to her. She has a more difficult road than most but she handles it with such grace that at the end of the day you’d be proud to have her as your own daughter (or sister as the case may be).

This is a wonderfully authentic work of art that will take the viewer on an emotional ride through the life of a 17-year-old girl trying to discover what sort of woman she will be. It is not always easy and yes there are some moments that will be awkward. Not all of us will be able to relate to Alike but most of us should be able to admire her and if not understand her, at least sympathize with her. Hers is a viewpoint that should be experienced and isn’t that why some of us love movies in the first place?

WHY RENT THIS: Terrific performances from a mostly unknown cast. Powerful and emotional story.
WHY RENT SOMETHING ELSE: Occasionally hits the audience over the head with a lead pipe when a feather would have done.
FAMILY VALUES: There is pervasive sexuality and rough language throughout.
TRIVIAL PURSUIT: The movie was first made as an award-winning short with much of the same cast; the original short included Wendell Pierce from The Wire.
NOTABLE DVD EXTRAS: Featurettes about the importance of wardrobe to the film and to Alike’s self-identity, and a walk through the streets of Brooklyn; also interviews with the cast and crew.
BOX OFFICE PERFORMANCE: $769,562 on an unknown production budget.
SITES TO SEE: Netflix (DVD/Blu-Ray Rental only). Amazon, iTunes, Vudu, Flixster
COMPARISON SHOPPING: Blue is the Warmest Color
FINAL RATING: 7.5/10
NEXT: Woman Power concludes!