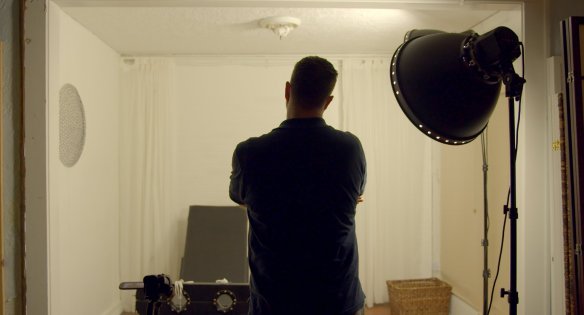 Once in awhile, a movie comes along that is a surprise to even the filmmakers. They start out making one story when all of a sudden it turns completely off the rails and heads into directions unknown. A good filmmaker will follow it as best they can. A great filmmaker will keep up with it and begin to help shape it themselves.

Journalist David Farrier from New Zealand has a tendency to follow quirky stories. When he saw an internet video for “competitive endurance tickling,” he thought at first it had to be a joke. When it turned out to be a thing, he thought it would make a great feature for his television program. He asked the producers of the videos he found, Jane O’Brien Media, he contacted them to set something up. To his surprise, he got a refusal. When he inquired as to why, he received sharply homophobic messages (David is gay) and as he pressed, the messages from the representative at Jane O’Brien Media became increasingly insulting and threatening.

His interest completely piqued, he asked for a face-to-face meeting with some of the people who worked for Jane O’Brien and met up with Marko Realmone and Kevin Clark, both members of the O’Brien legal team. The meeting didn’t go well and lawsuits were threatened if Farrier continued to pursue any sort of investigation. His journalistic senses now sensing a much different story going on, Farrier and his partner Dylan Reeve started digging into the world of the tickling fetish, speaking to David Starr, who makes fetish videos from his Orlando home, and Hal Karp who was a former talent scout for Jane O’Brien Media but who’d had a falling out with them since.

The more that Farrier and Reeve dug, the more they found instances of online bullying, threats and blackmail from Jane O’Brien Media to former employees and participants in the tickling videos which were essentially thinly veiled fetish videos. And as they did more digging going back to the online videos of one Terri DiSisto they discovered an alarming pattern of abuse, identity theft, harassment and internet fraud. Eventually all of this led back to one man: David D’Amato, the heir to a fortune from his lawyer father who seems to be the spider in the center of the web, a man who has jealously guarded his privacy. But what is he hiding?

This film, which played at the 2016 Florida Film Festival and can now be seen on HBO, is one that the viewer never knows what’s going to happen next. It is the kind of film that proves the adage “truth is stranger than fiction.” Although Farrier is making his feature film debut, he has tons of television experience and the movie benefits from it. The movie never drags and never fails to deliver twists and turns, some of them absolutely jaw-dropping.

The movie comes off like a suspense thriller and you feel a genuine sense of threat even as you think to yourself “this is an online bully hiding behind Internet anonymity” but at the same time you can’t be one hundred percent sure. Even during the Orlando sequence when Farrier portrays the fetish as an essentially harmless one (and thankfully so), there is a sense of menace that pervades the movie and one wonders if the lawyers will succeed in shutting down the pursuit of truth. This is a movie that illustrates just how important investigative journalism can be in finding out the truth even in the face of threats to career and reputation.

It should be noted that the D’Amato vigorously denies the veracity of the reporting here and insists that he is not involved with Jane O’Brien Media or Terri DiSisto in any way, despite documented evidence to the contrary. Lawsuits have indeed been filed although attempts to keep the film from being shown were unsuccessful.

While some may find the world of tickling fetish videos a bit too bizarre for their liking, to me this isn’t about the fetish so much as it is about control. Abuse thrives in silence and those who feel powerless often remain silent. Sometimes it takes someone with a powerful torch to cast light in the darkness and give a voice to the powerless. This is a terrific documentary which underscores just how necessary documentaries are.

REASONS TO GO: This is a movie that will literally keep you guessing. The value of good investigative journalism is shown.
REASONS TO STAY: It may be a little too bizarre for some.
FAMILY VALUES: There is a fair amount of profanity and some sexual situations.
TRIVIAL PURSUIT: The two directors, a producer, the executive producer and one of the actors were all sued in U.S. Federal District Court by D’Amato and others in an effort to stop the film from being shown.
BEYOND THE THEATERS: Amazon, Google Play, HBO Go, iTunes, Vudu, YouTube
CRITICAL MASS: As of 5/1/17: Rotten Tomatoes: 93% positive reviews. Metacritic: 76/100.
COMPARISON SHOPPING: Catfish
FINAL RATING: 7.5/10
NEXT: Winter Sun