Iran may as well exist on another planet by Western viewpoint. A religious oligarchy rules the country with an iron fist; people can be arrested for crimes of morality, and even executed for them. As with the United States, there are those in Iran who oppose capital punishment. Director Mohammad Rasoulof is one of them.

Already stripped of the right to make films in his native country, Rasoulof made this film surreptitiously and without government approval. It was smuggled out of Iran and played the Berlin Film Festival, where it achieved (justified) acclaim. Now appearing in art houses and on virtual cinema, the two and a half long film is an anthology of four stories, unrelated except all are about capital punishment in some form.

In the first chapter, Heshmat (Mirhosseini) is a middle aged man working for the government. He watches television blankly during the day, then goes to pick up his wife (Shoorian) from work and his daughter, whom he dotes on, from school. He goes grocery shopping for his infirm mother and helps clean her house. He dyes his wife’s hair and seemingly has a loving, bantering relationship with her. But he seems distracted – on his way to work at 3am the next morning, he pauses at a stoplight, even when it has turned green, staring into space. One wonders what he’s thinking about, before he jerks awake and proceeds on his way to work. There, we discover what he was thinking about in the most shocking way possible.

The second chapter finds Pouya (Ahangar), a military conscript doing his compulsory service, given an order that goes against his own personal morals. He talks with his fellow buddies, who warn him that failure to carry out his orders could get him court martialed, extending his military service and possibly preventing him from getting the passport his girlfriend is pestering him to get so they can emigrate to Austria. His decision on how to deal with his moral dilemma seems sudden and perhaps not thought fully through, but it is one that feels realistic.

The third chapter concerns another soldier doing compulsory service, Javad (Valizadegan) who is on a three day pass to visit his fiancée (Servati) and her family. He stops to bathe in a clear stream, and there is good reason for it as it turns out. He arrives when her family is mourning the death of a favorite teacher, who was executed. She is beginning to wonder whether there is a future for her in Iran; he has a secret that could conceivably tear the couple apart.

Finally, in the final story Bahram (Seddighimehr) and his wife Zaman (Shahi) welcome their niece Darya (B. Rasoulof) visiting Iran for the first time from his brother’s home in Germany. The couple have isolated themselves in the sticks, working as beekeepers after he had trained to be a doctor and she had been a pharmacist. There is a strained, awkward feeling between the three; Bahram has something to tell Darya but doesn’t know how to do it. When he does finally admit what he has to say to her, it is an absolutely devastating emotional moment for the film.

Whether or not you agree with capital punishment, this is a movie that resonates on every level, looking at the subect from a variety of points of view. It depicts the effects of decisions to participate in capital punishment – or at least to look the other way – on lives and relationships. I don’t know that it will make anyone who is pro-capital punishment change their minds, but it simply presents the consequences of taking human life in a straightforward manner.

The film is necessarily minimalistic since Rousolof is forbidden from making films; it had to be shot on the sly and what technical post-production additions (such as a score) were kept to a bare minimum. Rousolof is an engaging storyteller who gets across his points in ways that often are breathtaking, particularly in the first and last chapters. He does have a tendency to rely on blindsiding his audience which might seem a cheap tactic, but it works very well in this case.

He also draws characters that are realistic and casts non-professionals (mainly) who inhabit these parts well. I don’t think that I’ve felt as strong an emotional reaction to any film I’ve seen so far this year; it is destined to be a movie that will end up on a lot of year’s best lists, not to mentioin may end up as a powerful, influential movie that will carry echoes beyond its Iranian origins. This is for any lover of cinema, a must-see.

REASONS TO SEE: Captures ordinary life in powerful ways. Explores the morality of capital punishment from a variety of points of view. Compelling characters and performances. Keeps the score to a minimum. Some really shocking moments.
REASONS TO AVOID: May be a bit long for the attention-challenged.
FAMILY VALUES: There are some adult themes as well as a few disturbing images.
TRIVIAL PURSUIT: While it won the Silver Bear at last year’s Berlinale (the highest honor at the Berlin Film Festival), it is banned in Iran for what is perceived to be anti-government sentiment.
BEYOND THE THEATER: Virtual Cinema
CRITICAL MASS: As of 5/23/21: Rotten Tomatoes: 100% positive reviews; Metacritic: 83/100.
COMPARISON SHOPPING: Dog Sweat
FINAL RATING: 10/10
NEXT: Without Remorse 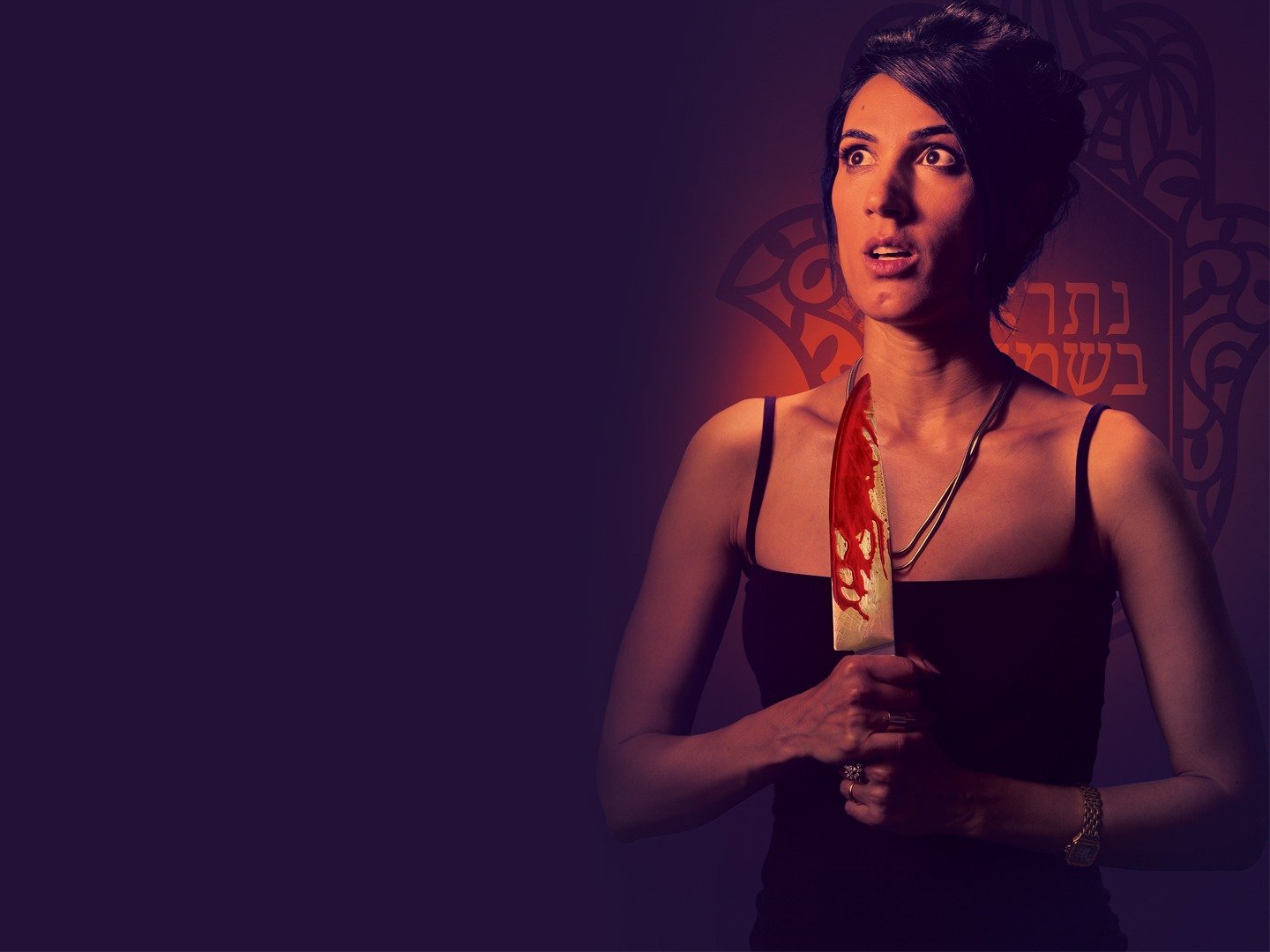 Dinner parties can be SOOO stressful…

What could be more civilized than a gathering of friends and family for a dinner party? Breaking bread with those we care about is one of the nicer parts of being human, something many of us have been missing during the pandemic. However, one look at this dinner party and we might want to embrace social distancing to a much more restrictive degree.

Boorish businessman Yossi (Mohr) and his elegant trophy wife Sigal (Chamami) are Israeli ex-pats living in Southern California. They host a post-Sabbath dinner at their McMansion in the Hollywood Hills, sending the kids away with a heartfelt “Good riddance!” (now, there’s my kind of mom) giving the adults room to party.

Attending the party is Yossi’s business partner, contractor Ilan (Adler) and his girlfriend Noya (Atlas), business executive Avner (Pdut) and his wife Hila (Bahr) who gave up a law career to start a family, and cousin Maor (Lavid) who came stag. Aspiring  actor Michael (Aloni) – Sigal’s beloved cousin who is essentially maligned by the rest of the group – arrives  last with his African-American girlfriend Aliyah (Celma).

Soon, long-simmering resentments begin to leak to the surface and despite Sigal’s best efforts to keep everything sociable, the addition of  black sheep Michael who seems hell-bent on irritating absolutely everybody brings things to a boiling point. Buttons are pushed. Punches are thrown. People are knocked out. Dick pics are taken. Panties are stolen. Accusations are hurled. Bullets fly. Cops arrive. Cops leave. Things get much, much worse.

There is a ghoulish pleasure in watching a dinner party of snobby, shallow rich people turn into a Tarantino climax and you can almost feel Mayer’s glee at staging it. None of the characters onscreen (with the possible exceptions of Aliyah and the rabbi (Burstyn) who shows up in the third act) have any redeeming qualities at all. None of the relationships here seem to be healthy in any way, shape or form except for maybe Sigal and Michael in which there seems to be at least some genuine affection.

There’s a lot of dark humor here, with writers Guy Ayal and Mayer injecting commentary on the shallow nature of Hollywood elites as well as the macho posturing of Israeli men. Even Israeli women don’t go unscathed as the Israeli women here are largely pretty nasty pieces of work with plenty of repressed fury.

There is plenty of blood and carnage, although the murders aren’t particularly inventive. Then again, most of them are crimes of opportunity and passion. Someone gets pushed to the breaking point and grabs whatever is at hand, be it a heavy blunt object or an antique crossbow. Someone even gets stuffed into a kiln.

The mostly-Israeli actors are extremely strong here, with Chamami and Aloni getting the lions share of the moments to remember. However, Pdut has his own share of moments as the businessman hiding PTSD from his time in the compulsory Israeli military service. The movie, though, falls in between niches; it’s not really the kind of horror film that is going to invite raves in the horror film community, and it is a little bit too genre for the arthouse crowd. It also forces the audience to sit through about 45 minutes of a dinner party of unpleasant people before getting to the good stuff, which may try the patience of many. Still, the last half of the movie does move at a pretty good clip, so those who like their mayhem with a side of Jewish gestalt will get their money’s worth here.

REASONS TO SEE: Skewers both shallow Hollywood culture and macho Israeli ethos. A stellar dark comedy.
REASONS TO AVOID: Takes a very long time to get going.
FAMILY VALUES: There is all sorts of violence, gore and mayhem, plenty of profanity, some sexual situations and drug use.
TRIVIAL PURSUIT: “Melder.“ from the HAM radio handle that Eva uses, is German for “reports.”
BEYOND THE THEATERS: Amazon, AppleTV, Google Play, Vimeo, YouTube
CRITICAL MASS: As of 2/24/21: Rotten Tomatoes: 71% positive reviews, Metacritic: No score yet.
COMPARISON SHOPPING: The Perfect Host
FINAL RATING: 7/10
NEXT: Bliss