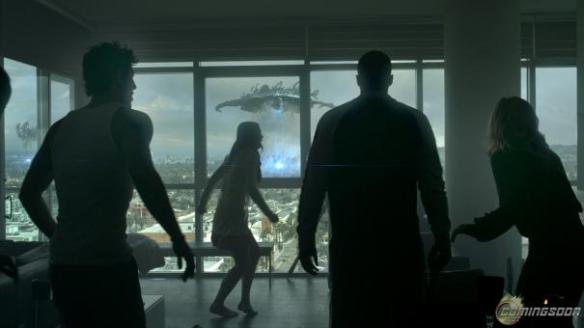 The great thing about this apartment is the view.

The legendary DJ Casey Kasem used to sign off with the same line – “keep your feet on the ground and keep reaching for the stars.” Little did he know that someday, something would reach back.

Jarrod (Balfour) and his girlfriend Elaine (Thompson) fly from New York to Los Angeles to visit Terry (Faison), Jarrod’s childhood friend, on the occasion of his birthday. Terry has made good as a Hollywood producer and has a sick penthouse in a Marina Del Rey high-rise from which he views his kingdom.

Elaine reveals to Jarrod that she’s pregnant, which might be a good thing except Terry’s just offered Jarrod a job that would of course require him to move from the East Coast to the West. Elaine is none too happy about this development because apparently success would be a downer. In any case, they go ahead and party with Terry’s friends, including his bitchy girlfriend Candice (Daniel), his lovesick assistant Denise (Reed) and his overbearing buddy Ray (Hopkins). The party gets a bit boisterous, causing security guard Oliver (Zayas) to knock on the door where he gets a belly full of bitchy attitude courtesy of Candice.

Later that night, they are awakened by an earthquake and bright lights outside the building. People who stare at these lights become mesmerized and feel compelled to walk into the light where they’re levitated off of the surface of the Earth. We know this because it happens to Ray and almost happens to Jarrod who is pulled out of the light at the last moment by Terry but not before Jarrod got all vein-y and crap.

After that, all Hell breaks loose. The lights go away briefly, only to reappear, this time accompanied by gigantic alien space vessels bristling with appendages and looking very bug-like. Jarrod and Terry go to the roof to get a better look which turns out to be a really bad idea since Jarrod manages to lock the door behind them and only timely intervention from Elaine gets them safely off after the big alien space vessels disgorge thousands of little probe vessels that look like those tentacle things in The Matrix and are quite adept at sucking individual people off of roofs and, as we later find out, out of windows as well.

Terry thinks their best bet is to get out of Dodge, preferably by boat since none of the alien vessels are over water. They get into their expensive cars and prepare to drive to the nearby Marina when they are literally stomped on by a giant alien bio-mechanical beastie. Wonder how they’re going to explain that one to the insurance company. They decide to make a run for it back to the penthouse, joined by security guard Oliver who saves them at the last moment from an alien beastie who is slightly smaller than the last one. You’ve seen one alien beastie, you’ve seen them all.

Up to this point, it’s been a pretty good movie. The alien beasties are well designed, the effects shots realistic and while there were a few glitches, the story was moving along at a pretty good clip. Unfortunately, the writers wrote themselves into a corner; much of the rest of the film involves the lot of them sitting around the apartment with nothing better to do but whine and snipe at one another. In other words, they’re essentially sitting around waiting to get sucked out.

It’s a shame, because quite frankly this was a bit of good filmmaking up until that point. The Strause brothers, who have extensive effects experience, utilized some cutting edge technology to make the movie for a bargain basement $10 million, financing the movie essentially themselves. The good news is that it won’t take very much for them to see a profit. The bad news is that the movie has been getting scathing reviews, both word of mouth and online and may not even make back its production costs.

Much of it has to do with the writing. I am not sure why, but there seems to be this belief in Hollywood that when characters are written for science fiction movies, they either have to be too good to be true or too stupid to be believed. The mostly television cast (who have day jobs on such series as “Dexter,” “Scrubs” and “Haven”) do decent jobs but aren’t given a whole lot to do beyond whine, bitch at one another or have fake blood poured over them.

With an ending that is mind-boggling in its “Really?” factor, Skyline starts off strong and then takes a rapid plunge for rock bottom. While they clearly are setting up a sequel, I can’t imagine anyone who’ll want to see it. Once you’ve wiped out the Earth, what do you do for an encore?

REASONS TO GO: The first half of the film is actually pretty good. The imagery is effective and the aliens are pretty imaginative.

REASONS TO STAY: The second half of the movie jumps the shark. Once they return to the apartment, everything goes sliding downhill like an avalanche, gaining momentum until it hits bottom or the movie ends, depending on your point of view.

FAMILY VALUES: There’s a whole lot of violence, a great deal of gore, some disturbing images and more than its share of goo. In addition, the language is pretty foul and there is a bit of sexuality involved here. This isn’t for the little ones in any way shape or form and a lot of the big ones shouldn’t see it either.

HOME OR THEATER: The alien vessels look better on the big screen, with the sound effects sounding better on a big theater system.