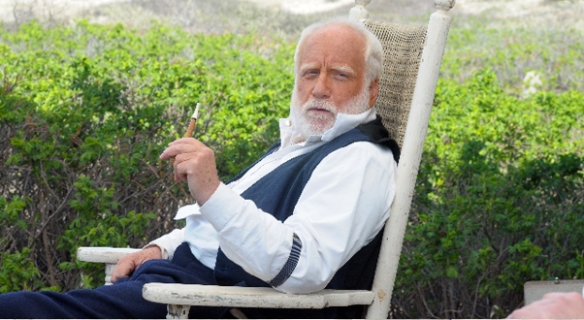 When romance turns to heartache often enough, men sometimes are known to swear off of women. This is all well and good but mostly is an empty gesture; we need love at least as much as we need food and air. To deny any of the three is to kill the body and the soul.

And yet cantankerous old sea captain Seth Atkins (R. Dreyfuss) has done just that. He has retired from the sea and taken up being the lighthouse keeper near Provincetown, Massachusetts. He is getting on in years however and this being 1912 is in need of an assistant to help him run the lighthouse, which is still very necessary to help ships who are not yet relying on satellite navigation.

His deliverance is literally washed ashore into his lap in the form of John Brown (Wisdom), a young British subject who claims he fell off a tramp steamer. He is not particularly forthcoming about his past but seems eager to get away from the fairer sex; this looks like  perfect match for Seth who is precisely looking for a man who won’t be “sparkin’ on the premises” consarn it! And yes, this is pretty much how the characters (especially Seth) talk.

Their bachelor’s paradise is shattered when two women move into the adjoining cottage for the summer. Ruth (Gummer) is an heiress, chaperoned by Emaline Bascom (Danner), who has more to her than she seems. Of course at first the boy’s club is outright hostile to their new neighbors. But as you can imagine soon they are sneaking behind each other’s backs, Seth to see Emaline, John to see Ruth. And when the two boys find out that their roommates have been cheating on their agreement, sparks are going to fly.

Adams does a good job of creating the turn of the last century Cape Cod environment. He also does a good job of creating a story that’s not going to be offensive to anybody. The trouble is that there isn’t enough friction to really hold your interest. The story – which is kind of predictable to begin with – moves along at a majestic pace and I don’t mean royal. It’s slow. It’s ponderous. And while that’s not always a bad thing, it doesn’t give you the payoff here that makes it worth waiting for; the ending simply can be seen coming a good nautical mile away.

Dreyfuss has been one of my favorite actors since Jaws. I’ve always appreciated his work, even when he was in a turkey. This isn’t the worst movie he’s ever appeared in but it is far from the best; nevertheless he elevates it with his leonine performance. Danner, who has always been able to convey grace and class, ups that exponentially here. Her Emaline is a bit of a firecracker but never loses her inner elegance.

There are times when the scenes look a bit awkwardly staged, as if setting up for an avant garde stage play rather than a period family-oriented film. Despite the lush settings and the beautiful period costumes, the actors often look uncomfortable or directionless. On top of that the pacing is so slow and the story so predictable that left to its own devices the film would be a complete yawner. The presence of Dreyfuss and Danner alone give it a marginal reason to see it.

WHY RENT THIS: Inoffensive and wholesome. Dreyfuss and Danner are welcome additions to any cast.

FAMILY VALUES: There are a few mildly bad words and some of the themes might be a bit much for youngsters.

TRIVIAL PURSUIT: Ben Dreyfuss is Richard’s son by his first wife Jeramie Rain; Gummer is the daughter of Meryl Streep.