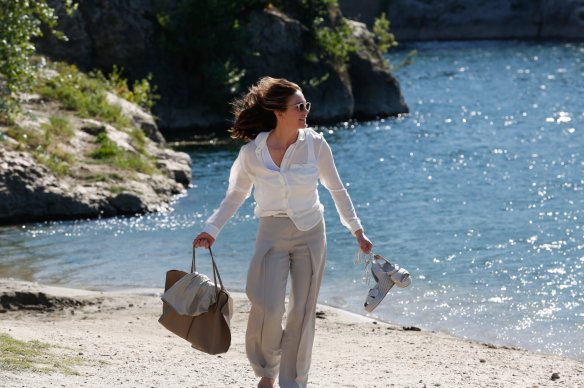 Diane Lane by the river.

Sometimes when one is feeling like life isn’t working out, a road trip is just what’s needed to clear out the doldrums. Of course when that road trip takes you through the south of France so much the better.

Anne (Lane) is the wife of Michael (Baldwin), a high-powered Hollywood producer. They are in Cannes for the film festival and she has developed a nagging earache. Fresh off of plugging his last project to distributors and, well, whatever it is that producers do in Cannes, Michael is headed for Budapest and bringing Anne along in the private jet. The pilot however recommends that Anne not fly given that the earache would make it excruciatingly painful. Michael’s French partner Jacques (Viard) offers to drive Anne to Paris rather than having her take the train by herself. She cheerfully agrees.

Jacques is not one to take the direct route; he must stop hourly for smoke breaks and to fill the radiator in his classic Peugeot Cabriolet. He also must stop to show her the Best Roman aqueduct, the best little bistro in Provence, the best inn in Burgundy, the best Museum of Cinema in Lyon (which, to be fair, was where the Lumiére brothers were based) and so on and so forth.

Jacques is also a bit of an epicure, and every meal becomes an event. For Anne who has been somewhat sheltered in her enjoyment of life, this is a bit of a revelation. She wouldn’t characterize her marriage as bad exactly, but she is at a critical time in her life. Her daughter is off at college and has elected to spend Christmas break with her friends. Her husband essentially ignores her and her career as a dress shop owner has been given up. She is lost in her own life.

Jacques is also a bit of a lost soul. Single at an age when most men are enjoying their grandchildren, he seems to know everyone but how well they know him is another story. He is flirtatious and there is maybe a bit of a spark between the two of them – Jacques knows the way to her heart is through chocolate – but where that spark might take them before they arrive at Paris days after they were supposed to arrive there is uncertain.

Coppola, the wife of director Francis Ford Coppola, has a keen understanding of the rhythms of life in the south of France. The movie unfolds at an unhurried pace which some critics found infuriating oddly enough, since most European films are similarly paced. With picnics set at the side of bucolic rivers and amazing meals in quaint bistros and fine dining establishments, one shouldn’t watch this movie while hungry.

Lane is an actress who has always spoken to me. Even in her mid-50s, she remains as sexy as she has ever been, albeit in a less obvious manner than what many starlets exude. Lately she seems to be cast most often as the forgotten wife and it seems difficult to understand why any husband would ignore her; she’s smart, funny and did I mention she’s sexy as all get out? In any case, she excels at playing women in the process of rediscovering themselves and that is what this particular movie is all about.

Viard, a well-known actor/director in France, underplays this maybe a bit too much. He’s charming sure but the role needed someone a bit more rogue-ish. The romantic sparks between Jacques and Anne are tepid at best and even though the ending, which has Lane winking at the camera, promises something more, it’s hard to believe that Anne would send Michael packing that way. One gets the sense that Anne is the type of woman who would end her marriage before she’d consider taking on a romantic partner. Of course, we could be talking road trip buddies here; that aspect is left for the viewer to decide.

I will say that the movie does meander quite a bit particularly in the middle. Coppola, who also wrote the film, doesn’t seem to have a firm destination in mind or at least if she does no clear way to get there. We end up with a lot of conversation that tries to be revelatory but doesn’t really tell us anything about the characters. If you’ve ever tried to have a deep, meaningful personal conversation with a person who doesn’t want to tell you anything about themselves, you’ll understand how frustrating the movie can be.

REASONS TO GO: Who wouldn’t want to take a trip like this one? Diane Lane is still as sexy as hell.
REASONS TO STAY: The film drags a bit in places.
FAMILY VALUES: There are some adult themes, Jacques smokes like a chimney and some mild profanity in certain places.
TRIVIAL PURSUIT: Coppola was 80 years old when she made this, her narrative feature debut (she released a documentary feature more than 25 years ago). She is not the oldest person to direct their first narrative feature – Takeo Kimura directed his first narrative feature Dreaming Awake at age 90 in 2008.
CRITICAL MASS: As of 6/5/17: Rotten Tomatoes: 57% positive reviews. Metacritic: 48/100.
COMPARISON SHOPPING: The Trip to Italy
FINAL RATING: 7/10
NEXT: Deidra and Laney Rob a Train