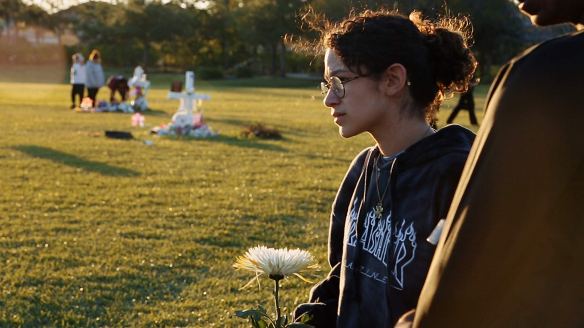 This is what grief looks like. as Victoria Gonzalez remembers her boyfriend Joaquin Oliver.

The massacre at Marjorie Stoneman Douglas High School in Parkland, Florida on Valentine’s Day, 2018 has had a kind of staying power in the imagination. 17 students died that day, and 50 more were injured. Nearly every student and family of those students were affected in a real way by the crime.

While other school shootings have come and gone in the national consciousness – when did we become so blasé about them that they have become just another news story? – Parkland has lingered in the public eye, largely because the students, rather than grieving privately, decided to become activists to create sensible gun laws. They have taken on the NRA and the Republican Party and while they have made some slight inroads, their goals of banning military-style semi-automatic rifles like the AR-15 have yet to materialize.

But even that isn’t necessarily what After Parkland is about. The movie which began as a Nightline assignment, is about how the survivors went about rebuilding their lives and carrying on as best they could. Senior David Hogg became one of the faces of the Parkland shooting for his outspoken criticism of the federal government for failing to act and helped create a foundation that organized events like March For Our Lives which many readers may have participated in. However, the film is more intimate, choosing to assume that we all understand the politics. We see how the shootings affected his younger sister Lauren, who lost four friends in the gunfire. We see his mother gruffly fending off the news media as David walks in from the parking lot to the first day of school two weeks after the shooting.

Much of the film revolves around Joaquin Oliver, a 17-year-old who was one of those who didn’t survive. We see his father Manuel, who fled the political turmoil of Venezuela only to lose his son to senseless violence in America, continuing to coach Joaquin’s basketball team in honor of his son’s memory. We see Joaquin’s best friend Dillon McCooty, who tries carrying on, wearing his uniform number in his memory and taking it upon himself to will his team to a championship. We also see his girlfriend Victoria Gonzalez hide her devastation; “I’m good at putting up a front,” she remarks offhandedly as people remark on how well she’s handling it. In a particularly touching sequence, McCooty takes her to the prom, trying to make it as special as possible for her. We get to know Joaquin through home movies and the testimony of his friends better than any of the victims.

We also meet Andrew Pollack, father of Meadow who also died in the tragedy. He testifies before such figures as President Trump and Education Secretary DeVos, Pollack’s rage at the government’s failure to protect his daughter in a school setting barely contained. He tells us that he used to have a great life, but now he can’t smile anymore. He almost dares the filmmakers to ask him anything; “If I can take the death of my daughter, I can take anything.” He sets out to build a park playground in his daughter’s honor. He also sidesteps politics, saying firmly but politely that school safety and not gun control is his central issue.

Some might disagree with his focus, but it’s really hard to given what he has lost. Filmmakers Taguchi and Lefferman admirably remain in the background, generally just following their subjects around or letting them vent to the camera. While the activism is certainly a part of the story – it feels to a large extent that it is a coping mechanism for some – this is a movie about people, not politics. This will likely elicit a few tears and much sympathy and even some empathy. I know that some of us try to avoid anything that reminds us of these sorts of tragedies which have continued to occur in the wake of Parkland. I can certainly understand wanting to turn away, but a part of me thinks that maybe we should face it and wallow in it. Maybe if the outrage reaches a sufficient level, change will be forced to occur. If that could happen, maybe the 17 lives snuffed out almost before they started might not have been lost in vain.

REASONS TO SEE: Raw and very powerful. Shows the immediate aftermath of the shooting and how it affected those who lost friends and family. Uses the survivor’s own words to tell the story.
REASONS TO AVOID: May be a trigger for those who have been affected by a school shooting.
FAMILY VALUES: There is some profanity, adult issues dealing with grief and some disturbing images.
TRIVIAL PURSUIT: More than 100 venues around the country, including the Enzian here in Orlando, are taking part in a one-night only special screening of the film. Various organizations will be participating, hoping to start a dialogue that will lead to meaningful change –  there will also be voter registration being conducted. For those who can’t make these special screenings, the movie will be available for streaming on Hulu starting February 19th, and on DVD and Blu-Ray from Kino-Lorber on February 25th.
CRITICAL MASS: As of 2/11/20: Rotten Tomatoes: 100% positive reviews: Metacritic: 72/100
COMPARISON SHOPPING: Song of Parkland
FINAL RATING: 8.5/10
NEXT: Suspiria (2018)