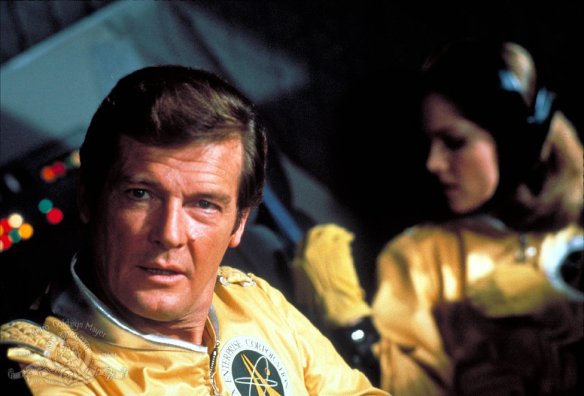 In space, nobody can hear your witticisms.

Among James Bond fans, Moonraker remains even today a divisive subject. Some hail it as being among the best of the entire franchise (New York Times critic Vincent Canby thought it was even better than Goldfinger) while others look upon it as campy schlock with little redeeming value.

The plot is pure balderdash. A space shuttle, on loan to Britain from the U.S., is hijacked from a 747 on the way back to America. James Bond (Moore), MI-6 agent 007 is assigned the case by M (Lee, his last appearance in the franchise) and is sent to interview Hugo Drax (Lonsdale), the billionaire owner of Drax Industries who manufactured the shuttle. While on the French estate which the industrialist had moved stone by stone to the California desert, Bond meets Dr. Holly Goodhead (Chiles), an astronaut assigned to Drax and is nearly murdered by Chang (Suga), Drax’ bodyguard. With the assistance of Corinne Dufour (Cléry), Drax’ personal pilot, Bond discovers some blueprints to an unusual glass container.

Bond goes to Venice to find out the secret of the container and discovers that it is a vessel for a highly toxic nerve gas, accidentally killing several lab technicians in the process. Chang, however, he kills on purpose. He calls in the cavalry only to find the entire operation has disappeared. However, Bond kept a vial of the gas as proof and M keeps Bond on the case despite calls to take him off it. Under the guise of sending Bond on holiday, M sends him to Rio de Janeiro where Bond has discovered that Drax has moved his operations. There, with helpful contact Manuela (Bolton) he eventually learns that Drax has a secret base near Iguazu Falls on the Amazon.

Drax also has a new bodyguard, by the name of Jaws (Kiel) and a plan – to render Earth uninhabitable by humankind (the gas is harmless to animals and plants) and take the most beautiful specimens of humans onto a space station orbiting the Earth, kept hidden by a massive radar jamming device. Bond and Goodhead, who  turns out to be an ally, must stop Drax from wiping out all of humanity and beginning a new master race, one which he and his descendants will rule.

As Bond movies go this one is pretty ambitious. It had for its time an eyebrow-raising budget. In fact, For Your Eyes Only was supposed to follow The Spy Who Loved Me but as Star Wars had rendered the moviegoing public sci-fi crazy, producer Albert Broccoli decided to capitalize on the craze and send Bond into space. Utilizing series regular Derek Meddings on special effects (for which he was nominated for an Oscar) and Ken Adam for set design, this became one of the more visually spectacular of the Bond films, right up there with the volcano lair of You Only Live Twice.

Moore as Bond relied on witticisms more than Sean Connery ever did; here he approaches self-parody. By this time he was beginning to show his age (he was older than Connery was when he made Never Say Never Again) and becoming less believable in the role, although he would go on to make three more Bond films. This wasn’t his finest moment as Bond but he continued to make it through on charm and comic timing.

His main Bond mate, Chiles, was decidedly less successful. Many consider her the coldest Bond girl ever; she is decidedly unconvincing as a scientist and less so as a spy. She has almost no chemistry with Moore; Carole Bouquet would turn out to be a much better fit for Moore in For Your Eyes Only which wisely brought Bond back to basics when it came out in 1981.

Kiel, as Jaws, was already one of the most popular Bond villains of all time. Rather than being menacing, he became almost comic relief; his indestructibility becomes a running joke which might have been a tactical mistake by the writers. The movie desperately needed a sense of peril to Bond and you never get a sense he’s in any real danger other than a single sequence when Chang attempts to murder him in a G-force testing machine. Nonetheless Kiel is game and is one of the better elements in the film.

By this point in the series Bond films essentially wrote themselves and had become a little bit formulaic. Despite the popularity of this film, Broccoli knew that he had to break the franchise out of its rut and he would do so with the following film which would become one of the best of the Moore era; this one, while some loved it and audiences flocked to it, remains less highly thought of today. It is still impressive for its space battle sequence, it’s amazing sets and zero gravity sequences, even despite being somewhat dated. It, like nearly every Bond film, is solid entertainment by any scale.

WHY RENT THIS: Special effects were nifty for their time. Moore remains the most witty of the Bonds. Jaws.
WHY RENT SOMETHING ELSE: Chilly Chiles. Lacks any sense of peril. Occasionally dull.
FAMILY VALUES: Violence and some sexual innuendo
TRIVIAL PURSUIT: Would be the highest-grossing film of the series until Goldeneye broke the record in 1995.
NOTABLE HOME VIDEO EXTRAS: The Special Edition DVD includes a still gallery and a featurette on the Oscar-nominated special effects. The Blu-Ray edition includes these as well as some storyboards and test footage.
BOX OFFICE PERFORMANCE: $210.3M on a $34M production budget.
SITES TO SEE: Netflix (Blu-Ray/DVD Rental only), Amazon, iTunes, Vudu (download only)
COMPARISON SHOPPING: Austin Powers: International Man of Mystery
FINAL RATING: 6/10
NEXT: Sci-Fi Spectacle continues!