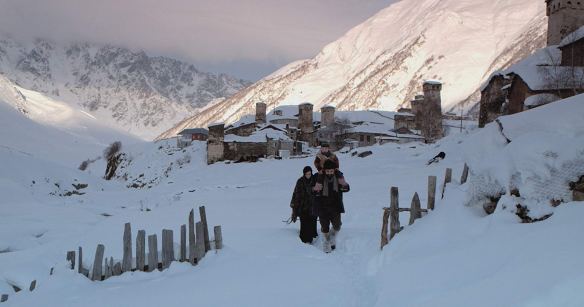 The ageless Caucasus mountains dwarf the individuals who live there.

The Caucasus Mountains stand brooding in the former Soviet republic of Georgia, imposing and timeless. In the region of Svaneti, tradition is the backbone of life but that tradition but it is a region that is slowly fading into history. They have their own language but it is officially listed as a dying language (you can hear it spoken here). Director Mariam Khatchvani knows the region well – she grew up there.

Following the Georgian civil war of 1992, the remote village of Ushguli welcomes back their favorite son David (N. Khatchvani) who brings with him Gegi (Babluani) who saved David’s life in the war. Both of them have something to return to; David a fiancée and Gegi a mysterious woman whose name he does not know but whom he feels a special connection and, he’s sure, feels one with him. Little do they know that they are both after the same woman – Dina (Vibliani).

For Dina’s part, she has no love for David whatsoever – the marriage was arranged for her by her tradition-bound grandfather – but as much as she wants to break off the marriage, nobody else particularly wants to. Both families would lose face (particularly that of David) and the situation would undoubtedly lead to a blood feud between the two families. However fate intervenes and sends Dina on a journey in which she will attempt to exert her own independence, face tragedy, become the mother to a son and become the object of desire for three different men.

This made some waves on the European festival circuit and for good reason. Mariam Khatchvani, making her feature film debut, has crafted a beautiful movie of magnificent vistas and strong emotions, giving us a peek into a little-known culture and commenting on the patriarchal nature of her native land. That’s an awful lot to expect from a first film but she makes it work deftly and gracefully.

Some critics have compared this to A Handmaid’s Tale and while this isn’t quite as dystopian, there are certainly some revealing moments in regards to the attitudes towards women, often from other women. Traditions are strong in that part of the world and they govern nearly everything when it comes to love and relationships. Women “have no say,” as one patriarch grumbles, in whom she marries (even today, 25 years after this was set, women still cannot inherit from their husbands). It is permissible for a family to kidnap a woman off the street and take her to their home – and yes, that means they’re married. Once a man declares his intent to marry a woman, there’s no response from the woman necessary – they are betrothed whether she likes it or not. Generally though these things are arranged between the eldest males in the families..

While the traditions may seem backwards and even primitive to American sensibilities, they are very much a part of that part of the world. Life is hard, particularly during the harsh winters in the mountains and there are not a lot of modern conveniences. Most of the actors are non-professional locals and while Vibliani stands out as the best of the bunch, Babluani – the lone other professional – acquits himself well also. Vibliani has an angelic face and projects the fierce inner strength of Dina. Her beauty is both a curse and a gift in the mountain village as Dina goes through life as a prized possession, but a possession regardless. She is considered chattel like all women of the region and it is sobering to think that it has only been a bit over a century since we held the same attitudes in the West.

The cinematography is absolutely stunning with the mountains rendered as a silent Greek chorus to the events here. There is also plenty of singing and the singing is breathtaking and beautiful. Svaneti may as well be on another planet in many ways, but this movie helps us reflect that the attitudes toward women even in supposedly enlightened cultures are not that far removed from utter misogyny and domestic slavery. Given how women continue to be treated here in the west, there is nearly as long a way to go here as there is in Ushguli.

REASONS TO GO: The scenery and music is absolutely stunning. The film illustrates the hardship of life in that part of Georgia. Vibliani is beautiful and spirited.
REASONS TO STAY: The movie is a tiny bit too long.
FAMILY VALUES: There are some adult themes.
TRIVIAL PURSUIT: The movie is a Khatchvani family affair as the director cast her husband and son.
BEYOND THE THEATERS: Amazon
CRITICAL MASS: As of 12/29/18: Rotten Tomatoes: No score yet: Metacritic: No score yet.
COMPARISON SHOPPING: A Suitable Girl
FINAL RATING: 8.5/10
NEXT: Christmas Blood