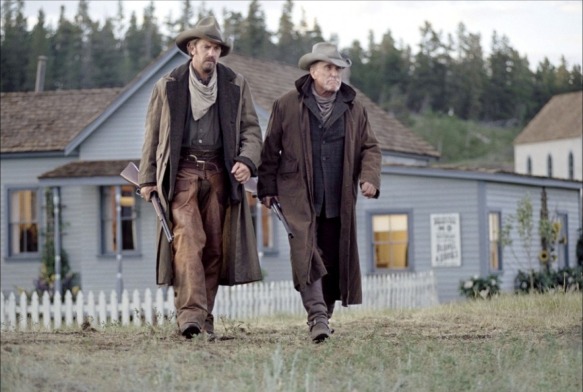 Kevin Costner and Robert Duvall are home on the range.

Kevin Costner returns to the American West, a setting which has seen his greatest triumph to date in Dances With Wolves. Like that Oscar-winning classic, Costner directs as well as stars and once again proves effective in both roles.

Charlie Waite (Costner) is a former gunslinger who earns his keep these days as a free-grazing cattleman, along with his partner, Boss Spearman (Duvall). They are grazing their cattle on what appears to be an uninhabited meadow near a town; one of their hands, an easy-going doofus named Mose (Benrubi) gets into a fight in town and eventually has to be brought back to the range by his employers. The cattle baron who runs the town, Denton (Gambon) can’t abide the thought of free grazers in his territory, and he orders his thugs to take them out, while the law turns a blind eye.

Mose is killed, and Button (Luna), a young man that the partners have essentially raised, is gravely wounded. Of course, Waite and Spearman can’t just let this go by, and they return to town, aided by a comely physician (Benning), to take justice as best they can.

This blends the best of modern Westerns, including the easygoing relationship between Waite and Spearman, which is straight out of Lonesome Dove (it’s no accident that Duvall starred in both), as well as the division between town and prairie, with the town representing corruption and violence as opposed to the freedom of the range. This is a theme that recurs in Clint Eastwood’s best movies, especially The Unforgiven and Pale Rider.

Costner is a better director than he is often given credit for; he has had his share of bombs (Waterworld, The Postman) but he knows when to show us a pretty picture and when to show us an ugly one. He juxtaposes the openness of the West with the confines of the town, and makes the hard, relentless life of a free grazer almost desirable. He is also appealing as the lead here, and that is what makes Open Range so good. Charlie Waite is a wounded soul, suffering from the demons of his own guilt seeking to forget his past in the vastness that was the West. Boss, his truest friend, is a rascal, yes, but a fair one. The two have a compelling chemistry.

Costner as an actor has an affinity for Westerns. He gets the rhythms and the flow of them. Now, he doesn’t necessarily sound like someone from the Old West in the sense that he uses the same style of speechifyin’ but I’m talking about Westerns. He has the laconic delivery of a Gary Cooper with the innate honesty of a John Wayne and the rugged chiseled good looks of a young Eastwood. Costner captures the essence of a Western hero and by extension, of American men in general. We all aspire to those values that made Westerns the king of movies during an era when arguably America was at its most prosperous. We also yearn for a simpler time when life was hard but our prospects were unlimited. The West meant freedom and a man could make a fresh start out there, get a second chance in some cases. It is the most American of aspirations.

The gunfights are often at the center of traditional Western, and there is a mighty good one here. You should be warned that the gun battle is extremely loud; those who are sensitive that way may want to think twice before seeing this in a state-of-the-art home theater with Dolby sound and all the bells and whistles. Otherwise, this is a sprawling, wide-open movie with a terrific human story at its heart, aided and abetted by some fine performances in the lead roles. Even those who are not particularly fond of Westerns, such as my spouse, Da Queen, will give this a rousing thumbs up as she did.

WHY RENT THIS: A throwback to classic Westerns. Costner is at his finest. A human story on an epic scale.

WHY RENT SOMETHING ELSE: Overly loud in places. Cliche in other places.

FAMILY MATTERS: Can be loud and violent.

TRIVIAL PURSUITS: Tig is not only the name of the dog in the movie but also the name of Costner’s production company. It’s taken from his grandmother’s nickname.

NOTABLE HOME VIDEO FEATURES: There’s a 12 minute documentary about the history of the open range and free-grazing as well as a music video. It should be noted that the making-of featurette is unusually candid, dealing with the problems the film had obtaining financing (Costner and producers Jake Eberts and David Valdes put up about half of the budget from their own money) which weighed heavily on Costner during filming when there were no distributors lined up. Near the end of production, Costner was also working through severe abdominal pain which turned out to be appendicitis.

BOX OFFICE PERFORMANCE: $68.3m on a $22M production budget; the movie was a hit.