Ashton Kutcher doesn’t quite believe Cameron Diaz got a bigger paycheck than he did.

Some slogans are associated with cities pretty much forever. Chicago will always be my kind of town. You will always love New York. And what happens in Vegas…well, you know the rest.

Jack Fuller (Kutcher) has been fired from his job. What hurts the most is that it’s his dad who fired him. Jack is one of those young 20-somethings who is still trying to find himself but doesn’t mind taking his time about it. He’s not boyfriend material by any means. To help him get through his blues, his best friend Hater (Corddry), the most aptly named lawyer in history, decides to take him to Vegas.

Joy McNally (Diaz) is an ambitious floor trader on the New York Mercantile Exchange. She is engaged to Mason (Sudeikis) and has her perfect life already lined up ahead of them. Unfortunately, Mason isn’t quite on board – he dumps her in front of the door to their apartment, not realizing that Joy has invited all of their friends over for a surprise birthday party for him. Awk-ward! Her acerbic best friend Tipper (Bell), who longs to loosen the stick that has been up her tush for some time, decides to help her get over her depression by taking her to Sin City.

As always happens in Vegas – all right it never does but we’ll humor the writers – the two are booked into the same room. Instead of getting another room they decide to share and drown their sorrows in alcohol and baby, there’s plenty of alcohol in Vegas. Jack and Joy get themselves good and sloshed and wake up with rings on their fingers – the wedding kind.

As sobriety sets in the morning after, they make plans to get an annulment and head down to the brunch buffet to show there are no hard feelings. Joy even lends Jack a quarter to put in a slot machine. But when the machine pays out three million dollars, all bets are off.

And so is the annulment. Jack and Joy want it all – the money and the freedom. A fed-up Judge (Miller) tells them that he is freezing the winnings for six months while the couple makes a real effort with a marriage counselor (Latifah) guiding them. Joy moves into Jack’s apartment and of course both of them do the best they can to make the other want to give up the cash and get out. Hilarity technically ensues.

If this sounds like a plot you’ve heard before, you pretty much have. Typical of romantic comedies, it’s “I hate you I hate you no I love you” and there is nothing here that is going to catch any regular moviegoer off-guard. Well, maybe the chemistry between Kutcher and Diaz – two actors who have never really floated my boat much. Diaz can be a gifted comic actress (see There’s Something About Mary and The Mask) and Kutcher is more of a gut actor, but they make sparks pretty nicely together. They are actually better together than they are separately, although lots of critics disagree with me on that one.

It’s actually the second bananas who are the most fun to watch. Corddry has always been an underrated actor who when he gets a great role as in Hot Tub Time Machine can be absolutely scene-stealing. Lake Bell, who I think finally showed how great she can be in this year’s In a World showed glimmers of that talent here in a very different role.

The comedy here is mostly of the physical kind and the jokes are a bit tired and there are more groaners than not. Those who love lowbrow humor will be in hog heaven – there’s plenty of it here. It’s raunchy in places but not overly so, at least not like the Apatow comedies have set the standard for. As romantic comedies go this is pretty middle of the road and makes for decent entertainment for those moments when you want a few laughs but don’t want to put too much effort into the plot.

WHY RENT THIS: Nice chemistry with Kutcher and Diaz. Corddry and Bell nearly steal the show.

WHY RENT SOMETHING ELSE: Been there done that premise. Too much lowbrow comedy.

FAMILY VALUES:  There’s plenty of sexual innuendo and crude remarks, some foul language and a scene of drug use.

TRIVIAL PURSUIT: The party trick performed by Joy was the same one that Cameron Diaz also performed in Charlie’s Angels: Full Throttle.

NOTABLE HOME VIDEO EXTRAS: There’s a gag reel and a faux commercial for Corddry’s law firm. The Extended Jackpot edition includes an unrated version of the film that is (get this) two minutes longer than the original. Not. Worth. It.

NEXT: So I Married an Ax Murderer 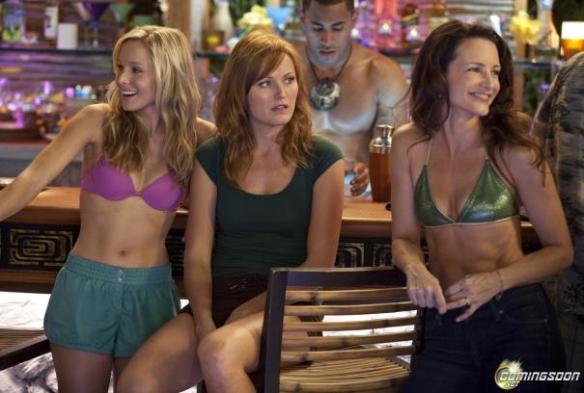 Malin Akerman (center) realizes her love scenes are with Vince Vaughn while her co-stars pretend not to notice her discomfort.

Relationships require a lot of work and even with that, none are ever perfect. Sometimes we have problems with our mates that we didn’t even know we had.

Dave (Vaughn) is a happily married video game salesman (specializing in Guitar Hero) who has a nice suburban Chicago home, two mostly well-behaved kids (although one has a tendency to use just about anything as his personal toilet) a stressful job that demands long hours, and a gorgeous, loving wife (Akerman) named Ronnie who is completely absorbed in remodeling their home. He is less enthusiastic about the project and this has brought some tension to the marriage.

His best buddy is Joey (Favreau), who married Lucy (Davis) just out of high school after he got her pregnant. They show a united front to the world, especially when their daughter Lacey (Walsh) attempts to leave the house in the middle of winter dressed like a hooker, but in reality they can’t stand each other and plan to divorce as soon as Lacey leaves for Stanford. In the meantime, they are cheating on each other as much as they can.

Shane (Love) is already divorced and dating Trudy (Hawk), a much younger model wannabe. He’s going through a big time midlife crisis, but is having some financial troubles after his wife Jennifer (Smith) soaked him in the divorce. He asks his buddy Dave to co-sign on a loan to buy a motorcycle, which Dave refuses at first but eventually gives in when Shane opens up and tells him how much he needs it on a personal level. Dave’s an enabler that way.

The others aren’t so enthusiastic about going, although their interest is piqued when Jason and Cynthia promise them they don’t have to do any of the touchy-feely stuff. Dave’s objection is that he can’t really get away from work and that they couldn’t get anyone to watch the kids anyway, but when his kids beg him to go and even call his dad to babysit, Dave and Cynthia – who had skipped their honeymoon when Dave got a job offer – decided to take advantage of the opportunity.

Once there they fall under the ministrations of the smarmy concierge Sctanley (yes, that’s how he spells it) and the new age guru Marcel (Reno) who is something of a whiz kid at rescuing marriages. Once there, they realize that all the fun stuff is located in the singles side of the island to which they are forbidden to go, and that all of them had to partake of the skill building sessions. As they go through therapy, cracks in the facades of all their relationships begin to appear until it becomes evident that none of them may leave Problem Island with their marriages intact.

Vaughn co-wrote and co-produced this epic with his buddy Favreau, and if you like either one of their onscreen personas in previous movies like Swingers and Wedding Crashers, you’ll want to see this. Vaughn gets most of the great one-liners (the advantage of being your own producer and writer) and he delivers them seamlessly, Vince Vaughn-style.

It seems odd that the three middle aged flabby guys all have super hot wives (Akerman, Bell and Davis all look pretty spectacular in bikinis) and Love, who is a bit of a behemoth, has essentially a 20-year-old supermodel doing the nasty with him in oh-so-nasty ways. However, this is Hollywood and I suppose anything is possible.

The cast is really solid and they all are given characters that give them at least something to latch onto as actors, and they’re all good enough to take advantage of it. It’s too bad the script couldn’t have given them a better story. While the concept is solid, the way they get from beginning to end is pretty weak. I think they would have benefited from a little more realism and maybe the knowledge that not every marriage works out okay should have been introduced. The whole notion of love conquering all is mainly a Hollywood invention and nobody really believes it anymore. While I’m sure studio executives were anxious for everyone to end up happy and in love, the movie would have been better if they hadn’t.

Filmed at the St. Regis resort in Bora Bora, one of the most beautiful places in the world, it’s a great-looking film. The bottom line is whether or not it’s funny. The answer is, yeah for the most part. There are some moments that fall flat, and some of the writing seems a bit forced into making a Hollywood happy ending. The underlying message is that as long as the sex is good, so is the marriage which doesn’t really ring true. Still, there are enough laughs for me to recommend this slightly. It’s not as horrible as other critics are making it out to be; it’s just slightly better than okay. Not a ringing endorsement I know, but the sandal definitely fits.

REASONS TO GO: Jennifer Garner’s best performance to date augments an intriguing premise. The movie has a good deal of heart and has at least one genuinely moving moment.

REASONS TO STAY: The romantic comedy aspect doesn’t work as well as the satire. Too many cameos spoil the broth.

FAMILY VALUES: Some PG sexual situations and one scene in which some self-pleasuring is implied; nothing really overt but you may want to think twice before bringing kids who are less aware of sex.

TRIVIAL PURSUIT: Couples Retreat marks the fourth movie that both Vaughn and Favreau have been in together.

HOME OR THEATER: Although some of the lovely shots of Bora Bora look gorgeous on the big screen, it works as well on the home screen.