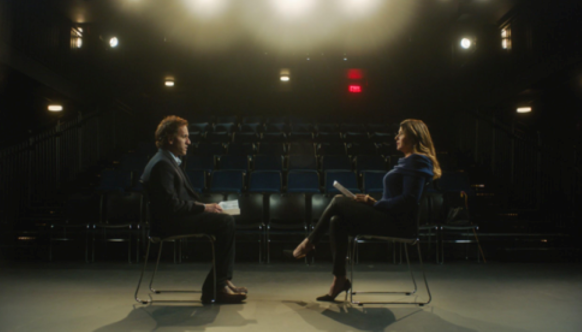 To be a great actor it doesn’t hurt to have a great acting coast and Maggie is one of the best. Thanked by both Meryl Streep and Cate Blanchett in their Oscar acceptance speeches, Maggie has a client list that is strictly A-list, including Brian Dennehy and SNL veteran Kenan Thompson.

When a guy (Jain) comes off the street trying to wheedle a lesson out of her – he has a big audition with Law & Order the next day – she refuses at first but he’s persistent and eventually she agrees to give him a crash course. It is a lesson destined to change them both.

Bonifacio is no stranger to Tribeca, having debuted two well-received shorts there. This one has his best-known cast to date. Getting Bracco was a particular coup; she simply knocks it out of the park. Ever since The Sopranos ended, we really haven’t seen much of her onscreen; that’s a damn shame because she is really a wonderful actress. Jain, best-known for his work in the 2014 film The Quitter holds his own.

Bonifacio, drawing on his own experiences as an acting coach, wrote and produced the film with his wife Julianna Gelinas Bonifacio making this a family affair. The short has a sly sense of humor and an interesting twist at the end, although it isn’t super-revelatory.

I don’t generally review shorts but this one caught my attention with a terrific cast (I’m a big fan of both Dennehy and Bracco) and the cojones to tell veteran actor Dennehy that he needs to be more intense. Of course, when Tony Soprano’s shrink tells you that you need more intensity, then you get more intense, that’s the end of it. The short is currently appearing at the Tribeca Film Festival and is likely to play several more. Keep your eye out for it.

REASONS TO SEE: Bracco gives an intense performance, matched nicely by Jain.
REASONS TO AVOID: The twist is on the mild side.
FAMILY VALUES: The subject matter may be a bit more than little ones can handle.
TRIVIAL PURSUIT: Jain’s character is auditioning for Law & Order; Jain ironically appeared in a role on the Criminal Intent spin-off.
CRITICAL MASS: As of 4/28/19: Rotten Tomatoes: No score yet: Metacritic: No score yet.
COMPARISON SHOPPING: The Tutor
FINAL RATING: 6.5/10
NEXT: Long Day’s Journey Into Night