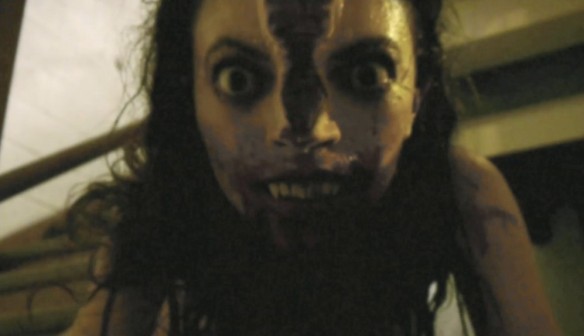 All in all, you might have been better off using Match.com

While technology improves, some things stay the same. We can upgrade our recording systems but the images don’t change much. One vacation video is pretty much the same as another, whether it was taken in 1982 or 2012.

But these are anything but vacation videos unless you have a peculiar idea of relaxation, but let’s start from the beginning. An unknown party hires four small-time criminals who are known for making videos of women that they catch in parking garages and brutally show off their naked breasts. These make tons of money on the Internet, but their mysterious employer isn’t interested in boobs. He wants the gang of four to enter a house that’s more or less deserted (and it turns out to be less), and steal a videotape.

Break in they do and they enter the house to find a dead body and a pile of videotapes. As one of the group checks out the tapes to figure out which one is the right one, the rest of the group goes to investigate a series of mysterious noises – and you know that is going to end badly.

The first tape concerns a trio of frat boy-sorts who attach a spy-cam to one of the lad’s glasses and they go out hoping to get him laid. After some trial and error and enough alcohol to prove that these boys (save the one with the camera) are pretty much assholes when drunk, they manage to pick up a couple of girls. One of them passes out quickly but the other, named Lily, takes a shine to the cameraman (“I like you” she says repeatedly) but apparently one of the frat boys likes her a lot and decides to horn in on the action. Lily doesn’t seem to mind at first but, well, she’s a very special girl.

In the second, a newly married couple visit a southwestern tourist attraction – a wild west ghost town and do some hiking in the mountains. They are followed by a young woman who seems a little creepy, particularly to the husband. He really doesn’t know the half of it as some of the minor annoyances on their trip are her doing. But what are her intentions and why is she doing this?

In the third, a quartet of friends visit the home town of one of them who once they enter the woods around the town begins to act strangely. It turns out that there were some inexplicable murders there a few years earlier and that their friend knows more about the subject than she’s let on. As her creepy pronouncement that they’re all going to die there looks more and more likely, they’ll discover that the killer is still around and a creature like him they’ve never seen – say hello to Glitch Man.

The fourth is mainly the Skype conversation between a doctor and his girlfriend, who is convinced that the house she is in is haunted. He, being a rational sort is skeptical but he begins to see things too. Soon he’s more concerned about her situation than she is – she’s convinced that she can reason with the spirits and send them on their merry merry. But she may have miscalculated their intentions, particularly in relation to the mysterious bump on her arm.

The final tape shows a group of four friends who are invited to a Halloween party at an isolated house on the edge of town. Sounds like fun so the high-spirited boys and off they went to a very nice house in the middle of nowhere. When they get there, nobody’s there even though the house is unlocked and all the lights are on. While they speculate that this might be a Halloween attraction of some sort, however, it’s not the sort of attraction you’d want to spend money on and when the boys make it into the attic, all hell is going to break loose.

Anthologies are a horror film mainstay. It’s an effort to tell shorter stories that might deserve a telling without devoting an entire movie  In this case, each vignette is directed by a young up-and-coming filmmaker in the underground and mainstream horror genres. West is the best known, having directed the sequel to Cabin Fever which actually wasn’t all that bad for a direct-to-video effort and a really fine horror movie from last year called The Innkeepers. The rest are not as familiar to me so I didn’t really know what to expect. And pretty much as you might expect, the efforts here run from really good (the first tape) to not so much (the fourth).

The acting is as you also would expect rather uneven as well, although there are some finds. Hannah Fierman as Lily in the first movie is genuinely creepy. Her transformation from meek party girl to…well, I don’t want to spoil it but trust me it’s pretty spectacular and Hannah has a lot to do with it. If you see her in a bar near you walk on my friend, walk on.

The glitch man in the third vignette is also pretty nifty although the constant noise and jumpiness in the film gets really old really fast. In fact, one of the conceits of the movie is that they are all from videotapes so the quality of the images is pretty weak but that doesn’t mean the cinematography is bad, if that makes sense.

There is a gratuitous amount of gore and bare breasts, so if those things offend you my guess is you wouldn’t be interested in seeing a movie like this anyway. Everyone else, this is a solid and spectacular in places horror anthology that won’t completely win you over (the weak portions can be pretty boring and the movie at a little over two hours is about 20 minutes too long for my taste – a whole vignette could have been eliminated and they would have been much better off. Short of that, it’s available on VOD right now so if it isn’t playing near you, you can still check it out.

REASONS TO GO: Lots of gore and lots of boobs – mainstays for an excellent horror film.

REASONS TO STAY: Some of the vignettes are more successful than others.

FAMILY VALUES:  A load of strong and often gruesome violence, lots of nudity, a fair amount of bad language, some horrific images and a bit of drug use. Oh, and some sex

TRIVIAL PURSUIT: Director Ti West grew up in Delaware and went to the School of Visual Arts in Manhattan.

HORROR FILM ANTHOLOGY LOVERS: This comes from a tradition of horror film anthologies, several tales (often with different directors) linked together by a single story; among the more recognized anthologies include Twilight Zone: The Movie, Creepshow, Tales of Terror, Dr. Terror’s House of Horrors, Trilogy of Terror, Cat’s Eye and The House That Dripped Blood.