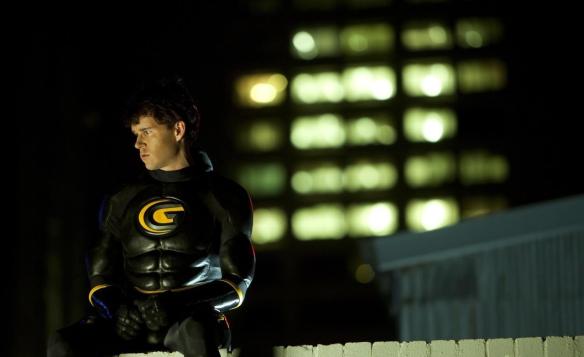 Even a superhero needs an occasional break.

What is real and what is in our imagination is simply a matter of our own personal perceptions. For some of us, the line between the two is thinner than others; that fine line and the ability to recognize where it is can be the difference between genius and madness.

Griff (Kwanten) is a cubicle cowboy in Australia; a sad sack nobody who is constantly bullied by Tony (Schmitz). Griff longs to be a caped crusader, a crime fighting superhero who dispenses justice along with an occasional bon mot. His brother Tim (Brammall) is very worried about Griff who seems to be losing his grip on reality. Tim’s girlfriend Melody (Darmody) on the other hand thinks Griff is more than all right; in fact, she thinks she has the potential ability to walk through walls. When Tim receives a super suit in a mysterious package that allows him to turn invisible, the evildoers of Sydney need to be on their toes!

With a zealous policeman (Phelan) on his tail, Griff seems to be drifting further and further away from reality. He is caught on surveillance video sneaking around his office in his supposedly invisible super suit and as a result loses his job. This turns into a wake-up call for Griff who at last seems to be finally turning his back on his delusions and getting back in touch with reality, but this might cost him his relationship with Melody whom Griff has fallen in love with and whose affections are definitely returned. Is the new, more responsible Griff the same person she fell in love with? Or is that just an illusion as well?

There has been a rash of “ordinary superhero” movies perhaps inspired partially by the success of the Batman movies but certainly by such movies as Kick-Ass and Defendor as well. It examines our own needs to be important, respected and in control but also our fascination with superheroes and what they represent in our society.

Kwanten, best known for his work in the HBO hit series True Blood shows promise that he could go the next step into cinematic leading man territory. He is appealing in both his sad sack Griff persona as well as his heroic crime fighter role as well. With the success of DC and Marvel Comics, it stands to reason that more and newer superhero roles are coming down the pike and it wouldn’t surprise me if Kwanten doesn’t get at least considered for some of them.

His chemistry with Darmody is also strong. She’s less known here in the States having made more of an impression on Aussie TV roles but she definitely has some appeal and could very well one day get the kind of success as her fellow Aussies Nicole Kidman and Naomi Watts currently enjoy.

The problem is that Griff and Melody are both a little bit too out to left field. I kind of get the director’s stance that when we lose our imagination we lose something of our soul, but the way that Griff and Melody both behave I can’t see them surviving in the real world without someone having them both committed to a care facility for their own protection. Certainly the actions they take in the movie put them both in mortal danger which of course works in the movies but I couldn’t help but wonder “Isn’t there someone keeping an eye on these two people?” You still end up liking them but you fear for not only their sanity but for their well-being as well.

WHY RENT THIS: Charming. Kwanten and Darmody are both appealing leads.

WHY RENT SOMETHING ELSE: Griff and Melody are maybe too out there to be believable. Doesn’t hold up well with other movies with a similar theme.

TRIVIAL PURSUIT: The movie was inspired by writer/director Ford observing a small child playing while sitting in a cafe one day.

NOTABLE HOME VIDEO EXTRAS: There is a director’s video log in which first-time director Ford talks about some of the pitfalls of being a rookie.

NEXT: Change of Plans