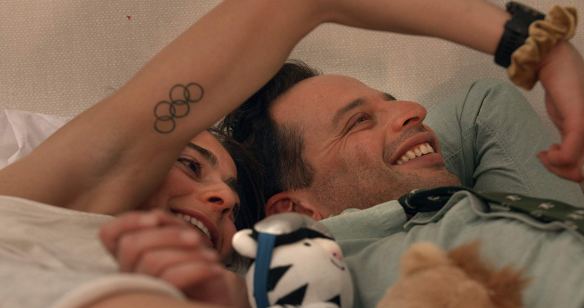 Armed with a minimal crew and a largely improvised script (that never feels it), Teicher, co-writer Pappas and a small cast were granted extraordinary access to the Olympic village at the 2018 PyeongChang winter games. While the backstage pass is half the fun here, it is not all of it.

Penelope (Pappas, who was an Olympic runner at the 2016 Rio games in real life) is a cross-country skier on the American team who approaches the opening ceremony of the Games with a mixture of childlike wonder and deer-in-the-headlights fear. Her event will be one of the very first of the games so she doesn’t have a whole lot of time to take it all in. She does her best – gets a personal best time, as a matter of fact, but as is sometimes the case, her best isn’t good enough. She finishes out of the medal competition.

She’s left with a whole lot of time and not much to do. On the other hand, Ezra (Kroll) is a volunteer dentist, an Olympic junkie who has waited for this moment for his entire life. He loves chatting with the athletes and sees that Penelope is a bit down in the dumps, so he approaches her. Eventually the two form a friendship and while both are a bit awkward – Penelope’s training precluded any sort of social life, while Ezra is hampered by a fiancée back at home that he is taking an unwilling break from – they circle each other, unsure of what move to make next.

All this takes place amid the pomp and pageantry of the Games and on “dates” in PyeongChang itself. Teicher, who did most of the filming and sound recording himself, manages to capture a kind of rom-com sweetness that transcends the location which is quite a feat. Kroll and Pappas have real chemistry together and we get a real sense of what Penelope is going through, a kind of “What now?” moment that she doesn’t have an easy answer for. She is alone in a crowded room, not possessed of the self-confidence some of the other athletes have, and her isolation is often palpable. She has no friends and makes tearful calls to her coach at home, exclaiming on what a great time she’s having while it’s clear she is hurting.

Ezra, likewise, is finding it harder than he thought. He is not happy with his life and suspects that his fiancée might not be the right woman for him – he loves to travel and she hates leaving the States. Still, he is not a man who likes to take chances – he’s a dentist fer chrissakes – who yearns to step out of the rut he’s in but is unsure if he has it in him to do so.

In a very real sense they are good for each other, but like most real people they are also bad for each other. The two fight – over his inability to take a chance, over her self-centered devotion to her sport – and one wonders what kind of future the two could possibly have. In addition, there’s an age factor – he’s 37, she’s 22 – which isn’t belabored in the film but is clearly on Ezra’s mind.

The ending kind of gets to a point that you think it’s going to go but it doesn’t get there the way you thought it might. You at times want to shake Ezra and tell him “WHAT’S THE MATTER WITH YOU? KISS THE GIRL, DAMMIT!” and at the same time you want to shake Penelope and tell him “WHAT’S THE MATTER WITH YOU? YOU’RE COMING ON TOO STRONG!!” The script does follow kind of a standard rom-com formula and like I said it doesn’t always go about it in the way you’d expect, but those who love this much-abused genre are going to enjoy this. It’s even appropriate that it came out on Valentine’s Day. Not a bad way to spend a cold night with your honey, in front of a TV set with a warm blanket, hot cocoa and this film. There is nothing wrong with having the cockles of your heart warmed, after all.

REASONS TO SEE: There is a lot of charm here.
REASONS TO AVOID: There is also a few rom-com tropes.
FAMILY VALUES: There is some profanity and some sexual situations.
TRIVIAL PURSUIT: This is the first film that was allowed to shoot in the Olympic village during an Olympic games.
BEYOND THE THEATERS: AppleTV, Vudu
CRITICAL MASS: As of 2/14/20: Rotten Tomatoes:63% positive reviews: Metacritic: 56/100.
COMPARISON SHOPPING: The Cutting Edge
FINAL RATING: 6.5/10
NEXT: Beautiful Boy