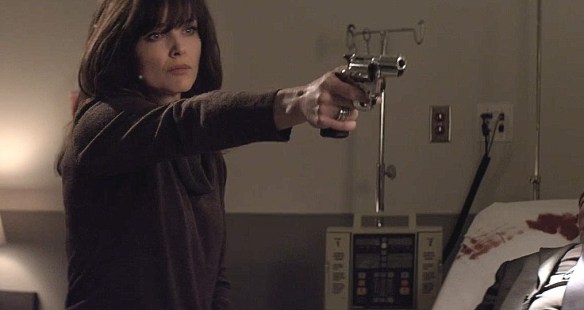 Healthcare isn’t what it used to be.

A mother’s love is pretty much about as certain as death and taxes. There aren’t many moms who wouldn’t go through hell for the sake of their child and if that child’s life hung in the balance, well there isn’t anything they wouldn’t do to save them

Sharon (Meyer) is throwing a dinner party to welcome her adopted daughter Maggie (Melanie) home from medical school. However when she arrives home she suddenly collapses at the dinner table and is rushed to the hospital. As it turns out, Maggie has a rare disease that is causing her kidney to fail and she needs a new one pronto. As she is adopted, nobody in Las Vegas – where Sharon lives – can help. They’ll have to find her birth mother who Sharon only knows lives somewhere in Mexico.

But Maggie being adopted is a bit of a misnomer. She was in fact stolen from her birth mother Carmen (Velazquez – Narro as the younger version in flashbacks) and sold to the rich American. Sharon wasn’t aware of this although Malcolm (Denison), her late husband’s muscle man, knew the score. So he heads off south of the Border to bring Carmen back. He doesn’t mention that her long lost daughter needs a kidney. Carmen’s husband Omar (Compte) is somewhat suspicious at the sudden reunion and insists on coming along.

Carmen has the same disease as her daughter does and the transplant may very well kill her – which makes one wonder if poor Maggie is getting a kidney that will last her for very long. Sharon is used to getting what she wants but as the power shifts from the wealthy Sharon to Carmen who wants justice for having her child stolen from her, Maggie’s life will hang in the balance.

I’ll give credit where credit is due; this is a really good concept for a film and it brings up some solid socioeconomic points not to mention some pretty strong emotional ones. Unfortunately, the opportunity provided by a good concept is squandered in execution, mainly because the movie ends up coming off like a particularly hysterical telenovela.

Some of the plot points strain credibility, particularly near the end when Carmen threatens Sharon, and by extension, her own daughter. It comes out of left field and especially when Carmen went through such heartache and at last is reunited with her daughter I don’t think that she would do anything to endanger her daughter’s life – but beyond that there’s also the dialogue which does sound like soap opera 101. Not that I have anything against soap operas but the movie takes all the worst elements of that particular art form which may well thrill fans of that genre but if, like me, you’re not quite so enamored this might not be good news at all

Meyer, who was one of my favorite actresses of the 90s (I’ll never forget her work on Starship Troopers and Eyes Wide Shut) puts as much dignity as she can muster into the role. Velazquez who has done some stellar work on her TV shows Major Crimes and Six does what she can with a character who is often contradictory which I suppose makes her fairly realistic. Playing the innocent martyr is Melanie who at least manages to look beautiful and ill at the same time.

Much of the rest of the cast injects some hysterics in their histrionics. I don’t blame them to be honest; with a movie like this chewing scenery is really the only option for an actor and a lot of that goes on here. I do think this is a bit of a wasted opportunity; this could have further explored the class divide between the wealthy trophy wife of a Las Vegas businessman (I don’t think it was really necessary to make him so shady) and the impoverished hard-working Mexican girl; given the current climate of Mexican-American relations, a lot of hay could have been made of that as well although to be fair this was filmed well before Trump was elected. If the over-dramatics had been cut down in the plot, this could have been a really nice little film. Hopefully Raz’s next one will be better.

REASONS TO GO: The concept is good and Meyer handles her part like a pro.
REASONS TO STAY: The dialogue is cringe-inducing. Some of the writing is a bit on the overwrought side.
FAMILY VALUES: The movie has a bit of violence as well as discussion of a character’s rape.
TRIVIAL PURSUIT: This is the feature directing debut for Peyv Raz.
BEYOND THE THEATER: Amazon, Fandango Now, Google Play, iTunes, Vimeo, Vudu, YouTube
CRITICAL MASS: As of 10/13/17: Rotten Tomatoes: No score yet. Metacritic: No score yet.
COMPARISON SHOPPING: Finding Forrester
FINAL RATING: 4/10
NEXT: Monogamish