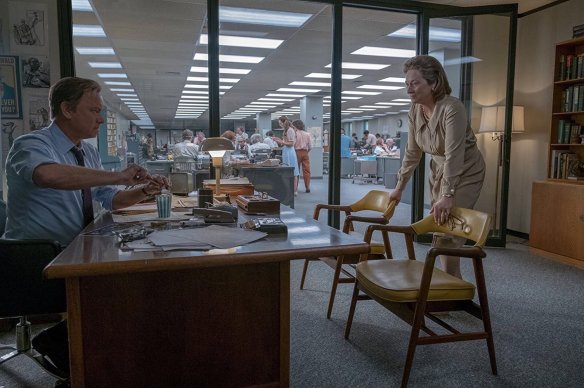 “Thanks for the coffee but my Oscar is still shinier than YOUR Oscar!”

In these troubled times, the veracity of the Free Press has been assaulted by the President. If that feels familiar to older readers, it’s because it was tried once before – by Richard Nixon. It is somewhat comforting to know it didn’t end well for him but before the Watergate scandal took him down there was the Pentagon Papers.

The Pentagon Papers were documents leaked to the press by Daniel Ellsberg (Rhys), a security consultant than employed by the RAND Corporation but previously an analyst for the Pentagon. At RAND he worked on the Pentagon papers, documents commissioned by then-Secretary of Defense Robert McNamara (Greenwood) about the decisions made during the war. After a crisis of conscience caused him to rethink his position as a defense analyst, he chose to surreptitiously remove the thousand pages of documents a little at a time to make copies of them at the ad agency of his then-girlfriend. Eventually he got the papers into the hands of the New York Times.

When the Times published portions of the Papers it was as if a bomb went off in the American consciousness. The Papers clearly showed that the war in Vietnam was not winnable – and moreover that Presidents Eisenhower, Kennedy and Johnson all knew it. The Papers also established that the government had been lying to the American public all that time. Although the Papers all concerned the tenures of those Presidents, the current President of the time, Nixon, was absolutely furious that the documents were leaked and the U.S. Government filed an injunction against the Times to suppress any further publication of the Papers. Nixon and his advisers felt that the Papers would erode American confidence in their own government which of course is what came to pass.

That’s where the Washington Post came in. Incensed at being scooped on the Papers, crusty editor Ben Bradlee (Hanks) orders his team of reporters to see if any copies of the Papers can be found. Despite the court order banning the publication of the Papers, one of the reporters – Ben Bagdikian (Odenkirk) – got in touch with Ellsberg, leading to a quandary for Bradlee and his publisher Katherine Graham (Streep) whether or not to defy the court order or do their duty to the American people.

It was a particularly quandary in that the Post was about to go public; were there to be a government action against the newspaper and the Publisher individually the badly needed infusion of cash could dry up and the Post might actually go under.

Graham was a woman of her era; in her 50s at the time that this took place, her husband had been publisher of the paper (inheriting the title from Graham’s father) she was a woman in a man’s world. When she entered the board room of her own newspaper, she was the lone woman. She was often condescended to and she herself felt more comfortable at social gatherings hanging out with the wives than with the policy makers. She did have a close personal relationship with McNamara which was a further complication.

The Post is a celebration of the free press, make no mistake about it. It also illustrates how important that a free and objective press is to the functioning of our nation. Besides that there is also a push for feminism and how the roles of women have changed as women have become more empowered. Obviously, those issues have become extremely timely in the wake of the current administration’s attacks on the press which is roundly proclaimed “fake news” if it in any way disagrees with the world view of the President, as well as the advent of the Me Too movement.

It doesn’t hurt that the movie has three of the most important names in movies over the last three decades participating. Spielberg is considered by some to be the greatest director in the history of movies and while devotees of Hitchcock, Ford, Capra and Scorsese might give that some healthy debate, none can deny that he is one of the greatest ever. Here, he’s at his very best; not a single scene is wasted and every shot not only advances the story but captures an emotional mood. There are plenty who consider Spielberg “the great manipulator” and there is some truth to that. His longtime collaborator John Williams writes a score that might be proof of that.

Hanks is not usually a name one associates with a Bradlee-like character but he has some personal connection to the former Post editor; the two were neighbors on Long Island and knew each other socially. He captures Bradlee’s accent note-perfectly as well as his dogged determination. This doesn’t compare to Jason Robards’ Oscar-winning performance as the legendary editor in All the President’s Men but it is a terrific performance nonetheless.

Streep, however, is absolutely amazing in the movie. It has garnered her yet another Oscar nomination and while she is in no way guaranteed a win, it wouldn’t be a crime if she did. Graham was a complex person who became something of an unlikely icon for the feminist movement and perhaps reluctantly so. As time went by she would become more self-confidence and assured; the events depicted here helped with that, but she was truly a woman who reinvented herself in middle age at a time when women were largely still shackled to the kitchen.

I will admit that the Linotype machines and printing presses depicted here brought me some nostalgia; as someone who worked at the San Jose Mercury News in the 80s and 90s I was familiar with the machinery and seeing them in action here did give me the warm fuzzies. So too did seeing the press at the height of its power and significance; in the years before being purchased by corporate entities who largely stifled their search for truth in favor of a search for advertising dollars. Newspapers remain relevant today (the Post continues to do excellent reporting on the Russian voting interference scandal as well as other important news stories of our day) but they have changed quite a bit. People tend not to get their news from newspapers so much but from social media sites, a dangerous practice. It is the responsibility of the citizen to be vigilant in order to keep our own government in check. When we remain firmly ensconced in echo chambers that do little more than validate our own point of view, we lose sight of what is actually happening. That’s how democracies fail.

REASONS TO GO: This is the work of one of the best directors ever at the top of his game; there’s not a single wasted scene. Streep delivers an incredible performance. The film manages to tackle both freedom of the press and the inequality of the treatment of women. Despite being set more than 40 years ago, the events are just as timely as ever
REASONS TO STAY: Those who are blind supporters of the President will see this as a slap in the face.
FAMILY VALUES: There is a fair amount of profanity as well as a scene of war violence.
TRIVIAL PURSUIT: Stuhlbarg appears in three of the films nominated for a 2018 Best Picture Oscar (this, Call Me by Your Name and The Shape of Water) but was not nominated for a Best Supporting Actor for any of them.
CRITICAL MASS: As of 2/20/18: Rotten Tomatoes: 88% positive reviews. Metacritic: 83/100.
COMPARISON SHOPPING: All the President’s Men
FINAL RATING: 10/10
NEXT: Cassidy Red