Tom Hanks and Felicity Jones at least got their exercise regimens in.

I don’t know if it’s fair to characterize the novels of Dan Brown as an acquired taste. After all, he’s sold millions of copies of his Robert Langdon novels starting with The DaVinci Code. His plots tend to be complicated and sometimes overly so. Still, they can be an entertaining read. Now, his fourth novel in the series has become the third filmed version of the franchise

Professor Robert Langdon (Hanks), one of the world’s leading minds, wakes up in an Italian hospital with no memory of how he got there. Dr. Sienna Brooks (Jones) is trying to establish how he was shot; there is a head wound where a bullet apparently grazed his skull which might account for his amnesia. Just then a remorseless assassin (Ularu) comes for him, forcing the professor and doctor to flee.

In fact, it turns out a lot of people are after Langdon. The World Health Organization, with Dr. Elizabeth Sinskey (Knudsen) and .investigator Christoph Bouchard (Sy) are chasing Langdon with an unknown agenda. The Italian police are after him after surveillance footage reveals that he stole the death mask of Dante Alighieri  whose Inferno holds clues to a mad billionaire’s (Foster) plan to “cull the human herd” by releasing a plague that will kill half the world’s population and immediately ease overpopulation concerns. A bit of a drastic cure, that.

In any case as Langdon’s memories begin to slowly return, he finds he is in a race against time to find the killer virus and stop this mass murder on a demonic scale. In order to do that he has to follow a chain of clues left behind by the billionaire who killed himself rather than reveal the location of the virus’s delivery system to the WHO. Who can Langdon trust? As it turns out, not the people he thinks.

I have to admit I found the first film in the series, The DaVinci Code, to be genuinely entertaining – the follow-up, Angels and Demons, less so but still acceptable. The third in the series is by far the least entertaining so far; the preposterous nature of the plot has become far too glaring to ignore and the payoff not enough to be worth the ride. Hanks looks a bit tired here; I suspect he’s given Langdon about all he can give him as an actor. There were rumors that both Howard and Hanks were leaving the series after Angels and Demons but apparently they were prevailed upon to do the third film after pre-production on a proposed film version of the third book in the series, The Lost Symbol, stalled.

Again, Howard utilizes an international cast that is largely better known in Europe than in the United States with the exception of the Oscar-nominated Jones who shines here, reinforcing my opinion that she is one of the best young actresses out there who is likely to be one of the most honored actresses of her generation when all is said and done. Khan, who plays the nefarious head of a shadowy security agency, also has some meat on the bones of his character that he can work with but his part is all too brief alas.

Seeing the sights of Florence, Cambridge and Istanbul (among other places) is pleasing, particularly to me personally as I was in Florence just this past May and can attest to the beauty of the city having seen the Ponte Vecchio and the Uffizi with my own eyes. It certainly ignited the tourist in my soul to see some of the sights that the movie highlights. If you have that tourist gene inside you, you’ll likely be pleased by this as much as I was, but it’s not really enough to recommend a movie just for the setting. It’s rough when every ten minutes or so you’re rolling your eyes at yet another plot turn that defies logic. Even Dan Brown’s most loyal fans will be shaking their heads at this one.

REASONS TO GO: Plenty of lovely tourist opportunities for places like Florence and Istanbul.
REASONS TO STAY: The plot is absolutely preposterous.
FAMILY VALUES:  Action and violence in plenty here, as well as a few disturbing images, brief sexuality, some disturbing thematic elements and brief foul language.
TRIVIAL PURSUIT:  This is the first Robert Langdon film not to be written by Akiva Goldsman.
CRITICAL MASS: As of 12/6/16: Rotten Tomatoes: 20% positive reviews. Metacritic: 42/100.
COMPARISON SHOPPING: Outbreak
FINAL RATING: 5/10
NEXT: Be My Cat: A Film for Anne 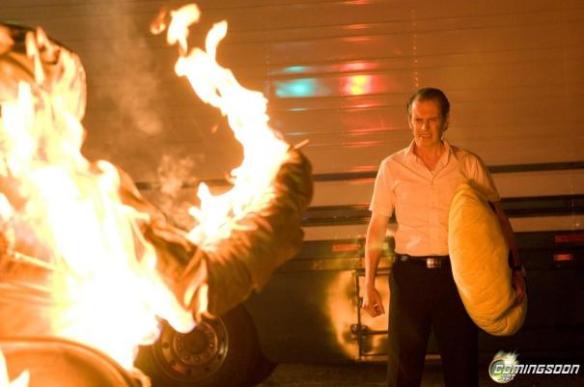 Some pictures can't be done justice by a simple caption.

Sometimes, the most expedient solution to facing one’s demons is to run away. It is also one of life’s truths that the easy way is generally not the right way to deal with problems.

John Alighieri (Buscemi) has a particular demon – gambling. He has lost everything due to his addiction and is desperately trying to find himself a “normal life” and by fleeing the gambling dens of Sin City may have found it in the auto insurance company he finds employment at in Albuquerque, New Mexico.

But what is insurance but a different kind of gambling? And although John has found himself a new girlfriend – the effervescent Jill (Silverman) who is far prettier than John could have possibly hoped for – he still finds himself in need of cash, so his boss Mr. Townsend (Dinklage) gives him a mission for his sins . Okay, that’s a different allegory.

He sends John out into the field to investigate the claim of one Tasty D. Lite (Chirqui), a stripper in Las Vegas. Accompanying John is Virgil (Malco), a taciturn man who is one of the company’s top investigators.

Into the desert they go, where they meet a strange collection of nutjobs and oddballs, like Smitty the Carnival’s Flaming Man whose fire suit has malfunctioned, going off every twenty seconds or so, turning him into an inferno. Smitty has to wait until the fuel is exhausted but has a desperate craving for a cigarette, which isn’t exactly fire-retardant.

Then there’s Militant Ned (Nelson), a nudist with an automatic weapon dead set on preventing anybody from entering his land. And Tasty herself, who is in a wheelchair after her accident; John asks her for a lapdance which she gamely provides.

The whole point, as Virgil informs John, is to find a way to deny the claim. As John discovers, a normal life may be a whole lot less fulfilling and honest than the one he was trying to avoid, one which he meets head-on in the shopping marts and casinos of Las Vegas.

First time filmmaker Rhodes loosely based his script on the Inferno of Dante Alighieri, and all the temptations show up in one form or another – some more obliquely than others. The problem here is that for a black comedy, there’s far more black than comedy. Some of the bits are pretty funny (the Flaming Man bit for example) while others are mere head-scratchers.

Buscemi is perfectly cast, playing a man who is not entirely sin-free who is in a constant state of confusion. Nobody does the guilty conscience like Buscemi. Dinklage as always strong in his role, playing the money-grubbing and bullying boss to perfection. Silverman, also as always, is wasted in a role that plays on her sex appeal but doesn’t use any of her comedic talents.

This is a wildly uneven movie, well-done in some parts and horrible in others. The concept itself is interesting, but when you think about it, how many people know their Dante well enough to really figure out what’s going on, or more importantly, care? In your case, it’s probably a wash; Buscemi is worth checking out but there is little more than that out there that will either make any sense or worse still, elicit any laughter.

WHY RENT THIS: Buscemi, Malco and Dinklage are solid and the quirky characters that show up throughout the film are at least entertaining.

WHY RENT SOMETHING ELSE: Wildly uneven; some of the bits work like magic, others fall completely flat.

FAMILY VALUES: There is plenty of bad language and a little bit of nudity.

TRIVIAL PURSUIT: Spike Lee was one of the producers for the film.

BOX OFFICE PERFORMANCE: $111,731 on an unreported production budget; I’m thinking that the movie was not profitable.