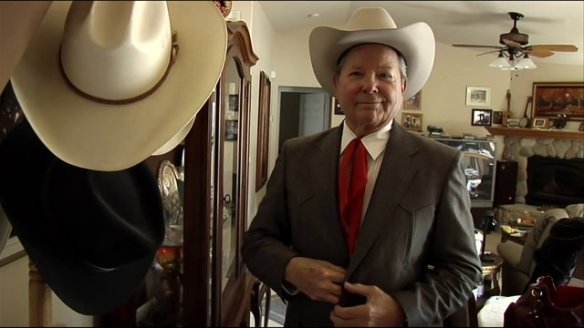 Even for country music fans, the name of Billy Mize isn’t necessarily a familiar one. One of the progenitors of the Bakersfield Sound, which came to rival that of Nashville on the country music scene in the 50s (and continues to be a huge influence on modern country music even today), he helped launch the careers of Merle Haggard and Buck Owens, both of whom made their television debuts on television shows in the Los Angeles-area that Mize hosted.

Mize had all the tools to be huge himself; good looks, a self-effacing downhome attitude, legitimate talent both in musicianship and songwriting and a silky smooth voice. However, he made a choice early on to forego touring and concentrate on television as a means of promotion in order to stay close to his family. It’s not easy to say whether Mize was aware of the cost of that decision, but certainly it did contribute to him not achieving the status he should have had.

His life wasn’t one of glamour and prestige although he lived comfortably enough; it was one that had a great deal of heartache. He performed until he was 59 years old, when a massive stroke robbed him of his voice. I can’t imagine a hell any more terrible for a singer than to be without a voice.

Yet he still manages today, performing on guitar at local clubs in the Bakersfield area where he continues to live. His ex-wife Martha remains a loyal friend, sitting next to him during interviews for this film in which he speaks haltingly but displays a great deal of humor.

Most of the film revolves around an impending tribute concert at Buck Owen’s theater in Bakersfield on the occasion of his 80th birthday. He had been continuing speech therapy in an effort to sing again and was hoping to sing for the first time onstage in more than 20 years at the concert as a kind of birthday present to himself, his fans and his colleagues.

It should be said that the music here is mostly Mize although we do get some performances of other artists performing Mize’s songs. This kind of country music may not be your cup of tea – it isn’t mine – but I found myself appreciating it more than I expected. Part of the attraction, I think, is knowing that this is some of the finest music of the Bakersfield variety that has ever been performed.

Buck Owens is, for many, the mainstay of the Bakersfield scene and he certainly brought the sound into the mainstream, but he isn’t as well-regarded within the community as either Mize or Merle Haggard. I found that interesting to say the least. It should also be said that there are plenty of performers outside of Bakersfield who appreciate and are influenced by Mize .

Mize is regarded with affection by many in the country music community, particularly those who are based on the West Coast. As an influence, the man looms large in Bakersfield and beyond. As they illustrate in the movie, the Bakersfield sound originated in honky-tonks more than in recording studios and the music was built for people to dance. While the movie relies a bit overly much on standard documentary format and too much on talking head interviews, it certainly will motivate even those (like myself) who aren’t particular fans of country music to get up and dance for a man whose story deserves celebration.

REASONS TO GO: Compelling story about a performer many have forgotten. Surprisingly relevant music.
REASONS TO STAY: Relies too much on talking heads. Those who hate country music will likely not find a reason to watch this.
FAMILY VALUES: Some adult themes.
TRIVIAL PURSUIT: Saunders is actually the grandson of Billy Mize.
CRITICAL MASS: As of 5/21/15: Rotten Tomatoes: No score yet. Metacritic: No score yet.
COMPARISON SHOPPING: Muscle Shoals
FINAL RATING: 6/10
NEXT: Mad Max: Fury Road