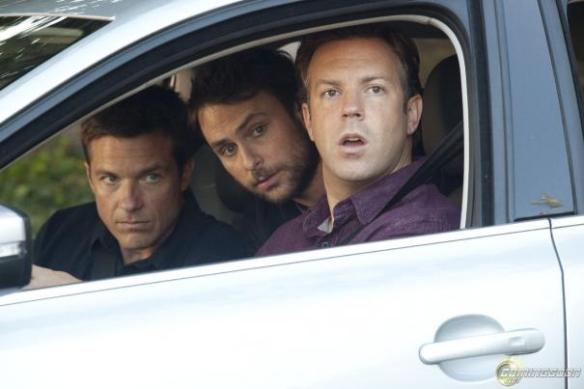 A trio of cubicle cowboys suffers from their own particular form of Purgatory; one has a psychotic boss who delights in making him squirm. Another has a female boss who thinks sexually harassing her employee is a form of foreplay. A third has a boss who might well be insane, giving orders to fire people on the flimsiest of pretenses. All three agree their lives would be much better without them. But how can three guys who are about as violent as a Smurf hope to put together a murder scenario for three people? With the help of a professional, that’s how.

Rating: R (for crude and sexual content, pervasive language and some drug material)

(Sundance Selects) Buck Brannaman, Robert Redford, Reata Brannaman, Betsy Shirley. Here is an amazing documentary on the life of Buck Brannaman, the man who was the model for The Horse Whisperer and served as an advisor on that film. These days he travels the country, giving clinics on humane ways for horse owners to train their horses rather than the barbaric practice of “breaking” them. His own childhood of abuse gives him insight into the plight of the horses. For those who want to know what I thought of it, here is my review.

Rating: PG (for thematic elements, mild language and an injury)

Page One: Inside the New York Times

(Magnolia) Brian Stelter, Tim Arango, David Carr. A rare but fascinating glimpse inside the inner workings of America’s most prestigious newspaper. Particular attention is paid to the Media Desk and to columnists covering our changing world. This is the story of a year in the life of an institution struggling to survive as the news gathering industry changes around it.

(Columbia) Kevin James, Rosario Dawson, Leslie Bibb, Joe Rogen. When a kindly zookeeper’s chosen profession gets in the way of his love life, he resolves to get a new career. This doesn’t sit well with the animals under his care who don’t want to lose the best keeper they’d ever had. They resolve to help him get the woman of his dreams but to do so they have to let him in on a huge secret – they can talk like humans. Paging Doctor Doolittle, Doctor Doolittle your lawyers are calling.

Rating: PG (for some rude and suggestive humor, and language)