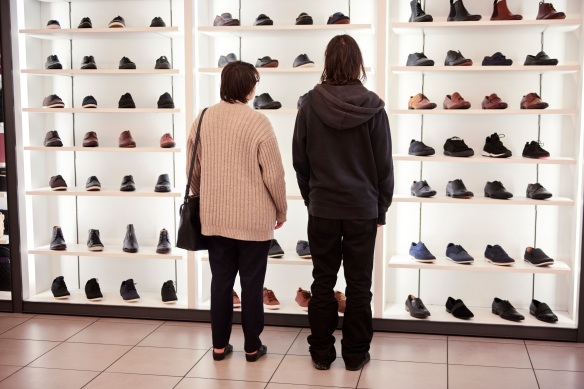 So many shoes…so little time.

I suppose there are few tortures for a 15-year-old boy than spending a summer alone with his mom. That must go double if mom is a divorced cardigan-wearing librarian and the boy is into metal in a big way. How do two people so disparate find any sort of common ground?

Daniel is now faced with the prospect of summer at home in a dull, boring British suburban existence with his mom Sue (Dolan) who might have been fun once upon a time, but her idea of a good time is going off to the seaside and attending a demonstration on how to make fudge.

Like most boys his age, Daniel knows only that he hurts and doesn’t know how to express it, so he takes out his rage on everyone by being an absolute douche to his mom. She reacts with patience and compassion. Sue has retreated into her own shell and is only beginning to emerge from it, going on a date with Daniel’s history teacher (Brydon, who should be legally required to do the “Man in a Box” voice in every movie he’s in) but he turns out to be a massive jerk.

The more the summer goes on, the more frustrated Daniel gets. His best friend Ky (Speller-Girllott) and he have a falling out. His attempts to join a metal band are frustrated again and again. And his mom insists on taking him shoe shopping for an upcoming wedding he plainly doesn’t want to attend. This is going to be a long summer.

The movie is based on a Joff Winterhart graphic novel and as adapted by Lisa Owens, it captures the nadir of teen angst that only a 15-year-old son of divorced parents can experience. Daniel is not the easiest kid to like, but deep down there’s a decent guy under there; his mom knows it and even though he drives her up a tree, she hangs in there and regards him with a certain sense of droll humor although from time to time she clearly wants to give him a good shaking. Sue isn’t perfect either, but she’s trying and she hasn’t exactly had the easiest time of things, as a poignant conversation with her son late in the film shows. Teens have a tendency to not realize their parents were once like them, full of dreams and aspirations, and trying to fit in, be cool and figure things out. Parents have a tendency to forget what it’s like to be those things in their zeal to have them avoid the same mistakes that they made.

The movie has a lovely bittersweet quality to it, and the dry British humor that tends to get me going every time. Bird further has the soundtrack full of Belle and Sebastian songs which would seem at first glance to be incongruous, but actually turns out to be the perfect fit. As we emerge from a long and difficult winter with the promise of a long and difficult summer ahead, movies like this can be a tonic, reminding us that there is something magic in the warm months. It’s not the memories of good times so much but the love of the people we are with that make the magic. It would do us all well to be reminded of that.

REASONS TO SEE: Great Belle and Sebastian songs. Nice dry British humor.
REASONS TO AVOID: A little bit on the vanilla side.
FAMILY VALUES: There is a fair amount of profanity including some sexual references.
TRIVIAL PURSUIT: Bird is best-known for his work on the British television show The In-Betweeners.
BEYOND THE THEATERS: Amazon, AppleTV, Fandango Now, Google Play, Microsoft, Vudu, YouTube
CRITICAL MASS: As of 2/21/21: Rotten Tomatoes: 91% positive reviews. Metacritic: 57/100.
COMPARISON SHOPPING: Adult Life Skills
FINAL RATING: 7/10
NEXT: Crisis