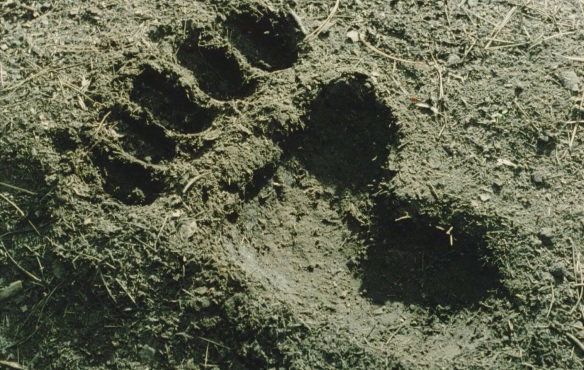 Some movies are most definitely products of their eras. You can look at them and immediately say “Oh, that’s a noir film from the 40s” or “that’s a 70s anti-hero film.” The 80s were like that; movies from that decade had a style and a presence all their own, much like the music and fashion of the time. Sometimes, that’s a very good thing. In this case, not so much.

When poachers kill a bear cub and remove its gall bladder for its aphrodisiac qualities – one would think it would work much better as a laxative – mama bear goes ballistic and starts shredding every humanoid she lays eyes on in Summit National Park. Park ranger Nic (Inwood) is trying to rally his rangers for an upcoming rock concert that park manager Ms. Draygon (Fletcher) insists must go off without a hitch, 15-foot-bear or not. The hunky ranger brings aboard the “best grizzly tracker” in the business, the French-Candian Bouchard (Rhys-Davies) with an accident that would embarrass Pepe LePew – much to the horror of “bear manager” (don’t all national parks have one?) Samantha (Raffin). Ahh, but the show must go on, something that the makers of this film took much to heart.

The story of how this movie finally made it into theaters 38 years after it was filmed probably makes a more interesting movie than the one that actually got made. Lensed at the tail-end (‘scuse the pun) of the killer animal craze that Jaws created, this sequel that nobody wanted was filmed in Hungary while the Cold War was still in full swing and the Iron Curtain was still Iron. The producers apparently ran out of funds before post-production could be commenced, and the uncompleted movie languished on the shelf, famous only for the future stars that appeared in it – all cast because of their famous relatives, being unknowns at the time. In fact, this movie has three Oscar-winners in its cast (two of them are killed before the movie is even five minutes old, so there’s that) but you’d never know it. But somehow, an unfinished work print started making the rounds on YouTube and at genre film festivals until original producer Suzanne Nagy, realizing that there was an audience for this, finished the special effects and got the movie edited for release. There is no disguising the mechanical bear, however.

Interspersed with the action is concert footage of very bad Hungarian new wve bands performing at the faux concert….in Hungarian. Yes, this concert that is supposedly taking place in an American national park features songs sung in a language only a tiny percentage of the population here speaks. And the music is about what you’d expect it would be.

This is the kind of movie that’s enjoyed more in retrospect. While you’re actually watching it, you might find yourself having a hard time keeping from turning the bloody thing off. In fact, those who do see the movie from start to finish should get some sort of merit badge.

So why the score it got? I’ll be honest with you, the movie deserves a much lower score and in fact my initial rating was going to be much lower, but the fact of the matter is as I sit down to write this, the more I think about the movie, the more enjoyment I’m getting out of remembering how ridiculous it was. I don’t know if Clooney even remembers making the film – I assume he likely remembered a trip to Budapest – but I’m sure he was just as happy it never was released into theaters. I would love to hear what he thinks of its release…I can only imagine the expression of pain he might extrude. All in all, with Rhys-Davies and Fletcher gamely delivering what they can in the way of performances and a kind of car crash vibe that really takes hold well after you have finished watching, the experience is one that I am glad of – and one I sincerely never hope to repeat.

REASONS TO SEE: Unintentionally funny, sort of like a Plan 9 From Outer Space.
REASONS TO AVOID: Very much a product of its time and not in a good way.
FAMILY VALUES: There is some sexuality and plenty of violence.
TRIVIAL PURSUIT: Fletcher and Alaimo, who have no scenes together here, would go on a decade later to play major recurring characters in Star Trek: Deep Space 9.
BEYOND THE THEATERS: Amazon AppleTV, Fandango Now, Google Play, Microsoft, Redbox, Vudu, YouTube
CRITICAL MASS: As of 1/27/21: Rotten Tomatoes: 9% positive reviews, Metacritic: 7/100.
COMPARISON SHOPPING: Grizzly
FINAL RATING: 5/10
NEXT: 76 Days