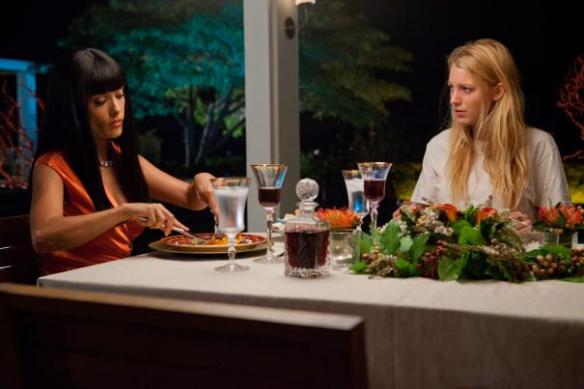 Blake Lively is jealous that Salma Hayek gets a meal and she gets a salad.

When pushed to the wall, we all do what we have to in order to survive. We may be the most peaceable souls normally but that all changes in certain situations. Sometimes, we must become savages in order to make it through.

Chon (Kitsch) and Ben (Johnson) have a business together. Their business happens to be growing marijuana. Ben is a botanist and a businessman from Berkeley. He has managed to breed the most amazing weed on the planet and has put together a network of distributors that keeps costs down and quality high.

Chon is the big stick in the equation. Ben’s business model doesn’t call for violence often but when it’s needed Chon supplies it. He’s a vet fresh off of tour in Afghanistan who has a cynical outlook on life. He’s the yin to Ben’s yang….er, or vice versa.

Then it becomes clear that the Baja cartels want to invade. Alex (Bechir), a slimy lawyer, puts what sounds like a reasonable proposition out to Chon and Ben. Chon is suspicious and Ben is more interested in getting out of the business entirely. However when they turn down the offer, Elena (Hayek), the head of the cartel, sics her vicious enforcer Lado (del Toro) on the boys. He discovers their weakness is O (not orgasms, Ophelia who provides them – she likes to be called O because she hates her name by the way) and kidnaps their weakness.

At first Chon and particularly Ben are so concerned with O’s safety that they’ll do literally anything to ensure it. But as they get their composure back it becomes clear that once the cartel gets what they want (their superb weed and their business model) all three of them will be disposed of so it’s all-out war – reluctantly on Ben’s side. And in any war, there are casualties.

Say what you want about Oliver Stone’s politics, his point of view, the man can direct – JFK is one of my all-time favorite movies. It’s just that sometimes he has a habit of inserting himself into a movie – the good ol’ “Look Ma I’m Directing” syndrome, or LMIDS.

Much of the problem is in the narration. Blake Lively is a fine actress but there is just far too much narration and what that is generally is the filmmaker inserting themselves into the story. Trust the story to tell itself – and trust the actors to convey what’s in their heads. If you have to narrate every scene, you’re selling your story and your cast short.

And part of the problem is also in the story itself. The main characters are a little narcissistic, a bit naive, and they do a lot of drugs. I mean Ben, O and Chon smoke a lot of their own product. That may make it seem like they’re just kids in paradise but in reality they’re criminals, selling illegal narcotics. They do some pretty bad things along the way which might be part of Stone’s message, but I’ve never been a fan of 70s movies that require you to root for the bad guy who’s less bad.

And there are some pretty impressive performances here, particularly from del Toro who’s as magnificent a villain as we’ve seen since Javier Bardem in No Country for Old Men and Christoph Waltz in Inglourious Basterds. He delights in inflicting pain and torment but he’s all business as well. He’s as frightening an enforcer as you’re ever likely to meet. Not that you meet a lot of enforcers.

For all intents and purposes this is a kind of Jules et Jim for stoners but done as a crime drama with a side of brutality. Does that really sound like an interesting film to you? Maybe it is and I’m just missing it but quite frankly I never connected to the movie and I usually do with Stone’s works. I haven’t even mentioned the ending which is really jump-the-shark bad. It’s definitely a LMIDS move that adds an additional unnecessary fifteen minutes onto the film and for no other reason than for the filmmakers to pull a fast one on their audience.

I’m not one for recommending this but this is the kind of movie that probably should best be experienced while bombed out of your gourd. It will help with the somewhat unlikely plot and the somewhat unlikable characters. But mostly, it will help with the directorial parlor tricks that serve to take you out of the film and remind you that this is an Oliver Stone Production. We only need the opening credits to remind us of that; anything else is just an overactive ego.

REASONS TO GO: Del Toro may well be the best screen baddie in the business at the moment.

REASONS TO STAY: Overly narrated and too many cutesie directorial moves. Very difficult to get invested in the main characters. The ending is really godawful.

FAMILY VALUES: There is a whole lot of drug use – and I mean a lot. If that kind of thing makes you uncomfortable, this isn’t the movie for you. There’s also a lot of violence, a bit of torture, plenty of sex, some gruesome images, nudity and pretty much constant cursing. This is what they call a “Hard R.”

TRIVIAL PURSUIT: Uma Thurman was cast to play Ophelia’s mother but her part was cut from the film.

CRITICAL MASS: As of 7/24/12: Rotten Tomatoes: 54% positive reviews. Metacritic: 61/100. The reviews are fairly mixed, trending towards the positive.

HACIENDA LOVERS: Elena lives in two homes; one in Mexico and one in California – both are hacienda-style villas that are excellent examples of the form of architecture so prevalent in the American Southwest and Mexico.

NEXT: Father of Invention