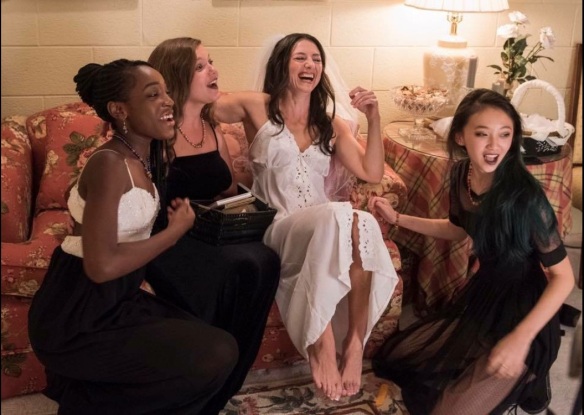 In a family with fourteen kids, every night is a girl’s night out!

Family is family; they come in all shapes and sizes. One person’s idea of what a family is may be completely different than what another person might think they are. No two families are ever alike; they all have their own dynamics, their own issues.

\Susan Song (Nikolovsky) is a cheerful 40-something dentist who is a divorcee left with seven adopted kids of various ethnicities. She meets ex-MMA fighter and current gym owner Cole Bennett (Wallen), the son of a Saturday morning TV show host (Haskins) who something of a touchy-feely version of Bill Nye the Science Guy. He’s a widower who, like Susan, has been left raising seven adopted kids of various ethnicities on his own.

The two hit it off and begin dating – awkwardly. It becomes clear soon enough that the two belong together but a family of fourteen kids of varying ages and ethnicities is going to be no easy task to raise. With Pearl Song (Koenig) having dreams of pop stardom, the family soon realizes they are going to have to work together to make things work for everyone. With a neighbor (Reid) who seems hell-bent on making the new blended family miserable and incidents of racism causing anguish for some of the younger kids, that’s going to be easier said than done.

This is very much a family film in the vein of Cheaper By the Dozen and The Brady Bunch. There is definitely a warmth and charm generated by the film but unfortunately it isn’t enough to overcome glaring problems. Perhaps most glaring of all is the acting; it is wooden, stiff and unnatural. The line delivery sounds more like a script reading than a finished product. It doesn’t help that the dialogue is clunky, with the jokes sitcom-stale and hoary (“Sure she’s smart and pretty and she’s standing right behind me isn’t she”) in an inoffensive way. You don’t need to be vulgar to be funny but you don’t need to be inoffensive to be family-friendly either.

When your two biggest names come from Sharknado and Saved by the Bell you have problems. There’s just nothing here that approaches even the lowest standard of acceptable filmmaking. To be fair the writers do attempt to address 21st century family issues like racism, blended families, financial issues and bullying but the problem here is that it doesn’t address them believably.

I get that indie filmmaking sometimes requires a little bit of a lower bar when considering the inexperience of a newer cast and crew but this is more like a filmed version of a community theater play and a bad one at that. In fact, saying that is an insult to community theater and I don’t mean it to be. There’s nothing about this movie that I can recommend unless you’re itching to see Tara Reid in a villainous role.

REASONS TO GO: The acting is wooden and lifeless. The dialogue is cliché. The comedy is all recycled from sitcoms.
REASONS TO STAY: Their heart is in the right place.
FAMILY VALUES: There is some sexual innuendo.
TRIVIAL PURSUIT: Dennison, who was 15 when the movie was released, was legally unable to see it in his native New Zealand.
BEYOND THE THEATERS: Amazon, Fandango Now, Google Play, iTunes, Vimeo, Vudu
CRITICAL MASS: As of 8/29/18: Rotten Tomatoes: No score yet. Metacritic: No score yet.
COMPARISON SHOPPING: Yours, Mine and Ours
FINAL RATING: 3/10
NEXT: Juliet, Naked