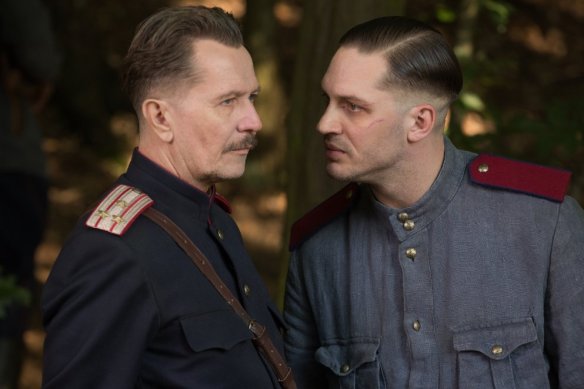 You’ve got to admire that old Soviet fashion sense.

I wonder sometimes if the current American regime misses the Soviet Union. After all, they gave us someone to hate and an ideology to deride. Then again, I suppose that ISIS has given that to us as well.

But in the bad old days there was Stalin and the Russians but despite everything they couldn’t have been worse for us than they were for the Russians themselves. The country was rebuilding after suffering horribly during the Second World War but after having Hitler’s troops knocking on their doorstep they had somehow managed to push them all the way back to Berlin. Orphan Leo Demidov (Hardy) had distinguished himself during the war, taking the Reichstag and planting the Soviet flag, becoming a national hero in the process. Boyhood friends Alexei (Fares), a wild but loyal man, and Vasili (Kinnaman), a vicious coward, had been at his side (and in Vasili’s case, slightly behind him).

These days, instead of chasing the German army Leo is chasing Soviet traitors for the MGB along with Alexei and Vasili. Their latest case, a veterinarian named Brodsky (Clarke) had resulted in Vasili shooting a mother and a father who had harbored the fugitive before Leo stopped him and humiliated him in front of the men. This makes Leo Vasili’s sworn enemy, one who will plot and scheme Leo’s downfall.

But things are already in motion. For one, Alexei’s child is found dead by the railroad tracks. It is officially ruled an accident but Alexei knows better – he knows his child was murdered. However since Stalin declared that murder was a Western capitalist affliction, it wasn’t possible for murder to occur in the Soviet Union. “There are no murders in paradise” goes the refrain (and it is repeated more than once, usually ironically). When Alexei questions the official ruling, he runs afoul of the authorities who quickly force him to recant. Leo is in fact the one who warns his friend what is happening.

Leo should be watching his own back. His wife Raisa (Rapace), a schoolteacher, has been getting restless in her marriage to the driven Leo and has been having an affair. However, Vasili makes a case against Raisa for being a traitor because the man she is seeing, a fellow schoolteacher, seems to have non-communist (or at least non-Stalinist) sympathies. When Leo refuses to denounce Raisa, he is punished by being sent to a backwater town under the command of General Nesterov (Oldman), himself in disfavor with the current Soviet regime. Normally Leo would have been executed but being a hero of the Soviet Union has its perks.

But there have been a series of child deaths in the vicinity, all with similar wounds to what Alexei’s son had suffered. Leo realizes that there is a serial killer in their midst. And since murder doesn’t exist in the Soviet Union (much less serial killers), the official position is that these deaths are all accidents. However Leo realizes that in order to protect the children of the district he will have to risk everything – including his own life – to bring the killer to justice. In the meantime, Vasili, who sees the perfect opportunity to take Leo out permanently, is closing in.

I expected this to be not very good, given that it got almost no push from the studio and received pretty miserable reviews but this is one of those times I got to be pleasantly surprised. The setting of the old Soviet Union filmed mostly in the Czech Republic – the Russia of Putin found the movie to be insulting to their history and promptly banned it – is unusual for Hollywood thrillers. The depiction here is of a drab and paranoid world in which the only colors seem to be grey and red and the only way to survive is to assume that everyone is out to get you which it seems is pretty much the case.

Hardy has become one of my favorite actors at the moment. Poised to be Hollywood A-list royalty (and will probably achieve that status with Mad Max: Fury Road later this month) he is on a role in which he seems to be incapable of delivering an uninteresting performance. His Leo is like a pit bull in many ways, but an honorable one – he doesn’t attack indiscriminately but only to those who in his view deserve it, such as traitors to his motherland. He chooses not to question the corruption that is in plain sight all around him, merely accepting it as part of the Way Things Are and when he becomes a victim of it chooses not to complain but simply adapt.

The rest of the supporting cast is for the most part solid; Rapace seems oddly subdued but still remains a very underrated actress, one who underlines how few really well-written roles for women there are out there. She makes the best of a fairly undefined character. Oldman is also another one of those actors who seems to always elevate the part he’s in whether it’s well-written or not.

While based on an actual case, this fictionalized movie comes across as a fairly predictable thriller despite being based on an international best seller which was reportedly anything but (I haven’t read it as of yet). It is the first of a trio of novels and no doubt Summit was hoping for a franchise here initially but given that the movie has been given little push and has been a box office disappointment, the other two are unlikely to be filmed.

But that doesn’t mean this isn’t worth seeing. Now largely out of first release theaters with the first blockbusters of the summer season taking the lion’s share of screens, you can still catch it in second run theaters and likely soon on VOD. It’s actually a pretty interesting film and a well-made thriller worth taking the time to seek out. It isn’t perfect but I found it to be entertaining enough to overcome its flaws.

REASONS TO GO: Hardy continues to be a reason to go see a movie all by himself. Captures the paranoia and political infighting of Stalinist Soviet Russia.
REASONS TO STAY: A bit too rote in terms of plot.
FAMILY VALUES: Plenty of violence, a few disturbing images, adult themes, some foul language and a scene involving sexuality.
TRIVIAL PURSUIT: The novel the movie is based on was inspired by the hunt for the real serial killer Andrei Chikatilo which was chronicled in the excellent HBO movie Citizen X.
CRITICAL MASS: As of 5/8/15: Rotten Tomatoes: 23% positive reviews. Metacritic: 41/100.
COMPARISON SHOPPING: Citizen X
FINAL RATING: 7/10
NEXT: Misery Loves Comedy