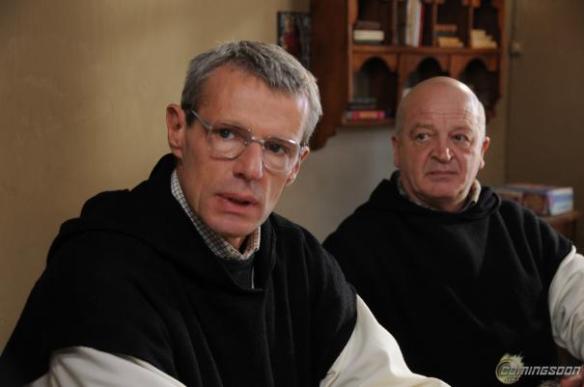 Brother Christian is none to happy that the liberalized Vatican guidelines don’t allow him to administer corporal punishment any longer.

Courage isn’t necessarily picking up a gun or a weapon. Sometimes it isn’t even uttering a cross word. Fighting for what you believe in takes a special type of courage, I’ll grant you but refusing to fight for it sometimes takes even more. Sometimes the greatest courage is to allow events to run their course.

In a small village in Algeria (not named in the movie but where the actual incident took place) in 1996, there was a remote Trappist Monastery made up of seven aging French monks. Although the village was completely Islamic, the monks live a serene pastoral life of raising their own crops and honey, praying and singing daily (the soundtrack is actually breathtaking with beautiful Gregorian chants), and dispensing medicine and clothing to the impoverished villages. They are not attempting to convert anyone to Catholicism, they simply do what they can to help and otherwise show their devotion to God through their simple lifestyle and their will to do good for those around them.

But the outside world isn’t necessarily a perfect place and Islamic fundamentalist violence has begun to show its ugly head. A group of Bulgarian construction workers are viciously attacked and murdered, their throats slit. Another woman is murdered for not wearing a veil. The violence is escalating throughout the country and the government is concerned for the well-being of the monks. They offer to relocate them somewhere that is at least temporarily safer.

However, Brother Christian (Wilson), the monk elected leader and spokesman of their little group, feels that their place is in the village where they can continue to do good work. The government offers them protection, volunteering to station military men at the monastery but Brother Christian believes this would be inappropriate. Despite the growing danger, he wants to stay. Not all the monks are on board with this idea, however.

Despite the fact that the monks live in harmony with the villagers and offer care free of charge, despite the high regard in which their neighbors hold them, the inevitable happens and terrorists begin to turn their keen eyes on the monastery. It soon becomes obvious that the monks are in mortal danger, with each one reacting in his own way to the prospect of their own deaths staring them in the face. The monastery’s doctor, the 70-something Brother Luc (Lonsdale) is sanguine but others are less so.

This was France’s official entry into the 2011 Foreign Language Film Oscar sweepstakes and it’s easy to see why. Not only is this beautifully filmed – the composition of the various scenes is as close to paintings as film gets – but it is beautifully acted as well. Lonsdale in particular will grab your attention; he is at turns cantankerous and serene. Wilson, best known as the flamboyant Merovingian in the Matrix trilogy, is a quiet leader who persuades rather than commands. His relationship with the village elders is based on trust and respect, and he knows the Koran as well if not better than the terrorists who quote it.

But this is not about terrorism or even death. It’s about belief and faith, and how powerful those things can be even in the face of pain and death. This is a movie that invites quiet contemplation. Much of the first part of the film depicts the daily life of the monks; it makes the second half so much more powerful because of it. American audiences might have trouble sitting through the first part but I found it to be very evocative. Who wouldn’t love a lifestyle so simple and so fulfilling?

This is a depiction of humanity both at its worst and at its best. You may recoil at the inhumanity and cruelty of men, but you will be uplifted by the courage and nobility of men as well. Catholics have taken their fair share of shots lately. This is a fictionalized version of these events but nevertheless I must confess that this movie made me prouder to be Catholic than I have been in a very long time.

WHY RENT THIS: Heartbreaking and soul-stirring. Marvelous performances all around but particularly by Lonsdale and Wilson.

WHY RENT SOMETHING ELSE: Very understated.

FAMILY VALUES: There are some disturbing images including one scene of devastating violence and also  bit of bad language.

TRIVIAL PURSUIT: Won three Cesars (the French equivalent of the Oscars) in 2011, including Best Picture and Best Supporting Actor for Lonsdale.

NOTABLE HOME VIDEO EXTRAS: There is a featurette in which the actual monastery where these events took place is visited, and also another one in which author John W. Kiser, who wrote a book on the events, discusses the real Tibehirine monks at Merrimack College with Augustine academics.

BOX OFFICE PERFORMANCE: $42.2M on an unreported production budget; this was undoubtedly a big hit.

COMPARISON SHOPPING: Where Do We Go Now?