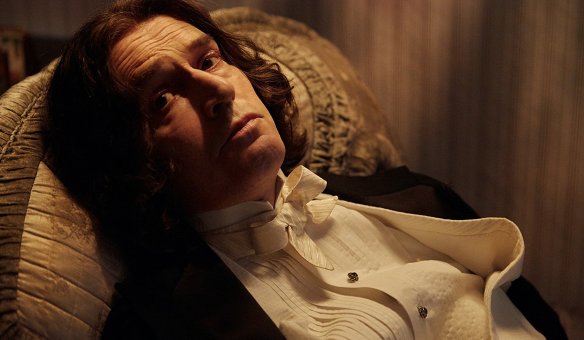 Oscar Wilde was one of the greatest wits of his time, perhaps of all time. When he was convicted on a charge of deviant behavior, he was sentenced to prison for two years of hard labor. His health broken and fed up with England, he moved to the continent where he would live out the remaining days of his life, which were not many.

This is a passion project for director, writer and star Rupert Everett, who passed on plum roles on the off chance this film would be greenlit; it took ten years before he was able to get the film off the ground. I don’t know that Everett would agree but it was worth the wait.

The movie largely revolves around the Irish poet-playwright’s final days in France and Italy. Once the toast of London, Wilde has been deserted by all but a few diehard friends. Some, like Reggie Turner (Firth) and Robbie Ross (Thomas) generally cared for him and looked after him as best they could, which considering Wilde’s penchant for hedonism was no easy task. There was also Lord Alfred “Bosie” Douglas (Morgan), the young man whose affair with Wilde ended up being what got Wilde jailed. He is portrayed here as a selfish, childish and arrogant prick who treats Wilde like garbage, but whom Wilde still loved passionately. That, sadly, is not an unusual story; I think we’ve all known somebody who was flinded by their love for someone who was completely toxic.

The cinematography here is lush and nicely captures the gilded glory of an age in which austerity wasn’t a factor, not to mention the lovely countryside scenes in Europe. An elegiac score contributes to the overall melancholy tone. This is not a movie you’ll want to see when you need to be cheered up.

Yet, there is much to recommend it, starting first and foremost with Everett. His passion for the project is palpable throughout and his performance here is likely to be what he is remembered for. Clearly Wilde is someone who means something special to Everett and the care he puts into his every gesture and sad-eyed regret will haunt even the most jaded of filmgoers.

My one issue with the film is that it is told in a non-linear fashion and there are regular flashbacks. Unfortunately, it’s very difficult to tell if you’re seeing a flashback or not at times and it ends up being unnecessarily confusing. Some critics have complained that Everett doesn’t really educate the viewer in Wilde’s body of work, but I think he does something better; he inspires the viewer to want to research it on their own.

What happened to Oscar Wilde was a massive miscarriage of justice. Although he was pardoned posthumously along with tens of thousands of other men convicted of the crime of being “indecent with men,” he deserved to be lauded in his twilight years, not despised and spat upon. It is perhaps poetic justice that today he is remembered for being one of the greatest names in English literary history and an icon to the gay community, while those who tormented him are largely forgotten.

REASONS TO SEE: Strong performances throughout, particularly by Everett. Beautifully shot.
REASONS TO AVOID: Difficult to tell what was a flashback and what isn’t.
FAMILY VALUES: The film contains plenty of adult thematic content, sexual situations including graphic nudity, profanity, violence and some drug use.
TRIVIAL PURSUIT: When Oscar Wilde gets his hair cut at the beginning of his prison sentence, that’s Everett actually getting his hair cut. As this was one of the first scenes shot, leaving Everett nearly bald, he would wear a wig throughout most of the rest of the movie.
BEYOND THE THEATERS: Amazon, AppleTV, Fandango Now, Google Play, Redbox, Sling TV, Starz, Vudu
CRITICAL MASS: As of 1/24/20: Rotten Tomatoes: 72% positive reviews: Metacritic: 64/100
COMPARISON SHOPPING: Loving Vincent
FINAL RATING: 7.5/10
NEXT: THe Leisure Seeker