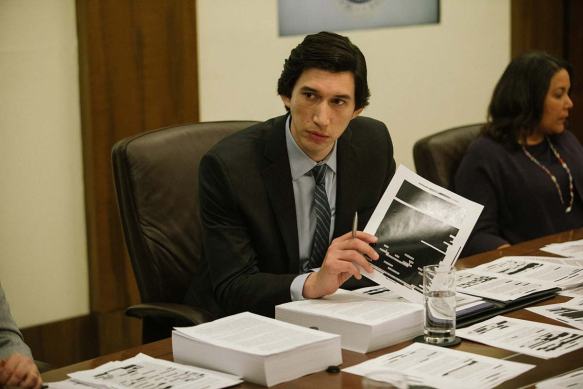 Going through millions of pages in government reports could turn anybody into Kylo Ren.

As Americans, we have always held ourselves to certain standards. We are strong, true and follow the law. We do the right thing. There came a time though, that our self-image took a pounding.

Young Daniel Jones (Driver) is ambitious, ready to keep America safe after 9/11. He was anxious to make a difference the best way he could – behind the scenes as a Congressional aide. When Senator Diane Feinstein (Bening) asks him to look into recordings of interrogations that the CIA had reportedly destroyed, he uncovered something terrible; evidence that the CIA was torturing prisoners for information.

Calling the effort “Enhanced Interrogation Techniques,” or EIT, the program was put in place by a pair of contractors with backgrounds in psychology and the military. Nobody seemed to be bothered by the fact that the two men had never conducted an interrogation before, or that evidence was strong that torture almost never yielded any actionable intelligence. The program went on and keeping it covered up seemed to be the main focus.

Jones and a small team of researchers worked in a basement office in a CIA satellite office for five years, working crazy hours going through more than six million pages of documents. Despite reluctance by the CIA and certain segments of Congress, Jones pressed and pressed until he uncovered the shocking truth.

The story is an important one, one that is especially relevant these days. Not every important story makes a good movie, however; much of what happened involved researchers sitting in front of a computer screen in a jail cell-like atmosphere. The dramatic tension here is not very strong. It doesn’t help that Burns doesn’t really develop Jones much as a character; we never see much of his personality except for that he’s driven and almost obsessive. He’s passionate about what he’s looking for and sometimes gets frustrated when others don’t share his outrage.

Bening and Driver are both outstanding actors and they don’t disappoint here. Driver is definitely in a much more different kind of role than we’re used to from him and it’s a good fit. I’m impressed by his versatility as an actor and he really stretches himself here. Bening is an actress who doesn’t always get the due she deserves; she probably won’t get a ton of accolades for her performance here but she really brings Feinstein’s personality to the forefront; that’s not surprising considering the two are friends in real life. Good casting is important in any cinematic endeavor.

I can see where those who are politically conservative might not like this much; the Conservatives don’t come up covered in glory here. Still, it’s an important story about how easy it is for the way to be lost, and how wanting to preserve our security can sometimes lead to compromising our soul. It’s a chilling tale and one that needs to be committed to memory.

REASONS TO SEE: A compelling story chilling in its implications. Strong performances by Driver and Bening.
REASONS TO AVOID: Overall the movie is a bit more underwhelming than the story deserves.
FAMILY VALUES: There are disturbing depictions of torture, violence, plenty of profanity and graphic nudity.
TRIVIAL PURSUIT: The real Daniel J. Jones attended the film’s world premiere at Sundance and received a standing ovation from the audience.
BEYOND THE THEATERS: Amazon
CRITICAL MASS: As of 12/6/19: Rotten Tomatoes: 83% positive reviews: Metacritic: 66/100
COMPARISON SHOPPING: Zero Dark Thirty
FINAL RATING: 7/10
NEXT: The Last Color