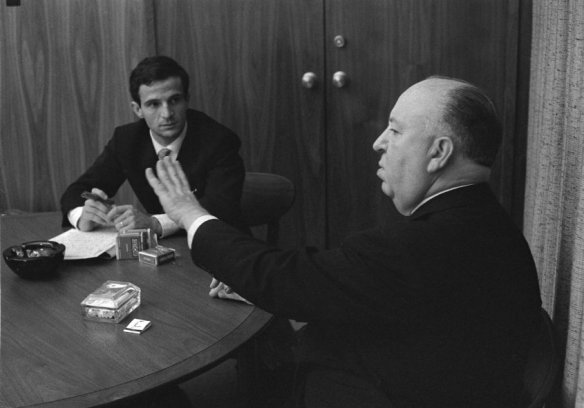 The man who is arguably the greatest director of all time frames a point like he frames a shot.

Greatness isn’t a title we’re allowed to proclaim for ourselves; it is rather bestowed upon us by those who follow in our footsteps. And, hopefully, an honor bestowed upon a favored few.

Certainly, Alfred Hitchcock and François Truffaut are worthy of such accolades. Hitchcock, once lauded as the Master of Suspense, was mainly relegated to the standing of a competent director of popular entertainment. It wasn’t until Nouvelle Vague darling Truffaut interviewed him and wrote a book about their conversation that Hitchcock began to be taken more seriously by film cognoscenti.

Much of the documentary is about the conversation between the two legends, with audiotape from the actual interviews that are augmented by film clips and commentary by ten modern directors who are clearly influenced by Hitchcock in particular. I don’t know that the commentary augments the book with much insight other than as to how Hitchcock has influenced modern movies, particularly in how carefully he framed and set up his shots. You might not know it from looking at him, but Hitch was a driven artist who labored intensely to make his vision come to life.

Much has been made of Hitchcock’s disdain for actors and in many ways he used them as living props. He was a visual storyteller more than anything, which makes sense considering he got his start in silent cinema. He worked with some of the great names in Hollywood – Cary Grant, Jimmy Stewart, Doris Day, Tony Perkins, Janet Leigh and so on – but for him, they meant little other than how they looked in the shot. He was a master storyteller however and he always got the best from his actors, no matter how much they personally disliked him.

The thing is though; I’m not sure why this documentary exists at all. The book that it is about is a landmark book that essentially provides readers with a Film Directing 101 course and continues to do so to this day. Anyone interested in going into movie production should make it required reading. But the question is what does this documentary give you that you couldn’t get from reading the book yourself?

The answer is not much. Sure some of the director commentary helps, and Jones – whose day job is as a film historian (he also has collaborated in the past with Scorsese, a well-known film buff) – provides some historical context to Hitchcock’s career. Some of the footage of his older films from the silent era and in England in the 30s was stuff I hadn’t seen. I wish there had been more of it.

Certainly there is plenty of interest here and if you haven’t read the book, this is a fine introduction to it. I read it back when I was in middle school and high school and my lifelong love of film was in part primed by it and other such tomes (The MGM Story, for example) for which I’m duly grateful. However, recommending this has to come with a codicil – read the book. If you have more than a passing interest in movies, you should read it anyway.

REASONS TO GO: Fascinating insights to some of his classics. Gives a great director his due.
REASONS TO STAY: Couldn’t ya just read the book? Glosses over most of his films other than Vertigo and Psycho.
FAMILY VALUES: Some images of violence as well as suggestive material.
TRIVIAL PURSUIT: The conversations, recorded on audiotape and partially on film, took place over a week in a conference room on the Universal lot in 1962.
CRITICAL MASS: As of 12/29/15: Rotten Tomatoes: 96% positive reviews. Metacritic: 79/100.
COMPARISON SHOPPING: Hitchcock
FINAL RATING: 6/10
NEXT: In the Heart of the Sea