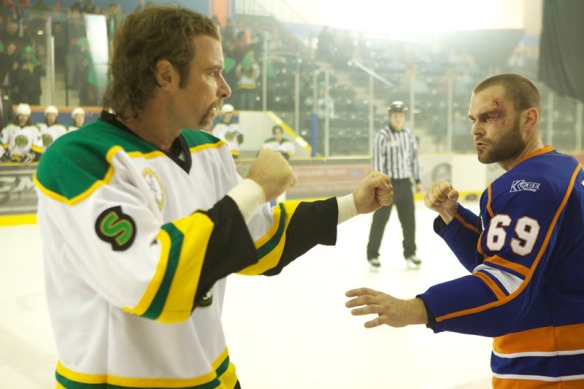 To those who know me, it’s no secret that ice hockey is my favorite sport. The grace, the speed, the skill appeals to me. Perhaps it is my half-Canadian heritage that instills the love of this great sport into my genetic make-up. Hockey, after all, is part of the Canadian DNA.

The flip side of the sport is the fighting. Goons, the vernacular for enforcers who are there to act as nuclear deterrents essentially, are the brawn of the sport. They rarely get the ink of the goal scorers but are as respected if not more so in the locker room of those teams they toil for and let’s face it, many fans love them more than the skill players.

Doug Klatt (Scott) is a bouncer in a New England bar whose father (Levy), a doctor, is disappointed in his son’s career direction and is not shy about expressing that disappointment. Doug’s best friend, Pat (Baruchel) is a hockey nut. While Doug and Pat are at a minor league game, Doug gives a beat down to a player who ventures into the stands. This catches the notice of an opposing coach who gives Doug a try-out even though Doug can’t skate.

Doug learns to skate and becomes an enforcer. After a few weeks he becomes a star goon in the league and is eventually promoted to Halifax to protect Xavier LaFlamme (Grondin), once a highly coveted prospect in the NHL whose game has deteriorated due to drug use, ego and attitude. Well, there’s that but also LaFlamme has also lost his nerve after being badly injured in a hit by Ross “the Boss” Rhea (Schreiber). Now the phenom avoids contact at nearly any cost. That generally doesn’t lead to a long career in the NHL.

Doug is a sweet guy at heart who has never really felt like he belonged to anything in his life, but now has found a purpose. He’s even attracted a girl, Eva (Pill) who is a self-described slut willing to give up her promiscuity for Doug. Things are going well for Doug  despite his father’s continued disapproval but you know that a confrontation with Rhea – who happens to be Doug’s idol – is inevitable.

Baruchel co-wrote this with Evan Goldberg, both of whom also co-wrote Superbad. This script really isn’t up to that level, being a bit more of a niche project, but it fills that niche admirably. Much of this is due to the performances of Schreiber and Scott. Schreiber plays an enforcer reaching the end of his career with a certain amount of cynicism, knowing that he has been exploited. Schreiber gives the character not only the toughness that such a character would naturally own but also with the intelligence and thoughtfulness that is a Schreiber trademark.

Scott’s character isn’t terribly bright and is socially awkward. He’s kind of an anti-Stiffler, not very confident with women and not terribly sharp. He tends to punch first and ask questions later. However, that doesn’t mean he isn’t basically a nice guy. Although there’s an enormous amount of gay slurs in the movie (reflecting a homophobic sensibility in sports in general not just hockey) Doug stands up for his gay brother Ira (Paetkau) as much as any good brother would.

This is the best hockey movie since Miracle and maybe since Slap Shot which it is more akin to and could be said to be the spiritual godfather to the film, although it is actually based on the memoirs of real-life minor hockey league goon Doug Smith. I do have issues with movies that glorify the violence in hockey – maybe I’m in the minority (and I don’t think I am) but I don’t love hockey for the fights but for the speed and grace of the game, the skills of the players and that the game hasn’t been overwhelmed by egos in the same way other major sports have.

Still, I was entertained by the movie and even though I will admit a bias towards the sport, I believe the movie will be entertaining even for those who aren’t particular fans of the game. I’m not sure it will make a lot of new fans of the sport but you never know. Game on.

WHY RENT THIS: One of the best hockey movies in recent years. Scott and Schreiber deliver strong performances.

WHY RENT SOMETHING ELSE: Goon-like players are becoming an endangered breed in modern hockey.

FAMILY VALUES: Lots and lots of swearing, plenty of hockey violence, some fairly strong sexual content and a bit of drug use.

NOTABLE HOME VIDEO EXTRAS: In Power Play Mode the viewer can access features and commentary enhancing what’s onscreen when the Power Play icon is onscreen. There’s also an HDNet featurette, a bloopers reel and a sit-down interview with Scott and Baruchel. There’s also some video hockey cards featuring characters from the film.

NEXT: Back to the Future