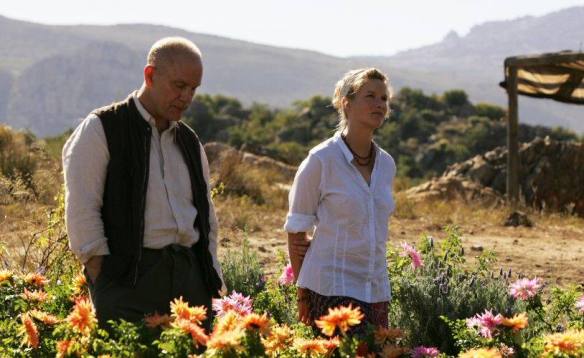 An awkward silence ensues after John Malkovich asks Jessica Haines for a loan.

The consequences of our actions are utterly and completely our own – at least, most of the time. When we perform actions that beget disastrous consequences, then we fall into disgrace.

David Lurie (Malkovich) is a professor of Romantic literature at a university in Capetown, South Africa. He is an arrogant man who teaches poetry without really understanding it. Middle aged, he is divorced and estranged from his family, and spends much of his time taking up with black prostitutes. When he engages in an affair with a mixed race student (Engel) of his, he is found out and brought before a disciplinary board.

However, he refuses to defend himself for, by his lights, following his natural instincts. Given no other option, the board dismisses Lurie, which surprises and shocks him – he fully expected to escape sanction of any kind. His career ruined, he finds sanctuary on his daughter’s farm.

Lucy (Haines) is a lesbian who grows organic crops and takes care of dogs in a rugged part of the country. She is assisted by Petrus (Ebouaney), who does most of the heavy lifting and whom David develops an immediate distrust for. He tells Lucy he doesn’t think she’s safe on the farm with Petrus around.

In the meantime, he helps out the local vet with performing euthanasia on dogs. It’s the only job he can really get. He is actually beginning to put his life back together – until something horrible happens, something that will test his limits as much as anything else in his life to that point had.

Aussie filmmaker Jacobs has taken an award-winning novel from South African writer J.M. Coetzee and turned it into a stark, unyielding look at hubris. The landscapes here are soulless and colorless, from the muted colors of the university to the desolation of the countryside of the Eastern Cape.

Lurie is much like that, only reversed – his desolation is on the inside. Outwardly, he can quote the flowery poetry of Byron, whom he most identifies with – but inwardly he doesn’t understand it, is incapable of it. Or, if he is capable, chooses not to because of his own hubris.

Malkovich does a stellar job as Lurie. While his Afrikaner accent has a tendency to slip now and again, he captures the essence of Lurie in his granite façade, his opinionated stare. This is not a very nice man, and bad things happen to him, much of which is of his own device. Haines does a pretty good job in support of Malkovich. She manages to stand up beside him without being overpowered by him. That’s no easy task, as many actors can attest.

Although I’m not familiar with the source material, I understand that Coetzee’s original work was taken as a political allegory about the status of the white male in the changing South African society. I don’t get that as much from the movie, which seems to be more of a morality play about hubris and pride. There are allusions to Biblical wrath of God type of stuff happening to David Lurie, although unlike Job he brought many of his troubles on himself and in doing so, brought them upon others.

There is a lot going on in this movie and nearly all of it is under the surface. That does make for a pretty solid workout in the mental gym, which is not what the general moviegoing public is necessarily after. Unfortunately, I’m not exactly sure if I caught the nuances I needed to; they may have been more subtle than I’m used to, or else I just missed them entirely. In any case, this is a very solid movie that is going to provoke some thought and maybe even a little debate. What’s it all about? Probably not what I think it is; but I’m probably not wrong either.

WHY RENT THIS: A powerful performance by Malkovich is framed by a stark cinematic shell.

WHY RENT SOMETHING ELSE: The violence is sudden and ferocious and might put off some.

FAMILY VALUES: The film went unrated, but there were some scenes of sudden and terrifying violence, including a rape. There is also some very adult themes as well as some very adult language.

TRIVIAL PURSUIT: Director Steve Jacobs is married to Anna Maria Monticelli, who adapted the J.M. Coetzee novel into a screenplay.

BOX OFFICE PERFORMANCE: $2.1M on an unreported production budget; my guess is that the movie just about broke even.