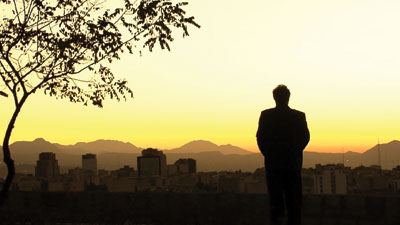 Since the revolution in Iran deposed the Shah and brought the Ayatollah Khomeini to power, Iran has existed as an Islamic fundamentalist theocracy, its laws deriving from the Sharia law of the Koran. Moral police enforce the laws, harassing women who are wearing lipstick, or young men for wearing t-shirts that display messages friendly to the West.

The Iranian population is the youngest on the average on Earth, with two thirds of the population under thirty. These young people have grown up indoctrinated by the mullahs and ayatollahs as to the rightness of Islamic law. They have also grown up seeing American television on clandestine broadcasts, showing them the freedoms available elsewhere and many yearn for the same thing for themselves.

Massoud (Taslimi) copes with this yearning by drinking himself into a stupor day after day on black market liquor (alcohol is forbidden in Islam), often imported from America or the notorious home brewed “Dog Sweat.” His indolent life comes to a screeching halt when his mother is seriously injured in a car accident, her neck broken as well as other terrible injuries. She is brought to a hospital which is overcrowded and by our standards, primitive. She gradually slips away and Massoud becomes enraged with what he sees his country’s decline.

Hooshang (Akbarzadeh) and Homan (Zamani) are the best of friends, inseparable. They work out at the gym together, horseplay in their swimming pool and hang out at cafes. And while it is never stated overtly, it seems pretty likely they are gay which is also forbidden – in fact, it is so forbidden it doesn’t legally “exist” in Iran. Their parents are most eager to get them married off. Many gay men in Iran are faced with similar choices – to exist as “bachelors,” unwed and severely limited in their activities, or to have some freedoms as married men and fathers. When Hooshang is paired with a bride, the relationship with Homan is put into doubt.

His bride is Mahsa (actress uncredited), who yearns to be a pop singer which is also forbidden in Iran – women cannot sing solo. Still, she cuts a demo in a friend’s studio and proves to be quite talented. She gets some interest but now a respectable married woman she must decide whether to risk her standing or pursue her dream.

Kate (actress uncredited) is a self-proclaimed feminist who is having an affair with a married man – a man who happens to be married to her cousin. Her brother Dawood (Forohar) is recently returned from studying at an American university and he becomes enamored with Kate’s friend Katherine (actress uncredited). The two decide they want to take their relationship farther but finding a place to do it is difficult at best so they walk the streets of Teheran endlessly, waiting for their chance for privacy and intimacy.

In the meantime Kate is also being pursued by Bijan (actor uncredited) in a creepy stalker-like way. She is left with the choice of a life of sexual encounters with a man she loves but cannot have, or the freedom of being a married woman with a man she doesn’t love.

Such is life in Iran. I found the glimpse fascinating. Much like life in any totalitarian regime, people find a way to live their lives, looking for back alley ways to get the things they want and need to bypass the authorities. There is the ever-present specter of the harsh punishment for violators, including imprisonment and execution for certain offenses.

The filmmakers had to shoot this guerilla style, sometimes without the knowledge of authorities and sometimes with forged permits. The result gives us a look at the everyday Iranian, free of government propaganda about how moral the society is. Some might find it more moral than our own in many ways, but people have their own moralities; some find drinking, smoking, dancing and fornicating to be perfectly acceptable by their own moral compass. All right, most do.

There were plenty of logistical difficulties in making this film. For one thing, they could only make it in small doses, forcing some actors to drop out as they became more nervous about their involvement in it being discovered. This leads to some storylines feeling hurried and ending abruptly.

There’s a great scene when Kate and Dawood’s mother finds a condom on the floor. She assumes it’s Dawood’s and asks him when he’s going to bring his girlfriend home, and seems pleased that her son is interested in someone. When he responds that the condom isn’t his, she goes into Kate’s room and has a screaming match, calling her daughter all sorts of names and slapping her face until Dawood intervenes and says he was mistaken, that the condom is really his. It seems that some things aren’t so different in their society as ours, eh?

While this is an ensemble-style drama, the storylines for the most part don’t intersect. While Keshavarz does an admirable job of giving all of the stories equal time and attention, some are more successfully told than others – an occupational hazard for this kind of storytelling. Still, this is worth checking out if for no other reason to see how the other half lives – and how things could easily be here were fundamentalist religious sorts in charge.

REASONS TO GO: A rare glimpse of everyday life in Teheran and the challenges that face the people living in a fundamentalist theocracy.

REASONS TO STAY: Some of the story lines meander a bit and end abruptly.

FAMILY VALUES: A good deal of sexuality (although nothing overt), smoking and drinking, some violence and adult themes.

TRIVIAL PURSUIT: The movie was filmed on location in Teheran, usually clandestinely and often with forged permits. The actresses mainly wore wigs when filming scenes without their shawls in order to keep their heads covered per Islamic tradition and Iranian law.

HOME OR THEATER: Some of the images of Teheran deserve a big screen viewing.

Day 5 of the Festival turned out to be a no-show on our part as Da Queen and I had to attend to personal business that kept us away from the Festival. So it was back to the Festival for Day 6 where we shifted out focus to the Enzian, where we caught Dog Sweat, a look at modern Iran and the day to day lives of Iranians in Teheran, as well as The Happy Poet, a kind of sardonic low-key comedy about a young man who tries to operate a healthy food cart in Austin. Both were terrific movies well worth the time to check them out. We also stayed and enjoyed the Animated Shorts program, which included some new work from Bill Plympton and Lev Yilmaz, as well as an astonishing short called The Fantastic Flying Books of Mr. Morris Lessmore which may sound a bit like a psychedelic album title but is to my mind a legitimate Oscar contender.

Tomorrow is a bit up in the air in a lot of ways; we may attend the filmmaker’s party but we may also attend The People vs. George Lucas instead. We also have a yen to attend Without at the Regal at 9pm. We’re headed into the home stretch of the festival and there are plenty of fine movies still that we have yet to see; if you haven’t dropped by yet, don’t miss out – just because you don’t see the ads of these movies on TV or hear about them on “Entertainment Tonight” doesn’t mean you won’t find them to be absolutely riveting. Go outside of your comfort zone – you might find your point of view changing before your very eyes!