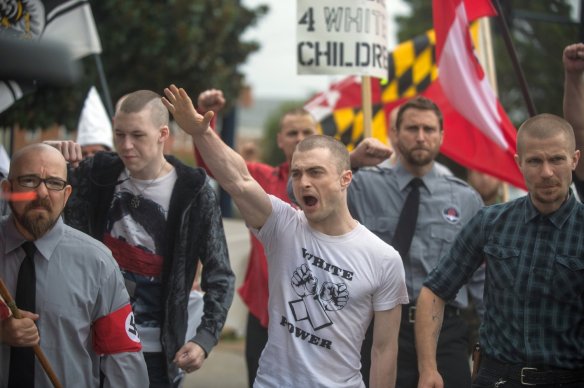 A bunch of knuckleheads…I mean, skinheads.

The underbelly of a nation – any nation – is often ugly. The white supremacist movement is part of our own underbelly, like it or not. It is a movement based on fear; fear of anything different, but also of inspiring fear in others. I can’t think of any ethnic American who would be happy to be cornered by a pack of white supremacists. This is a sub-strata of Americans in which violence is always lurking close to the surface.

When some chemicals that could be used in the making of a dirty bomb go missing, the initial thought at the FBI is that it is the usual suspects – Islamic extremists – who are behind it. However, gum-chewing agent Angela Zamparo (Collette) has an idea it might be something more homegrown – white supremacists – who might be behind the theft. She doesn’t really have the support of her superiors but she is just convincing enough to have an undercover operation authorized. To pull it off, she doesn’t get the usual veteran field agent but instead an analyst named Nate Foster (Radcliffe) who has no undercover experience whatsoever.

Going undercover with a backstory of being a Black Ops Marine who is tired of seeing his country overrun by the same sorts he was fighting in the Middle East, Foster infiltrates the various strata of white supremacist culture starting with the violent and impulsive skinheads (whom he cleverly stops from assaulting an interracial couple) to the more organized militia types who have camps set up in rural locations and have some big plans. But it is the big fish that Foster is after. He starts with radio host and author Dallas Wolf (Letts) who is on a book tour to promote his hate-filled opus Genocide: The Death of White America. In turn this leads to Gerry Conway (Trammell), a soft-spoken family man who hosts barbecues, is a vegetarian, adores classical music and almost reasonably espouses a race war that would lead to the whites taking back America. His is the most chilling villain of all; the true believer. But do the white supremacists have the chemical? And if so, what do they intend to do with it?

The film takes a little while to get going but once it does, it is a pretty strong crime drama. While the premise reeks of TV cop drama, the fact that it is based on true events lends authenticity generally absent on the small screen.

The elephant in the room needs to be tackled first of all. Radcliffe is not the most imposing physical specimen in the world and he’s cast as a kind of mousy FBI analyst, which works but when he gets a backstory of being a badass ex-Marine it kinda doesn’t. Some have snarked about Radcliffe’s Harry Potter past and how it could be construed that enterprising true life white supremacist groups could cut and paste a video in which kids could be indoctrinated into thinking that Radcliffe himself believes this garbage which is absolute malarkey. Just because, say, Pierce Brosnan has played some characters with repugnant personal beliefs does it mean that anyone believes that James Bond is repugnant even if you edit all of the footage together.

Still, as the film went on, I found myself drawn into Radcliffe’s performance and after seeing him this year as a farting corpse in Swiss Army Man and in the last few years in a variety of roles I’ve come to the conclusion that not only is he a versatile actor but also a fearless one. Nate gets out of situations not so much by physical means but more by his wits; which makes the character much more believable. While the story has essentially been done before, the way it is presented here is pretty much unique.

There are a lot of racial epithets strewn about here and that might make some viewers uncomfortable although after awhile you do become kind of numb to it. The thing about hate speech is that if you hear it long enough you begin to realize how pointless it really is and you just kind of tune it out. I wonder what that says about us as a society?

The FBI is portrayed as a bureaucratic mess here with low level management attempting to carve out their own little niche and taking out any who aren’t with their own program, even if it means ignoring an entire line of investigation. I suppose that there is some truth to that in some cases but it is hard to believe that a law enforcement agency that has really kept domestic terrorism to a bare minimum is quite that dysfunctional. Of course, that’s more my observation and is not based on anything empirical; I’m not familiar with the inner workings of the FBI and the writers had access to at least one person who was.

In any case, this is a disturbing, powerful movie that reminds us that some of the most dangerous terrorists in the country aren’t wearing burkas or quote the Quran. Those who are primed to think that all of our troubles come from without (and I’m looking at you Trump supporter) may be well-advised to look again. This isn’t a movie that will resonate with everyone, but it is a disquieting look at a strata of our society that is out there – and has plans.

REASONS TO GO: The last half of the movie is powerful and suspenseful. The soundtrack is terrific. Radcliffe delivers an unexpected performance.
REASONS TO STAY: The film takes awhile to get going. The bureaucracy of the FBI portrayed here may be frustrating for some.
FAMILY VALUES:  A whole lot of swearing going on.
TRIVIAL PURSUIT:  The film is inspired by the real-life story of FBI agent Michael German who contributed to the writing of the script.
BEYOND THE THEATER: Amazon, iTunes
CRITICAL MASS: As of 9/10/16: Rotten Tomatoes: 86% positive reviews. Metacritic: 71/100.
COMPARISON SHOPPING: Betrayed
FINAL RATING: 7/10
NEXT: Pete’s Dragon (2016)