Happy McBride (right) wonders what the blue plate special is.

Fighting – whether it be traditional boxing, MMA or other forms of modern gladiators – is often defined publicly by he superstars but there are many levels of professionals in between the bottom and the top. Getting from the former to the latter is no easy task and can often be as brutal as what happens in the ring.

Matt (Hug) is a fresh-faced and somewhat naïve young wanna-be who has some talent but is going nowhere. He wants to enlist the aid of former champion Happy McBride (Bernhardt) as a manager, but Hap is not terribly interested. He has career aspirations of his own although he is perfectly happy to take all of Matt’s money and deliver him into a fight he can’t possibly win against a man much bigger than himself. Happy also owes money to people you really don’t want to owe money to.

Matt manages to appeal to Happy’s better nature and Happy reluctantly gets him a fight that is within his weight class. Matt turns out to have a whole lot more than some talent and eventually gets the attention of Happy’s former manager Larry (Finney) who thinks he can take the kid places, leading to some jealousy on the part of McBride. Matt’s overbearing dad (England) also shows up, convinced that his son should be a doctor (Matt left med school to take up fighting) and to complicate things further, Matt has fallen in love with Nikki (Staller) who is Happy’s daughter. Happy can’t help but like Matt more or less but the two could well be on a collision course as their dreams of clawing their way to the top almost inevitably go through each other.

In many ways this is a typical MMA/boxing drama with the kind of elements that are fairly traditional in the genre; a down on his luck fighter taking a younger man under his wing, a checkered past for the older man, an ill-advised romance for the younger man and stardom getting in the way of what might have been a fine mentor relationship. You won’t find a lot of surprises plot-wise here, although there is a very good scene in which father and daughter talk about the mother’s mental illness rather frankly.

The fighting scenes are actually pretty well staged and the action is kinetic. Mutarevic shows some promise as an action movie direction; certainly he understands what constitutes a good action scene. However, the performances of the actors with a few exceptions are fairly wooden, which isn’t necessarily their fault. The dialogue doesn’t always sound the way real people talk and occasionally you get the sense the actors are trying their best to figure out how to make what they’re saying sound natural and not managing to do so.

Staller is pretty and she has some good chemistry with Hug but at times she has a strange accent that sounds almost Eastern European and it is jarring since her onscreen father doesn’t have one. I don’t know if the actress has a natural accent or was trying to put one on but either way, it was jarring and distracting.

Bernhardt however delivered a nice performance as Happy. The character does some really crappy things to those around him, but it’s hard not to root for him. Bernhardt plays him as a charming Irish rogue  and that’s the perfect choice for the character (it helps that Bernhardt wrote the screenplay). I’ve seen plenty of movies in which very competent actors can’t pull off that kind of role, so kudos to Bernhardt for making it look easy.

The movie’s strengths and flaws just about even out in the end. I can’t really give this an unreserved recommendation because of the non-action sequences but I can give it a mild recommendation due to the action sequences. Of course, there’s always the fast forward button for those who don’t want to sit through one to get to the other.

REASONS TO GO: The fight sequences are pretty well staged.
REASONS TO STAY: Some of the performances are a little bit stiff.
FAMILY VALUES: There is some profanity, a fair amount of MMA violence and some sexual references.
TRIVIAL PURSUIT:  Seya Hug is the son of professional Kickboxer Andy Hug.
BEYOND THE THEATER: Fandango Now
CRITICAL MASS: As of 11/28/18: Rotten Tomatoes: No score yet. Metacritic: No score yet.
COMPARISON SHOPPING: Rocky
FINAL RATING: 5/10
NEXT: Driver X 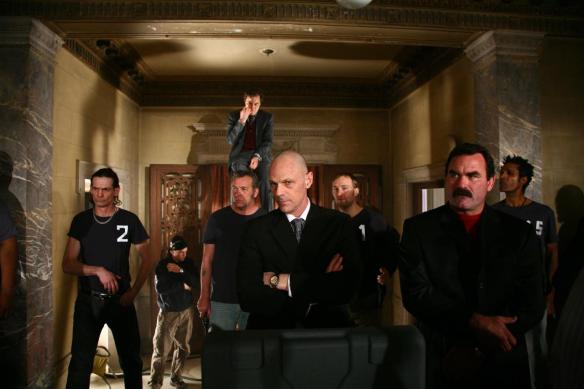 This is one gun club you don’t want to be a member of.

Some movies shouldn’t be remade by Hollywood. Not because the original is perfect as it was, but because there is a misunderstanding by Hollywood sorts of why the movie worked in the first place. That gets clouded when the director of the original also directs the remake.

13 Tzameti is not the perfect movie but it is a very good one. A French production set in France and in Georgia (the Russian one), it tells its story in black and white, lending a gritty quality that is largely absent here. While the story is nearly identical here, it is more fleshed out not only in backstory but also in palette – this movie is in color, which isn’t necessarily a good thing.

Vince Ferro (Riley) is a down on his luck laborer with a good heart. He is desperately in need of money – a lot of it – but the prospects of that are slim given his skill sets in life. While doing a job, one of the residents of the home he’s working in dies of a drug overdose. He overhears talk that the dead man was going to start a job that paid extraordinarily well. There are instructions for the job in an envelope which Vince, figuring the deceased wouldn’t need anymore, takes for himself.

He ends up taking a train to Chicago and is driven from there to a secluded dilapidated house where he is ordered to strip. His boot heels are cut off as the organizers look for electronic devices. To Vince’s horror, he is issued a gun and a single bullet, and a shirt with the number 13 on it. Other men, with other numbers on their shirts are also issued the same. They are made to stand in a circle and to load the gun with the bullet. The participants then spin the chambers until they are told to stop. They all aim the gun at the head of the man ahead of them. When a light bulb goes on, the master of ceremonies (Shannon) tells them, they are to pull the trigger. Those that don’t will be shot. Ferro is reluctant but knowing he will be killed for certain if he doesn’t, he participates.

All this is done for the entertainment of a group of wealthy men, who bet heavily on the outcome of each round. Each of the participants has a wealthy sponsor, in Ferro’s case an elderly man (Gazzara) and in Bagges’ case his own brother Jasper (Statham). Should Ferro survive he will get a healthy payday, one that will allow him to live in luxury the rest of his life. But the odds are long, a dogged police detective (Zayas) is getting closer to busting the game and even if Ferro wins he will have to be on his toes to escape both the vengeful Jasper and the cops.

The newer movie is much more detailed than the first which took place more in the immediate moment which added to the overall tension. Here we get more of the backstory to the various characters, both the participants in the game and the rich men betting on it. It also must be said that in some ways this is a better looking movie, although in the end result I don’t think that the gloss did the film any favors. The original succeeded largely because of its grim noir-ish look and because we are so locked into the horror of the situation we don’t have time to think of anything else.

Certainly the acting is better here and there’s something to be said for that. However, with all the added backstory the movie tends to take detours that we really don’t want to be on. While the suspense is still relatively high, it still doesn’t compete with the first movie in that department.

So it’s safe to say that this is one of those movies that is a lot better if you see it before seeing the movie it’s based on. If you see 13 Tzameti first this will suffer a great deal by comparison. In that sense, maybe having the same director worked against this film; he was given a bigger budget and name actors like Statham, Rourke and Winstone. Of course he’d want to make a bigger movie. However in this case, bigger isn’t better.

WHY RENT THIS: Gut-wrenching suspense. Makes a nice companion piece to the original.

WHY RENT SOMETHING ELSE: Doesn’t always hold up to the original. Meanders a bit. Needs more grit and less gloss.

FAMILY VALUES: Some fairly disturbing violence, a bit of foul language and some brief drug use.

TRIVIAL PURSUIT: Ray Liotta was originally cast in the part of Detective Mullane but had to bow out due to a scheduling conflict; David Zayas ended up in the role.