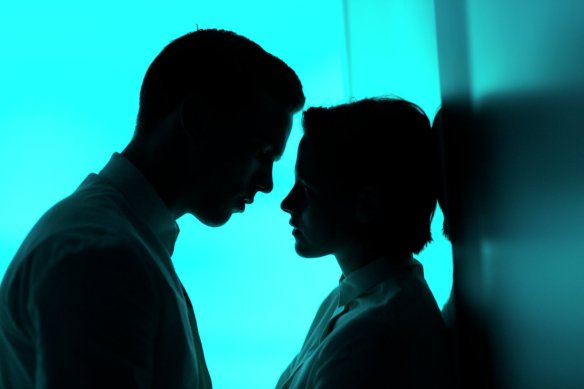 Nicholas Hoult and Kristen Stewart have the blues.

We are creatures of the heart and the mind. We use our feelings nearly as much if not more than our logic. That often gets us into trouble, both on a personal basis and as a species. Some say that much of the conflict we experience is an effect of the heart, not the mind. These same people think we would be much better if we could switch our emotions off.

In a post-Apocalyptic future, that is precisely what has happened. Silas (Hoult) lives in a park-like city of glass and chrome and emotions have essentially been eliminated at a DNA level – well, sort of. People have to take a regimen of inhibitors to keep their feelings suppressed which at some point stop working. When that happens, people develop something called Switched Off Syndrome – yes, S.O.S. Silas is in the early stages of that. There is no cure and those who get to the latter stages of the disease are generally shipped off to The Den, where they undergo rehabilitation but apparently nobody ever returns from it. S.O.S. is essentially then a death sentence.

Silas works at an electronic publishing firm which seems to specialize in fiction and non-fiction about interstellar colonization. One of his co-workers is Nia (Stewart) who clearly is having some issues coming to grips with her emotions – literally. She clenches her fists and plays with her hair whenever some sort of feeling overtakes her. Their co-workers are too polite to mention anything but they certainly notice. Silas has also noticed Nia but for far different reasons; he notices the sensuality of her lips, the softness of her hair, the curve of her neck.

In this highly ordered society where everyone dresses in white (except for law enforcement which predictably wears black), love is not only discouraged but illegal (they never get into how people reproduce in this environment). And of course, that’s just what Nia and Silas fall in. They begin engaging in sexual relations, also highly forbidden. Silas has been attending a support group for S.O.S. sufferers and meets there a woman (Weaver) who gives him an alternative, albeit a dangerous one. Do he and Nia have the courage to see this through?

Emotionless dystopia-set films are nothing new. George Lucas established himself as a visionary filmmaker even before he explored a galaxy far, far away with THX-1138, which shares many of the visual elements with this film. You would hope then that this film would add something new to the sub-genre and in some ways it does; the film takes the point of view two people learning to feel things for the very first time and in some ways, it is all about the role emotions play in the human experience. Of course, that’s what most of these films are about so it’s not mining any new territory there either.

Fortunately the cast here is solid. Hoult is in the process of becoming an actor that I look forward to seeing in everything he does. He’s got lots of charisma not to mention a good deal of range; he plays comedy and drama equally well. Here he’s called upon to be cold and almost diffident, which isn’t necessarily a good thing. Stewart is an actress who isn’t the most expressive as actresses go, so this ends up being right in her wheelhouse. In response, she actually gives – quite ironically – one of her best performances ever. There’s no denying that she’s a beautiful woman and that beauty is used here as a weapon in the film’s arsenal; it’s easy to see why Silas would get interested.

The problem in portraying a society without emotions is that your movie can get kind of bland and colorless and the production design’s color palate – which is essentially variations of white – doesn’t help with that. While the future is beautiful in its own way, it’s also pretty boring. Yes, people talk about fairly high-brow subjects but at the end of the day however thought-provoking the conversation might be, it loses any meaning because there’s no emotional resonance. You might as well have a Macbook having a conversation with a Microsoft Surface Book. They might come up with some salient points but they also won’t be terribly relatable to who we are as people either.

REASONS TO GO: The visuals are very cool. Hoult has become one of my favorite actors and Stewart delivers her best performance yet.
REASONS TO STAY: Occasionally, it gets too high-brow for its own good. The film is so low-key and emotionless that it actually becomes bland in places.
FAMILY VALUES: Not only is there some sensuality and a bit of partial nudity, there’s also some adult thematic content and some disturbing images.
TRIVIAL PURSUIT: Weaver and Pearce previously starred together in Animal Kingdom.
BEYOND THE THEATER: Amazon
CRITICAL MASS: As of 8/8/16: Rotten Tomatoes: 32% positive reviews. Metacritic: 43/100.
COMPARISON SHOPPING: The Island
FINAL RATING: 6/10
NEXT: Tony Robbins: I Am Not Your Guru