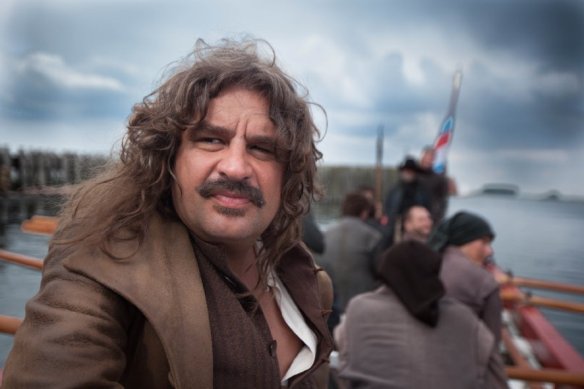 You’ve probably not heard of Michiel de Ruyter unless you were schooled in the Netherlands or are a European history buff, but you likely should have. One of the most revered figures in Dutch history, he was a naval genius who kept his country from being invaded on several occasions by the English and the French, and at a time when his country was in political turmoil he was a stabilizing figure whom many credit for keeping his nation from plunging into civil war during a turbulent era.

As the movie opens, the 20,000 ship Dutch navy is under the command of Maarten Tromp (Hauer) but during the Battle of Scheveningen he is mortally wounded, although he does succeed in repelling the English. While King Charles (Dance) schemes in England, new prime minister Johan de Witt (Atsma) knows that the Dutch Republic, already a government teetering on the edge of a possible civil war with the Orangists, a monarchist group that wants William of Orange (Weeber) to rule, needs an admiral to defend the Netherlands from the rapacious British and their allies of convenience the French.

He recruits de Ruyter (Lammers), a stocky and unlovely man who is more interested in retiring to the country with his wife Anna (Langelaar) and two daughters. However, he is also a deeply patriotic man and is convinced by de Witt and his brilliant brother Cornelis (Fernhout) that the sailor is desperately needed.

Time and time again de Ruyter uses brilliant naval tactics to stave off the Brits while court intrigue between the de Witt brothers and the Machiavellian Kievit (de Lint) keep the Netherlands in chaos. As the years pass, the monarchist party slowly begins to take the upper hand – but will that advantage come at the expense of the entire nation?

Los Angeles Times reviewer Robert Abele characterized the movie as a Michael Bay treatment of Dutch naval history and a more succinct summation of this film couldn’t be asked for. There is a good deal of large scale mayhem, with ships being hit by cannon fire, bodies flying in the air in all sorts of directions, splinters and wood dust coating everything. Some of the warfare sequences are pretty grisly, although not as much as the depiction of a historic lynching which ends up with various body parts being pulled out of the bodies of those possibly still conscious.

For most Americans, the history is going to be a bit vague. I doubt that the average American knows anything about the Anglo-Dutch War, let alone that there was more than one. Some of the stuff I learned here about the politics of Europe in the 17th century was fascinating; certainly, I never knew any of it which goes to show you how ignorant of history we Americans really are. Of course, I love this stuff and eat it up like candy but I’m sure those moviegoers who find history to be a bore will not have the same appreciation for it that I do.

War buffs will appreciate the naval strategy that is shown here, much of it innovative for its time. The rest of us may not be quite as appreciative of the overhead shots of the deployment of ships. However, film buffs will definitely be a little hosed that the CGI of the various fleets and the damage done to them is not very impressive; there are some very fine effects houses in Europe and certainly there could have been a better job done with the special effects.

The acting is very solid. Some of the finest actors in Europe appear here. While most in America are familiar with Hauer, de Lint and Lammers are two of Holland’s most respected actors. Lammers in particular does a good job with the stocky, somewhat awkward de Ruyter who was nonetheless beloved by those who sailed under him – his men nicknamed him ‘Grandfather,” a sign of affection and respect. Lammers physically captures the look of the man but also the indomitable spirit of one of the Netherlands’ greatest heroes.

The big problem here is that the movie is way too long. It is just over two hours long and captures 24 years in the life of de Ruyter but it feels like a good half hour could have been trimmed. There are only so many naval battle scenes you can take before they start to run together. Even with that there is some solid entertainment here that with a judicious pair of scissors and a little extra dough in the effects budget might have been a lot more.

REASONS TO GO: Pretty decent production values. Lammers and cast do fine work. Insights into Dutch history most of us are unaware of here in the States.
REASONS TO STAY: Way too freaking long. The score is annoying. Underwhelming CGI
FAMILY VALUES: War violence, a graphic and gruesome lynching scene, some foul language and some sensuality.
TRIVIAL PURSUIT: A special version of the film was created that was less gruesome in depicting several historical deaths so that schoolchildren in the Netherlands could view the film.
CRITICAL MASS: As of 3/22/16: Rotten Tomatoes: 60% positive reviews. Metacritic: No score yet.
COMPARISON SHOPPING: 300: Rise of an Empire
FINAL RATING: 5/10
NEXT: Whiskey Tango Foxtrot