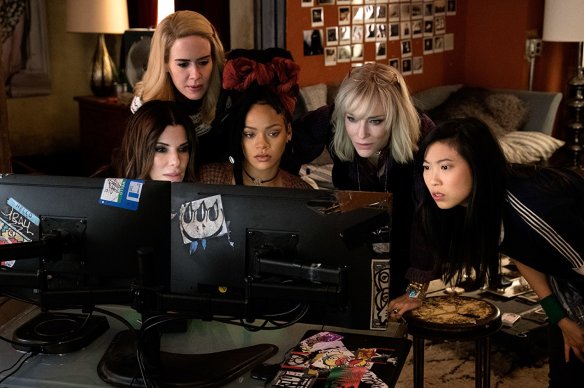 Sure, we need more films with empowered women doing what men do. The Ocean’s trilogy had an A-list all-star cast including George Clooney, Matt Damon, Brad Pitt, Bernie Mac and so on and so forth. Why should they have all the fun?

Indeed, this seemed like the perfect opportunity to prove that girls just wanna have fun too but the movie is sorely lacking in the presence of Steven Soderbergh, who wrote snappy dialogue, created a retro mood that recalled the Rat Pack that made the original Ocean’s 11 and let the men loose in Sin City – obviously the cast was having a great time with one another.

Sadly, this heist movie involving the theft of a fabulous Cartier diamond necklace from the equally fabulous Met Gala party annually hosted by Vogue’s Anna Wintour (who cameos as herself, one of a raft of cameos) fails to deliver the goods. As much as the Oceans trilogy felt like all involved were having a great time, this one feels like just another job. The bonding never feels authentic and the chemistry is sorely lacking. Like the distaff version of Ghostbusters back in 2016, the movie feels less of an ensemble and more of a collection of actresses. Don’t get me wrong – some of the sequences here are done with the kind of clever wit that the Oceans films are known for and the movie is entertaining in its own right and it makes some salient points about our celebrity-obsessed culture but it doesn’t hold up to any of its predecessors except maybe the least of the series, Oceans 13.

Part of the problem is that I think the expectations for a distaff version of an established and beloved franchise is that the movie will replicate the feel of the originals and that’s hard enough to do in the first place; throw in that the cast is going to be all-female in a fairly misogynistic society as we have and the movie has two strikes on it before it gets out of the gate. I think that thand their relationships I I think that the biggest mistake that was made here was that short shrift was given to the characters at the expense of a “sisters are doing it for themselves” empowerment narrative and sisters can do it for themselves as Wonder Woman and The Hunger Games have more than proven. It’s a pity that a cast this glittery left me so cold.

REASONS TO SEE: Some of the sequences are marvelous.
REASONS TO AVOID: Lacks the camaraderie of the first three films.
FAMILY VALUES: There is some profanity, drug use and sexually suggestive content.
TRIVIAL PURSUIT: Although Gould is the only actor from the first trilogy to appear in this film, scenes were filmed with Carl Reiner and Matt Damon but were both left on the cutting room floor.
BEYOND THE THEATERS: Amazon, Fandango Now, Google Play, iTunes, Microsoft, Movies Anywhere, Vudu
CRITICAL MASS: As of 6/12/19: Rotten Tomatoes: 69% positive reviews: Metacritic: 61/100.
COMPARISON SHOPPING: Bandits
FINAL RATING: 6.5/10
NEXT: Bob Fosse: It’s Showtime!