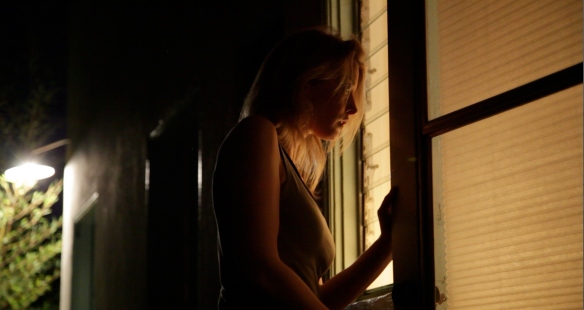 On the outside looking in.

Some movies are better the less you know about them beforehand and this is one of them. If you’re planning to see this anytime soon, read no further. If you have seen it and want a different opinion to bounce off of, read on.

The comet’s proximity messes up cell service and actually causes some of the phones to crack their screens spontaneously – why? Someone with a better grasp of physics might explain this one because I can’t. Anyway, soon the power is disrupted and the partiers begin to grow concerned. There is only one house in the neighborhood with lights on and Hugh and Amir volunteer to venture forth and see if  they can use the land line to contact Hugh’s brother, a scientist who specializes in…um, comet phenomena.

Anyway that’s when things begin to get weird. I don’t want to go into it too much because frankly I don’t think I have the brain capacity to explain this properly without  A), messing up the synopsis and B), having my brain explode. Suffice to say that we’re talking some theoretical quantum physics here that the writers seem to have a better grasp of than I ever could.

So what’s to love? Plenty. This is a smart concept, utilizing Schrodinger’s Cat and quantum physics in ways I’ve never seen done in a movie before that didn’t have “Property of Cal Tech” stamped on the disc cover. The writers do manage to explain things fairly clearly so even those of us who didn’t take quantum mechanics back in the day should be able to follow along pretty easily. Clearly the writers have at least a familiarity with the science and that’s kind of refreshing in an era when “dumb (and dumber) is better.”

The acting is pretty sharp with Buffy, the Vampire Slayer‘s Brendon showing some pretty nice chops in a most un-Xander-like role. Foxler, the female lead, reminds me a lot of Elizabeth Olsen and has the potential to become a big star somewhere down the line.

This isn’t a big budget production by any stretch of the imagination. Nearly all the action takes place in a single room and when they do go outside to view the comet it looks realistic enough. This is an example of how you can make a good science fiction film without a big Hollywood budget.

What’s not to love? Well, these are some of the most shallow characters you’re ever going to run into in a film. A friend of mine claims that grounds the film but if I wouldn’t want to spend a moment with any of these characters if they were real, why would I want to spend an hour and a half of my time watching a movie about them? They represent all the things the rest of the country hates about L.A. with wanna-be actors and ballerinas mixing with herbal Earth mamas and talking about Feng Shui and juice cleanses. It’s enough to make you crave an enema after the movie’s over.

I also wasn’t fond of the jump cutting and blackouts that make the film feel choppy. I get that the director is trying to make the viewer feel that something is out of kilter, but it gets old after only a few times it happens and he does it throughout the movie. There’s nothing wrong with trying to do things differently but this was something he should have utilized a little more sparingly. Trust your actor and your story to set the mood.

I wasn’t a big fan of the ending either but to go into it in any length would be to give away too much. Let’s just say that Em doesn’t seem the type to do what she does and I don’t think having a comet pass hundreds of miles away from the Earth is liable to make people behave the way they do here. Nor do I think it would cause an event of this dimension and scope. If you’re going to use physics, at least have the decency to use real world physics consistently. Neil deGrasse Tyson would have a field day with this.

It’s definitely fascinating and hopefully if you’ve read this far you’ve already checked it out. I would recommend it to anyone seeking smart science fiction with the caveat that the characters might just drive you to ask for a Joss Whedon rewrite.

REASONS TO GO: Fascinating and smart concept. Taut and paranoia-infused.
REASONS TO STAY: Often confusing. Characters so shallow you want to scream.
FAMILY VALUES:  There’s a smattering of foul language and a scene of violence.
TRIVIAL PURSUIT: Elizabeth Gracen won the 1982 Miss America title. Lorene Scafaria directed the apocalyptic comedy Seeking a Friend for the End of the World.
CRITICAL MASS: As of 9/3/14: Rotten Tomatoes: 84% positive reviews. Metacritic: 64/100.
COMPARISON SHOPPING: Plus One
FINAL RATING: 7.5/10
NEXT: Weather Girl