Just sitting on a park bench chatting with Death; nothing crazy going on here…

We all deal with grief in different ways. Some of us pour ourselves into our work; others lose all focus. Some of us rage against the universe; others try to find something constructive to do, such as create or work for a charity. Sooner or later however all of us must deal with the loss of a loved one.

Howard (Smith) is doing just that. His beloved daughter has passed away and now, two years later, the successful advertising agency he built is floundering, losing clients left and right because Howard, their main creative force, just doesn’t care anymore. His best friends all work at the company; Whit (Norton), who co-founded the company with him, Claire (Winslet) who has given up marriage and children to give her full focus on the company and Simon (Peña), the numbers man.

There is an offer on the table to buy the company but Howard won’t even consider it. All of the principals stand to lose everything if they can’t salvage the situation and the window of opportunity is rapidly closing. Whit, Claire and Simon, desperate to understand what’s going on with Howard, hire a private detective (Dowd) to figure out what their friend is doing. Nothing much; mainly building domino constructions, biking back and forth from work and writing letters.

The latter is kind of the peculiar part; they’re not letters to people but to things; concepts, really. He’s been writing to Love, Death and Time. The three partners hit upon an idea that, well, never would have occurred to me; to hire three unemployed actors that Whit has found who can play the parts of Love, Death and Time who will personally answer Howard’s letters. They’re not really hoping that this performance will bring Howard back but the detective can film Howard talking to them (yelling at them really) and then digitally remove the three actors so that Howard can be proven incompetent and the sale go through without him.

The actors that Whit recruits – Brigitte (Mirren) who plays Death, Amy (Knightley) who plays Love (now, that I can believe) and Raffi (Lattimore) who plays Time each begin to spend time with one of the partners – Brigitte with Simon, Amy with Whit and Raffi with Claire – and end up helping them with their own problems. In the meantime, Howard has started attending a support group for grieving parents run by the lovely Madeleine (Harris) and looks like he might finally be emerging from his shell. But will it be in time to save everything he’s built, including his friendships?

If the plot summary sounded implausible that’s pretty much because it is. I can’t imagine “friends” doing something that awful to a friend, and the movie portrays them as genuinely concerned for Howard’s well-being. I can’t really reconcile the actions of concocting an elaborate scam to prove their friend incompetent (which has other ramifications beyond the sale of his company) with all the mea culpa chest-beating about what a great guy Howard is and how much they “miss” the old Howard. I mean, friends just don’t do that.

The cast is one of the best you’ll see gathered in a single movie with a couple of Oscar winners and four nominees. None of them will be adding to their nomination total here but the performances are nonetheless solid. Peña caught my attention for a very emotional performance as a family man facing a terrible crisis of his own, and Smith who is the main performance in what is essentially an ensemble cast gets to keep everything in until the last scene in which he unleashes some of his best acting of his career.

That ending however contains a twist so unbelievable that at that point most people are just going to throw their hands up in the air and give up on the movie, and I can’t blame them. However, if you do as I do and just enjoy the ride rather than try to make sense of things, you’ll be far happier.

Now as you can tell the critical response has been harsh. Keep in mind however that most professional critics don’t like being emotionally manipulated and films that do that tend to get harsh scores. In that sense, critics can’t be trusted with films like this. You really have to go and experience it on your own and judge for yourself. You, after all, may not mind being having your emotions manipulated. Maybe you need it. I do, sometimes. Sometimes I need the release of a good cry. Catharsis makes us all emotionally healthier after all.

REASONS TO GO: Strong performances throughout, particularly by Peña and Smith. The premise is at least intriguing.
REASONS TO STAY: Many of the plot twists are telegraphed. The ending is a bit preposterous.
FAMILY VALUES: There is a little bit of profanity but mostly the themes are pretty adult in nature.
TRIVIAL PURSUIT: Winslet, Mirren and Smith were all nominated for Oscars in 2007, although only Mirren was victorious.
CRITICAL MASS: As of 1/7/17: Rotten Tomatoes: 12% positive reviews. Metacritic: 24/100.
COMPARISON SHOPPING: Meet Joe Black
FINAL RATING: 6/10
NEXT: The True Memoirs of an International Assassin 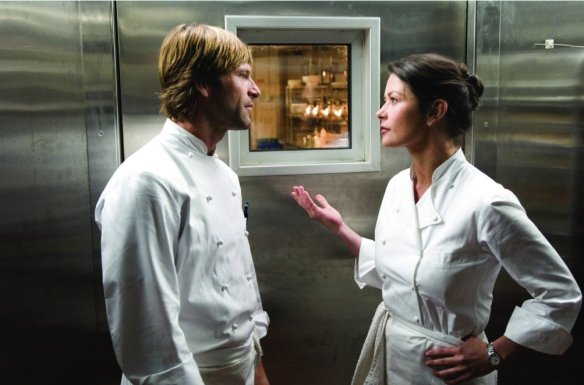 Sparks can fly in the kitchen.

The great chefs are control freaks; they set high standards and expect all those who work for them to meet them. Some of them are laid-back about it, others are martinets who can rage, scream and bully their way to get what they want.

Kate Armstrong (Zeta-Jones) is among the latter sorts. The celebrity head chef at 22 Bleecker Street, one of New York’s trendiest and most outstanding restaurants, her prickly demeanor is tolerated by Paula (Clarkson), the owner, because Kate’s creations regularly win awards, coverage in foodie magazines and attract the hoi polloi to her restaurant. Kate’s personal life, what little she has of one, is strictly ordered as well, just the way she likes things in her restaurant.

Life has a way of bringing mess into the lives of even those who are meticulous about their circumstances; when her sister (Wade) dies suddenly, her niece Zoe (Breslin) is orphaned and Kate is named guardian to the little girl. Zoe is understandably distraught about her situation and acts out towards Kate who is thrust into a situation she is woefully unprepared for and never wanted in the first place.

Secondly, Paula has hired a new sous chef behind Kate’s back, which is irritating enough to the head chef, but that sous chef happens to be Nick Palmer (Eckhart), as boisterous and full of life as all get out. He loves to belt out opera in the kitchen and has a much more chaotic approach to cuisine. The two couldn’t be more oil and water. Naturally, they fall for each other.

In fact, just about everything about this movie is predictable, from the romance to the relationship between Kate and Zoe. We’ve seen both of those situations before; the can’t stand you/can’t live without you kind of love that grows via painful separations that force both parties to realize that they are better off together, and the sudden presence of a child in a driven career woman’s life that forces her to learn how to love and how to live. That’s a lot of cliches to pack in to a single movie, but they’re  all here.

Fortunately, the film is in the hands of the capable director Scott Hicks who has helmed some pretty sophisticated and acclaimed films (Shine, Snow Falling on Cedar). He also has some capable actors to work with. Balaban, who plays Kate’s shrink, has some of the best comic moments, listening to Kate’s remarks while sampling her sauces with a look of heavenly bliss on his face; some foodies just can’t hide their passion. Also Clarkson plays Paula with a delicate hand, never getting too hard or too soft. She is the ultimate Goldilocks here.

I’ve always had a soft spot in my heart for Zeta-Jones. I couldn’t tell you why; some of her performances can be a little bit hard-edged but when she allows herself to be a little vulnerable, she can act with the best of them. This is one of her finer performances, taking a character who is driven and obsessive and rather than making her bitchy, ends up making her worthy of admiration. That’s a tricky feat that even the great Meryl Streep had trouble with but Zeta-Jones pulls it off nicely here.

Hicks must really love food himself, or at least cinematographer Stuart Dryburgh must because the shots of the food being prepared and the presentation of said food is lovingly depicted and captured. You’ll never look at a plate of spaghetti the same way again after viewing this.

While I found Breslin’s performance to be a bit shrill, even she had moments that hooked me in, reminding me that she was one of the pre-eminent child actresses of all time, and continues to be a marvelous actress today as an adult. There is an oddball subplot concerning one of Kate’s neighbors, Sean, who babysits Zoe and appears to have a thing for Kate but nothing is done with it; the filmmakers could have easily had an offscreen neighbor do the child minding but for some reason chose to go this way. Methinks more of Sean was left on the cutting room floor than in the film.

This is based on a German film, Mostly Martha which I haven’t seen, although I understand it is much loved by many who have seen it and those who have seen both films typically state emphatically that the German version is much superior. I can’t speak to that, but if that film is better than this, then maybe I should make a point of finding it.. Despite the cliches and the flaws, the movie has a lot of heart and a lot of passion. It works as a dinner and a movie option, but also as a romantic evening option. Imagine that; a film that multitasks.

WHY RENT THIS: Nice work by Clarkson and Balaban.  Lovely food porn. Zeta-Jones takes a bitchy role and gives it some vulnerability.
WHY RENT SOMETHING ELSE: Chock full of cliches. Sean subplot goes nowhere..
FAMILY VALUES: Some sensuality and some mild profanity.
TRIVIAL PURSUIT: First feature film appearance by Kravitz.
NOTABLE HOME VIDEO EXTRAS: An episode of the Food Network’s Unwrapped centered around the film is included. Some of the Blu-Ray editions (those carrying the BD-Live feature) also includes an episode of Emeril Live on which Eckhart and Zeta-Jones both guested, with some of the food they are depicted cooking in the film made by Emeril Lagasse on the show.
BOX OFFICE PERFORMANCE: $92.6M on a $28M production budget.
SITES TO SEE: Netflix (Blu-Ray/DVD Rental only), Amazon, iTunes, Vudu, Flixster
COMPARISON SHOPPING: Chef
FINAL RATING: 7/10
NEXT: Films for Foodies concludes!