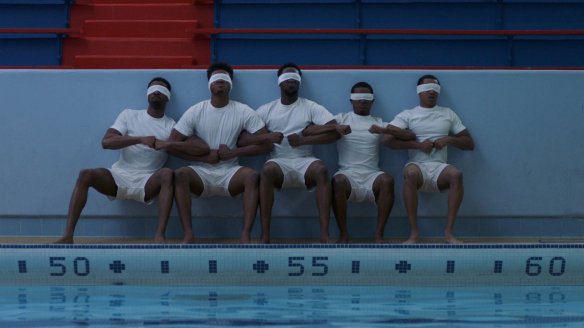 Fraternities and sororities have a time-honored place in the environment of higher education. They are brotherhoods (and sisterhoods) that develop outstanding young men and women, developing them for leadership positions in the future. Unsurprisingly, it takes a great deal of self-discipline and inner fortitude to gain admittance to these institutions.

Zurich (Jackson) is trying to do just that. Pledging the prestigious Lambda Phi fraternity at historically black Frederick Douglass University which claims Dean Richardson (Harris) as an alumnus, he and his four fellow pledges including Square (Horton) and Frank (Cole) undergo ferocious beatings and ritual humiliations that push their endurance beyond their limits. All of them endure these things with near-animal grimaces, telling one another that the rewards will be worth it. Dean Richardson tells Zurich that he is one in a long line of fine gentlemen to survive these rituals and that they serve to toughen them and give them the resilience he needs to be successful in life.

Zurich is not so sure. He suffers a broken rib during one of the beatings and is having increasing trouble with his breathing. His steady girlfriend Rochon (Hakim) is having problems with the amount of time he is devoting to his pledge brothers and is suspicious that he is cheating on her, although Zurich has not been. Keeping up his studies has also been difficult during Hell Week, a fact not unnoticed by his English professor (Woodward).

Each of the pledges has their reasons why becoming accepted by the fraternity is important to them. Zurich just wants to make it through Hell Night, which will end their pledge status and make them full-fledged Lambda Phi brothers but the Hell Night ritual is the most dangerous of all and the five young men will end up risking much more than their dignity to make it through.

While hazing has been outlawed by most colleges and universities, it still exists and there have been instances where students have died as a direct result of hazing rituals. These types of films are an opportunity to examine the mob mentality of human beings and how the desire to fit in sometimes overrules even the most basic of common sense. Sadly, Burning Sands doesn’t take advantage of the opportunity as much as it might.

That isn’t to say that the movie is a failure – far from it, in fact. There are some really outstanding performances here, particularly from Jackson and Horton who not uncoincidentally have the most well-written characters. The movie is mostly Zurich’s point of view as a matter of fact and this is his story much more than it is the other young men. Woodward, one of the best actresses of her generation doesn’t get a lot of screen time but utilizes every moment to weave a most satisfactory appearance in the film.

The women here are essentially ornaments which has been a disturbing trend lately; their characters are given little to do but kvetch at their boyfriends or screw whoever happens to be handy; harridans or whores is what they boil down to here and neither characteristic is particularly flattering. The not-so-subtle sexism dilutes the message somewhat.

Despite these glaring issues I still recommend the movie highly. There is an emotional payoff that ends up being earned – more than that I will not say so as to allow the movie to have maximum impact upon its viewer. While it’s not exactly rocket science to figure out well ahead of time that the pledges of Lambda Phi are headed down a road that leads to nothing good, how that plays out grips the viewer tightly even though it isn’t especially groundbreaking in terms of plot.

Sometimes a movie is greater than the sum of its parts and this is one of those occasions. The movie is flawed, certainly but strong performances can overcome a lot of sins. McMurray, one of the producers on Ryan Coogler’s brilliant Fruitvale Station, doesn’t reinvent the wheel here but tells the story well and show’s not a little potential in the process. While some of the violence may make those sensitive to such things a little faint, the rest of us will be left to wonder why such promising young men are willing to endure so much. There is a fine line between sadism and character-building and established ritual doesn’t excuse crossing that line. This isn’t always easy to watch but it is worth watching all the same.

REASONS TO GO: Jackson, Woodward and Horton all deliver fine performances. The movie takes on a very real issue of fraternity hazing.
REASONS TO STAY: Some of the things the pledges go through are sadistic and disgusting; the sensitive viewer may have trouble watching these.
FAMILY VALUES: There are all sorts of violence, sexuality and profanity.
TRIVIAL PURSUIT: The movie debuted at this year’s Sundance Film Festival; among the producers are rapper Common and comedian Reginald Hudlin.
BEYOND THE THEATERS: Netflix
CRITICAL MASS: As of 5/23/17: Rotten Tomatoes: 85% positive reviews. Metacritic: 63/100.
COMPARISON SHOPPING: Goat
FINAL RATING: 7/10
NEXT: Restless Creature: Wendy Whelan

We live our lives out for the most part in isolation. It is a horrible fate that we strive to avoid and when we find someone to share our lives with, we feel a certain amount of relief, as if we have finally received our membership card for the human race. However, when that is taken away from us, our careful façade can show cracks as despair and grief set our very souls to crumbling.

That’s where George Falconer (Firth) is. He receives news that his partner of 16 years, Jim (Goode) has perished in a car accident. This being 1962, George’s relationship with Jim is barely acknowledged and when George makes inquiries about the memorial service, he’s told in no uncertain terms that his presence is not welcome. Very civilly, he thanks the caller (Hamm) for the information, hangs up the phone and stares into the abyss.

Eight months later, the grief has far from subsided; it has multiplied, feeding on itself and growing exponentially until George can no longer stand it. He wakes up in pain every morning, and confides that for the first time in his life, he cannot see a future. Without a future, with an intolerable present, George makes plans to end his own life. He meticulously arranges his study so all the important papers will be easily found, and goes about the business of his last day on Earth.

In it, he will lecture his class at a Los Angeles-area college on the works of Aldous Huxley and set up a philosophical discussion about invisible minorities. He will attend a dinner with his old friend and ex-lover Charley (Moore), who yearns for one last go at a man she knows is lost to her, but she herself is lost so that has little meaning. He flirts with a Spanish hustler (Kortajarena) and with a kindly student (Hoult) but in the end he knows there’s a gun waiting for him in his bedside table.

This is the first directing effort by fashion designer Ford, who is credited from rescuing Gucci from bankruptcy and turning it into a billion-dollar brand name. As you would expect from someone with that kind of eye, extreme attention is paid to art direction, the meticulous detail of recreating 1962 is done with great authentic detail from the brand names to the attitudes. The Cuban Missile Crisis is in the background but never  becomes the centerpiece; it is a topic of conversation and colors the film a bit without being the focus. Ford also takes some artistic cues from famed Chinese director Wong Kar-Wei, using colors as emotional triggers in the film.

However, as impressive as Ford is, it is Firth who steals the show here. He was Oscar nominated for his performance here (which he didn’t win but it set the stage for his win earlier this year for The King’s Speech) and it was richly deserved. Firth has made a name for himself for playing uptight British sorts, and so he is here, so tightly wound that it seems at times that one pinprick in the right place will let loose a barrage of screams.

His scene in which he is notified of Jim’s death is reason alone to see the movie; he’s just talking on the telephone, sitting down but you look at his eyes, his demeanor, his body language – while he looks composed, you can see him disintegrating inside. There’s no tears, no dramatic gestures, just the quiet despair of a man who in the space of a few moments has lost everything that has any meaning to him.

Firth shuffles through the film with a grey, lifeless pallor which only heats up in certain instances. One of them is with Charley, the divorcee who in many ways is as lost and desperate as George is. Moore gives her life, not only reading the lines with the caustic cattiness that was perfect for the period and the character but also showing the vulnerability she is careful to keep away from the surface, but so intense is it that it appears without warning and despite her best efforts. Moore was nominated for a Best Supporting Dramatic Actress Golden Globe; she didn’t get an Oscar nomination but I doubt anyone would have complained had she received one.

The Christopher Isherwood novel this is based on is considered a touchstone of gay English language literature and it is indeed ambitious that Ford, who is also gay, would take it on as his first filmed project but in many ways this is a movie that needed to be made and having someone with the visual eye that Ford has made him the right choice for the role, despite his limited experience as a director.

There are those who have skipped this movie because of its gay themes, and to those folks let me say this; you may be uncomfortable with the expression of same-sex love and there is certainly a good deal of that here, but I never found it uncomfortable or intrusive. This is more accurately a portrayal of grief, of a limited ability to express that grief both publically and privately, and the character study of a man deeply wounded but who in the end finds a certain measure of peace. It’s a very good movie and gay or straight, you should make an effort to see it.

WHY RENT THIS: An amazing looking film perfectly capturing the period. Firth does an amazing job in the role of George.

WHY RENT SOMETHING ELSE: It’s a very slow-moving film.

FAMILY VALUES: There is a good deal of sexual content, as well as some fairly disturbing images. There’s also a little bit of nudity.

TRIVIAL PURSUIT: Firth nearly turned the role down and had composed an e-mail to Ford sending his regrets. He was about to send it when he was interrupted by a repairman who was there to fix his refrigerator. While the fridge was being repaired, Firth reconsidered and never sent the e-mail. Firth thanked the “fridge guy” when accepting his BAFTA award for Best Actor for the part.

BOX OFFICE PERFORMANCE: $24.9M on a $7M production budget; the movie was a hit.